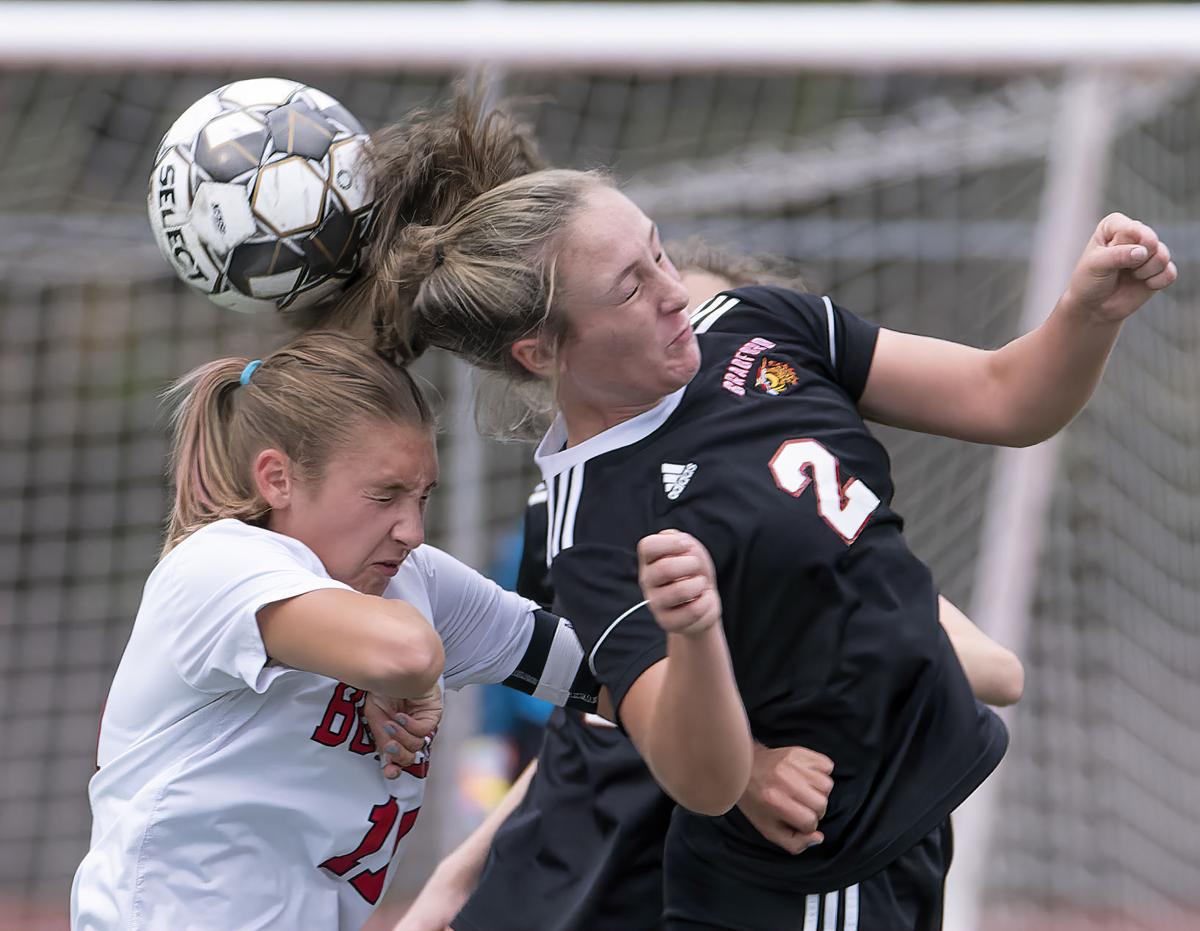 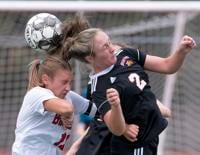 Bradford’s Kelsea Austin (2) contends for a header with a Meadville defender during the Lady Owls’ 6-0 win Tuesday at Parkway Field. 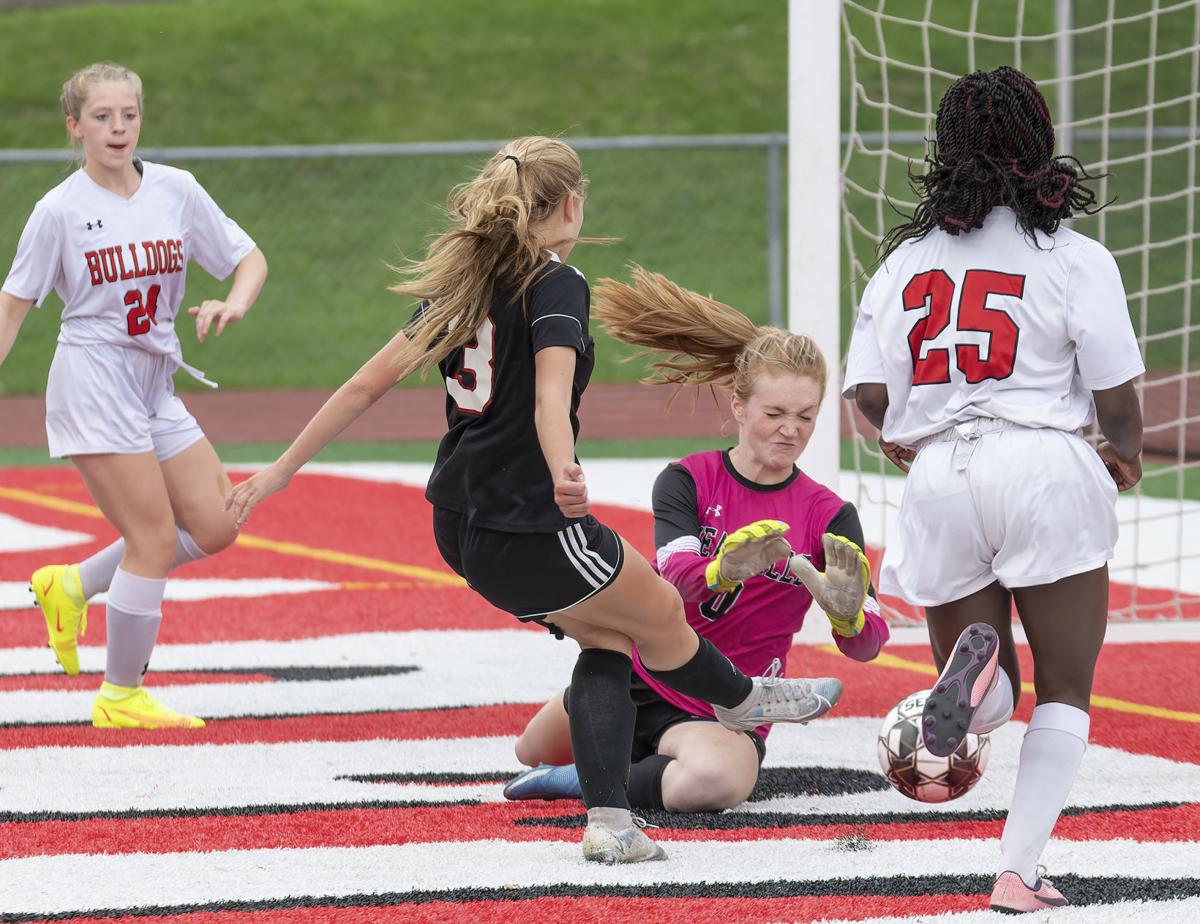 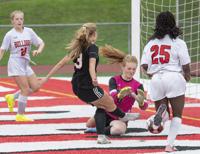 Bradford’s Maddi Cowburn (3) slides in her first of four goals during the Lady Owls’ 6-0 win over Meadville Tuesday at Parkway Field.

Bradford’s Kelsea Austin (2) contends for a header with a Meadville defender during the Lady Owls’ 6-0 win Tuesday at Parkway Field.

Bradford’s Maddi Cowburn (3) slides in her first of four goals during the Lady Owls’ 6-0 win over Meadville Tuesday at Parkway Field.

Bradford faced stiff resistance in the early portion, but a stellar performance from Maddi Cowburn and excellent defense gave the Lady Owls a comfortable 6-0 win.

Bradford won at Meadville handily in both squads’ last game. While the Lady Owls never looked in trouble at Parkway Field, it was far from an easy win.

Bradford had the ball in its offensive zone for almost 34 minutes of the first half, but only came away with two goals. Meadville keeper Laci Carlson had some good saves, but Meadville was able to force Bradford off the point of attack and play physical in the penalty box.

Aggressive defense worked early on. Bradford’s attackers were just slightly off target with their ball placement on passes.

A lazier team would have allowed Bradford time and space to corral the pass, but Meadville showed no fear in getting in the face of Bradford attackers.

“Passing was good and bad,” said Bradford coach Warren Shaw. “We moved the ball very well, but once again they packed the back end, so it’s very hard to penetrate the middle. Once we realized that, we were better. We did a lot of give and go. It’s just hard to play when a team packs the back end on you.”

The Lady Bulldogs could not win the middle of the field, however, and that doomed them. Bradford was rarely on defense. Meadville had precious few opportunities in their offensive zone, and they did not last longer than a couple minutes each time.

The Prince sisters, Bella and Emily, did a good job sending the ball back to midfield where Bailee Fitzsimmons, Eliana Kane and Lauren Placer pushed it forward while preventing any Lady Bulldog attack.

When a long ball from Meadville came through, it was sent back in a matter of seconds.

“I thought our back end did a great job of understanding how they (Meadville) were going to play,” Shaw said. “One pass and send it long is what they were trying to do. I thought our back line did a really good job there. I thought our sixes and (Kelsea) Austin did a good job controlling the middle of the field. We gotta get a little bit quicker with some of the passing in the middle.”

Passing was weaker than usual on Tuesday and will be something the Lady Owls tighten up as they start to finish the season and get ready for the playoffs.

The second half of the game was more of a struggle for possession. Bradford played well up front to put in two more goals, one from Emily Morgan and one from Cowburn.

Bradford keeper Daisy Paige did well in the first but wasn’t pressured much. She looked great in the second, making several saves and deflecting a well-placed corner kick from Phoebe Templin. That deflection went long to a Bradford player, who kicked it deep to Cowburn, who did the rest, giving Bradford a 5-0 lead.

Speaking of, Cowburn had some fantastic scores, not much of a surprise for anyone who has followed this team while she’s been a part of it. She earned a hat trick in the first half on her way to a four-goal performance.

Her second goal was an astounding individual effort, getting the ball and running by two defenders for 40 yards. As the goalie came out with another defender, Cowburn shot between the two of them for a 2-0 lead.

“I’m not worried about it cause she’s a fantastic player and she plays within the system very well too,” Shaw said. “If you watch, she has a ton of assists.”

Could the offense be more diversified? Yes, but the team does a great job of getting Cowburn into scoring position, they don’t rely on her making three defenders miss and hitting a miracle shot. And as the Lady Owls get healthier, more players should be able to provide firepower.

“We’re trying to get some players back healthy,” said Shaw. “We're at the tail end of six games, in what, eight days? That’s a rough run. We go back at it again Thursday and then Saturday. I think part of it has to do with some dead legs… I think (Austin’s) rounding back into where she needs to be… They (Bradford) run a lot. Not something for the faint of heart to be out here playing soccer like they do.”

It may be hard to do what the Lady Owls do, but they did more than just play soccer on Tuesday. It was Breast Cancer Awareness night, with several Bradford coaches wearing pink and the players walking out with players from the Bradford United Soccer Club.

The Lady Owls have a tough test on Thursday, playing at Warren. Bradford beat Warren at home earlier this season, the program’s first victory over the Lady Dragons in a decade.