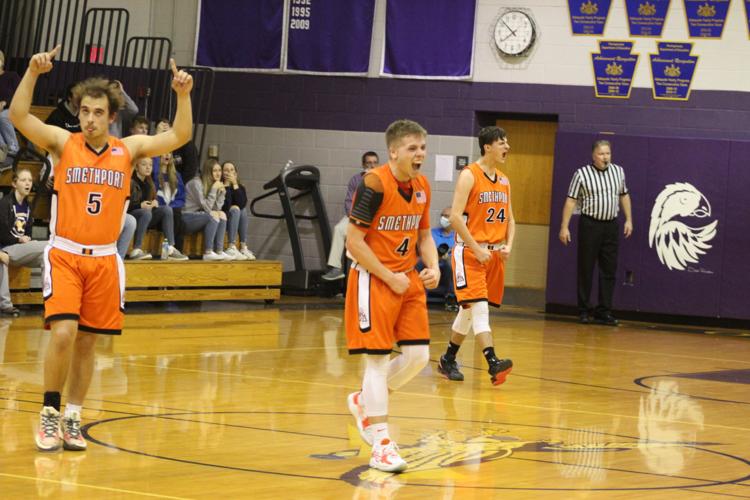 Smethport’s Brandon Higley (5), Alex Ognen (4) and John Adamoski (24) celebrate ahead of halftime during the Hubbers’ 73-50 Thursday win at Coudersport. The victory avenged a Dec. 15 loss to the Falcons at home. 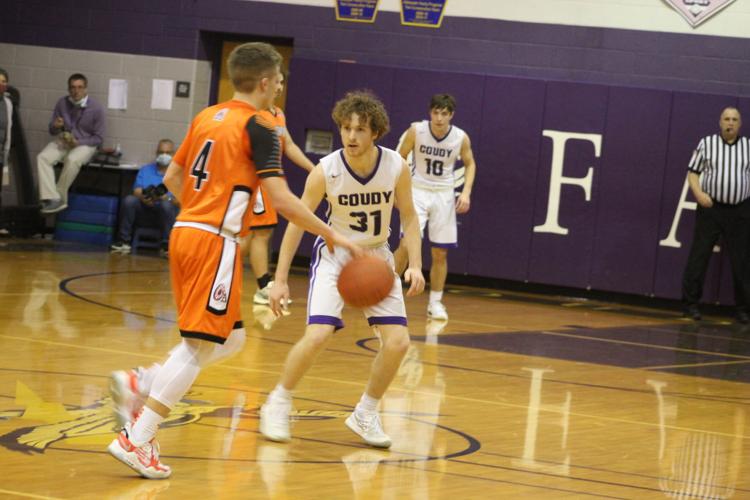 Alex Ognen (4) dribbles the ball up the court for Smethport while Coudersport’s Christian Furman (31) defends. The two combined for 60 points in Smethport’s win on Thursday.

Smethport’s Brandon Higley (5), Alex Ognen (4) and John Adamoski (24) celebrate ahead of halftime during the Hubbers’ 73-50 Thursday win at Coudersport. The victory avenged a Dec. 15 loss to the Falcons at home.

Alex Ognen (4) dribbles the ball up the court for Smethport while Coudersport’s Christian Furman (31) defends. The two combined for 60 points in Smethport’s win on Thursday.

They had played with their longtime North Tier foe close for 32 minutes in a Dec. 15 meeting at Smethport, but fell short on the game’s last possession. Thursday night at Coudersport, Alex Ognen and the Hubbers shot the ball so well, they ensured round two wouldn’t end the same way.

Ognen scored 40 points and the Hubbers shot the 3-ball at will, shocking the Falcons in a 73-50 victory.

“That was the best shooting performance we’ve had for sure,” Smethport coach Jay Acker said. “It just seemed like everything was working for us. Every shot we took looked good.”

Smethport was hot from beyond the arc from the opening tip. Ognen and Preston Alfieri each knocked down two 3-pointers in the first quarter as the Hubbers raced out to an 18-4 lead.

From there, Smethport’s offense didn’t slow until late in the game, as Ognen, Alfieri and Brandon Higley combined for 12 treys.

“Shooting for us has been a struggle, and I don’t know what happened tonight, but it all came together for us,” Acker said. “Our game plan was to try to push the ball a little bit, and maybe that got us some open shots more than usual. But the game plan wasn’t to shoot that many. It just happened that way.”

Ognen scored at will for much of the night, uncorking his arsenal of dribble-drive moves to offset his hot 3-point shooting. When the game got chippy down the stretch, he came through from the foul line, as well, sinking 9-of-11 attempts.

“(Ognen) was definitely on,” Acker said. “That was his best shooting night by far. It looked like every shot he took was going to go in.”

Alfieri finished with 18 points, all of which came from his six made 3-pointers. John Adamoski would add eight points, doing his damage in the paint.

“We wanted to try to drive the ball a little bit more and stay aggressive offensively,” Acker said. “Wanted to get the ball in the paint, and although we shot a lot of threes, I thought we got some good inside looks, too.”

The Hubbers successfully defended their lead the entire way, fending off Coudy comeback attempts by simply shooting the ball efficiently.

Christian Furman, who finished with 20 points for the Falcons, kept Coudy in it nearly single-handedly in the first half. The Falcons started to hit some outside shots later in the game, but couldn’t force enough stops to cut into the lead.

“I can’t fault our effort,” Coudy coach Scott Easton said. “They shot the lights out. Smethport executed better than we did and they deserved to win.”

A 3-pointer by Brady Streich brought Coudy within 11 at the end of the third quarter, but Alfieri answered with a trey of his own to start the fourth. That’s as close as Coudy would get.

“We tried to muck it up and play full-court, man-to-man (defense) in the second half,” Easton said. “Every run that we would make, they would knock down a three at some point.”

Garrett Kellert scored 10 points for the Falcons, while Andy Chen added eight. Coudy deployed a full-court press in an attempt to slow the Hubber offense, but couldn’t find the scoring to keep up.

“They did a good job of getting to the paint and kicking it out, and we were scrambling, playing hard man-to-man just trying to get back into the game,” Easton said. “Too big of a deficit against a good team.”

Smethport’s victory brought it back into the thick of the North Tier race, as the Hubbers not only improved to 3-2 in the league, but gained a game on one of the teams they’re chasing.

“It gave us confidence to know that we can play with them,” Acker said of the first meeting. “It wasn’t like we were going to come in here and get blown out. For us, this is a pretty big win.”