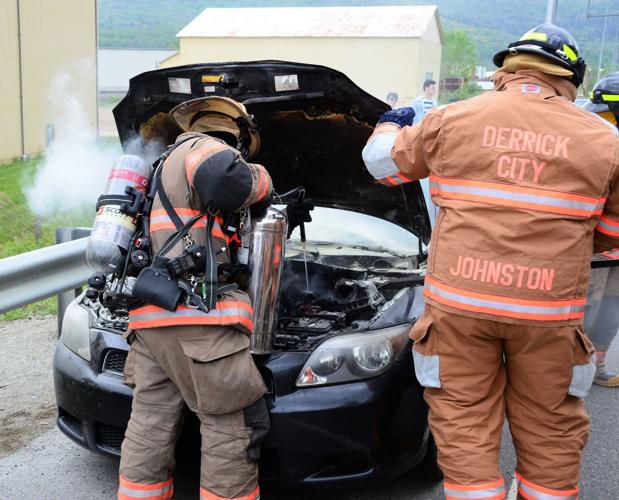 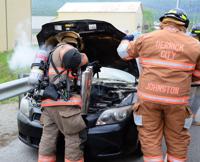 Derrick City Volunteer Fire Department Assistant Chief James Kelley uses a pressurized water can to extinguish a vehicle fire on U.S. Route 219 Friday afternoon. It was one of two vehicle fires the department responded to on Friday. 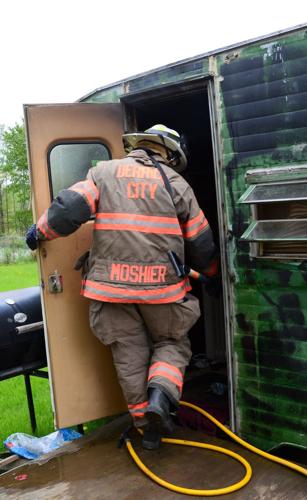 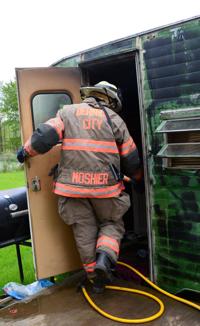 Derrick City Volunteer Fire Department Assistant Chief James Kelley uses a pressurized water can to extinguish a vehicle fire on U.S. Route 219 Friday afternoon. It was one of two vehicle fires the department responded to on Friday.

The fire department reported on social media that at 1:07 p.m., firefighters were dispatched to a fire in a small camper behind a Seaward Avenue home.

The owners had extinguished most of the fire before firefighters arrived. When firefighters came on the scene with two engines, they conducted overhaul.

They were at the scene of the Seaward Avenue fire for about one hour, the department reported. The Foster Township Police Department assisted on scene.

Just over two hours after the start of the first fire, at 3:19 p.m., Derrick City firefighters were called out again, this time to a vehicle fire in the northbound lane of U.S. Route 219.

According to the fire department, Foster Township police and a Derrick City firefighter used a fire extinguisher to knock down some of the fire, and more firefighters arrived with an engine, established command and extinguished remaining hot spots with a pressurized water can. More help arrived and helped with overhaul.

Crews were on the scene of the vehicle fire for about 30 minutes. The vehicle was towed from the scene.

The department reported that both fire were accidental, caused by electrical issues. They did not report that anyone was injured.