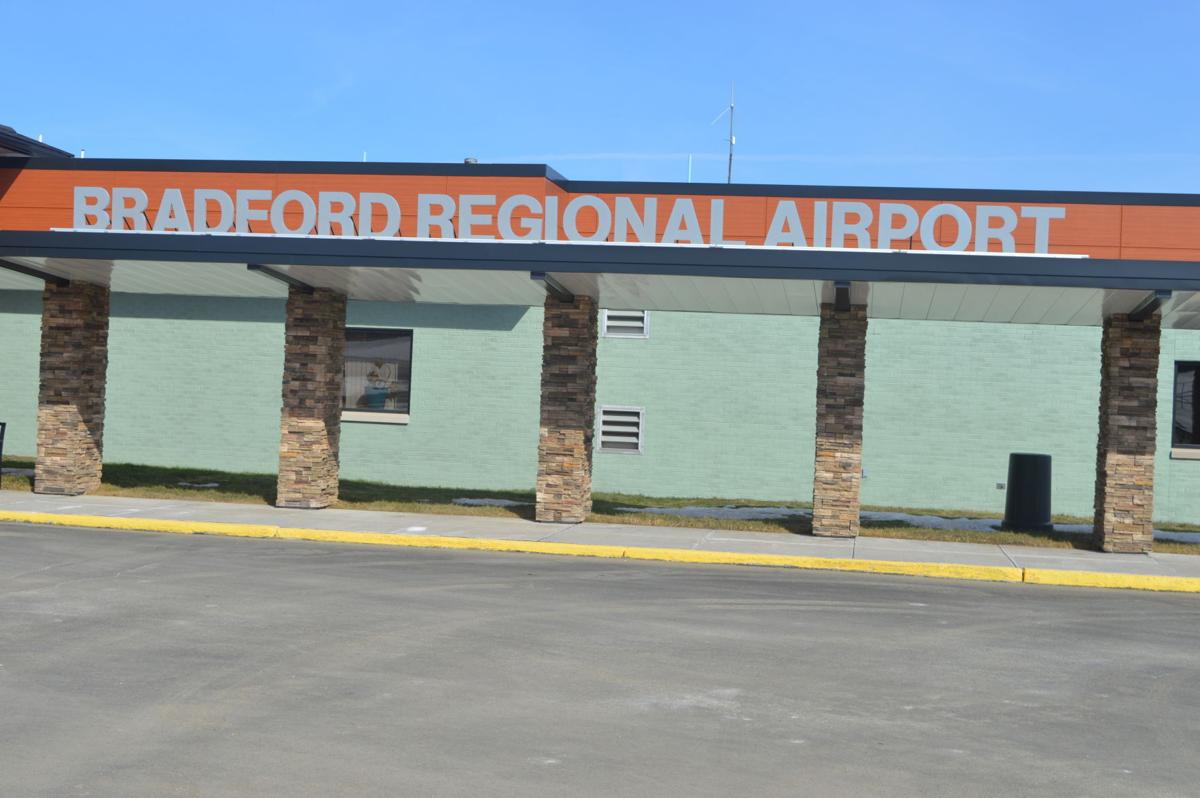 The terminal at Bradford Regional Airport has a new look. 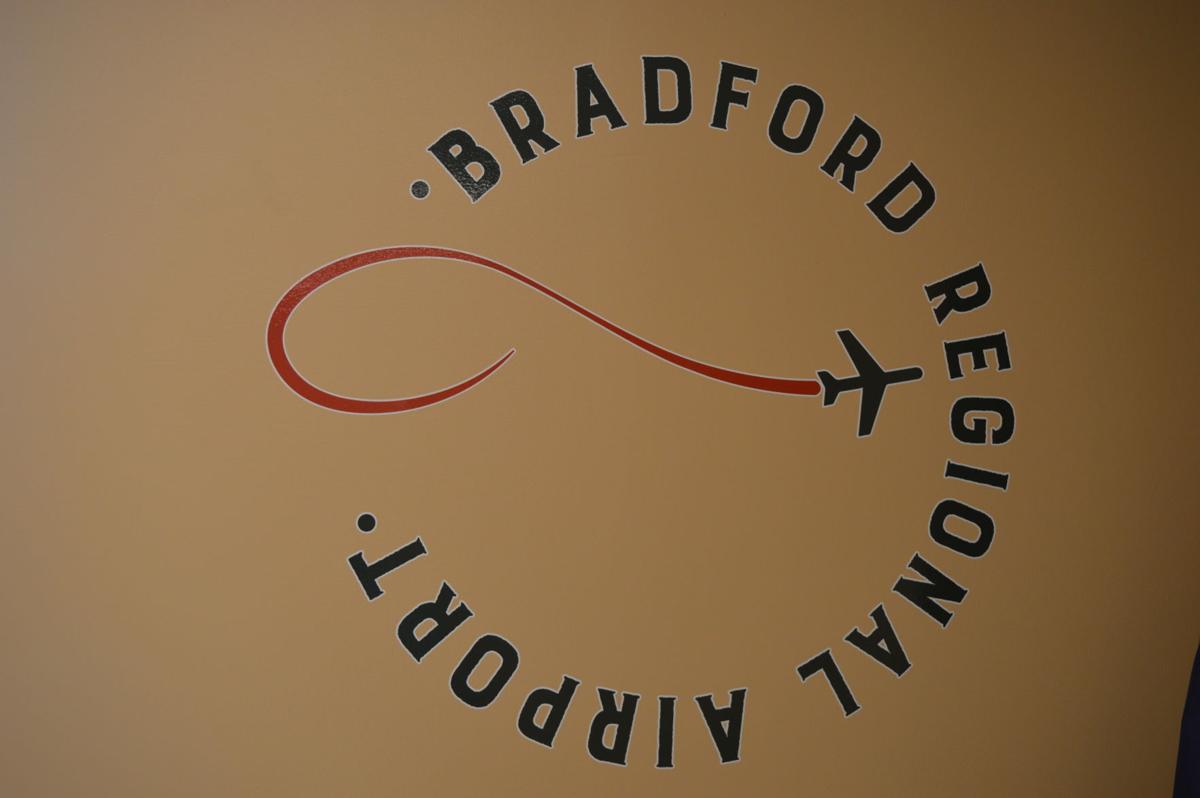 The new logo for Bradford Regional Airport is shown.

The terminal at Bradford Regional Airport has a new look.

The new logo for Bradford Regional Airport is shown.

MOUNT ALTON — The rehabilitation of the terminal building at the Bradford Regional Airport is finished — both inside and outside.

At the May 2019 meeting of the Bradford Regional Airport Authority, Ethan Hine, vice-president and chief architect of KTH Architects in DuBois, showed architectural renderings of the terminal’s planned upgrades, which included major interior and exterior improvements that affected almost every section of the building.

Among the interior improvements are LED lighting throughout the building, new gas fireplace and boiler, new flooring, as well as remodeled restrooms, stone columns, digital marketing space, a warming-up space and increased space for non-airport related events. The painting and furniture add to the facility’s warm and inviting appearance.

One of the project’s new additions is the PA Wilds Conservation Shop. “While it is not open yet, this shop will feature items similar to those available at the PA Wilds Shop at the Kinzua Bridge Visitor Center,” Dankesreiter siad.

Dankesreiter said, “Construction began in January 2020 and wrapped up in July 2020.”

Funding for this $800,000 project came from the airport authority and Pennsylvania Department of Transportation’s Bureau of Aviation.

Many of the plans adhered to the development objectives as set forth in the PA Wilds Design Guide for Community Character, Dankesreiter noted. In fact, this rehabilitation project received the 2019 Pennsylvania Wilds Center for Entrepreneurship Inc. Great Design Award.

The Bradford Regional Airport is now known as “Gateway to the PA Wilds” — the magnificent region of more than six million acres of natural assets in Cameron, Clarion, Clearfield, Clinton, Elk, Forest Jefferson, Lycoming, McKean, Potter, Tioga and Warren counties that includes 29 state parks, eight state forests, 50 state game lands Allegheny National Forest, one of the largest elk herds in the East, as well as hundreds of miles of land and water trails and trout streams.

Southern will begin flights from Bradford to Dulles Washington International Airport, bringing back a destination that proved to be popular with Colgan Air as United in 2007 and 2008. “Tickets should be on sale in mid-April.” Dankesreiter said.

“We will fly to Dulles in addition to our daily service to Pittsburgh,” stated Dankesreiter. “Bradford has significant passengers who either like to connect through or stay in Pittsburgh, including the University of Pittsburgh at Bradford community.”

Washington Dulles will more than triple the number of connections available at Pittsburgh. According to Dankesreiter, “We feel this will allow us the greatest opportunity to, if not increase enplanements this year, at least hold steady until travel returns to normal, ensuring our survival in the Essential Air Service program.”

Late in 2020, the U.S. Department of Transportation announced Bradford remained eligible for the EAS for another two years.

Speaking about the two destinations from Bradford, Dankesreiter said, “This dual hubbing will allow us to continue to serve our robust Pittsburgh base while also recapturing lost business and international travelers.”

An ad hoc committee assisted the Bradford Regional Airport Authority in preparing a marketing package for Southern’s pending service to Washington Dulles. This group that was formed several months ago, consisting representatives of the airport, local business and tourism leaders and Southern employees, Mark Cestari, chief operating officer, and Ryan Dach, director of security, has been meeting monthly.

Southern Airways Express has interline agreements with American Airlines and European carrier Condor. Designed for the convenience of the partnership’s customers, these agreements permit passengers to book a seamless travel experience from any Southern Airways Express-served city to American’s destinations around the world and to Condor’s hub in Frankfurt, Germany. These connections include single-point check-ins at the local airport for the entire trip and checked baggage that is delivered to the final destination.

Dankesreiter noted that Southern Airways Express is now in talks with United about codeshares, agreements between airlines to sell seats on each other’s flights providing destinations and flight choices.

Now into the second year of the COVID-19 pandemic, airline passenger numbers are starting to rebound, but Dankesreiter sees this as a slow climb. Business travelers are not expected to even approach 2019 peaks until possibly 2023 or 2024. “Leisure travelers will rebound faster as there is a pent up demand for vacations. We can see evidence of this in what routes airlines are adding. Pittsburgh has just added new service to Key West and other Florida destinations.”

What originally was supposed to be an emergency landing field for the Army in World War II — the war ended before land was cleared — became the site of the current Bradford Regional Airport. Commercial airline service began in 1948 even though the terminal building would not be completed for another ten months.

When the high costs of airport operations became too costly for the city, the county was added as a partner. Then it became the Bradford-McKean airport.

At the recommendation of the Federal Aviation Administration in 1967, the facility became a four-county airport by an authority whose members represented McKean, Warren, Elk and Cameron counties. After being an authority member for more than 30 years, in 2010, Elk County ceased its share of funding for airport operations, due in part to annual costs of $24,000. However, county officials, realizing the airport’s regional importance, wanted to remain represented on the authority.

Of the airport’s two cement-asphalt runways, 14-32, at 6,036 feet long and 150 feet wide, is in the top ten longest runways in Pennsylvania, allowing Boeing 737s to land, Dankesreiter told The Era. “The majority of aircraft that size landing here are bringing in basketball teams to play at St. Bonaventure.”

There were no renovations done to the airport’s restaurant, The Runway Bar & Grill, as part of this project.