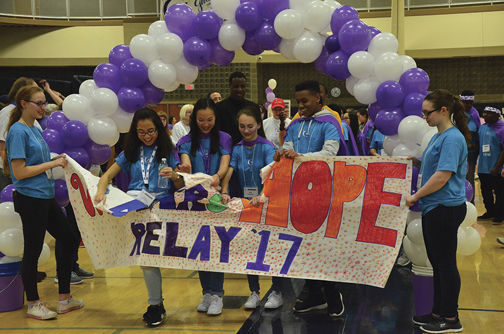 Gates Chili School District students organized teams to participate in the Relay for Life event to raise money for cancer research, some of which is done locally at the University of Rochester. 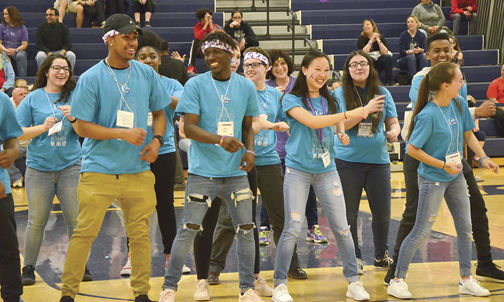 During the past several years of holding a Relay for Life event, Gates Chili School District participants have raised over $225,000 for cancer research.

During a survivor’s lap at a Relay for Life event in the Gates Chili School District, many students were stunned to see Paula LaManna, the coordinator of volunteers and service learning, take to the track wearing her survivor T-shirt.

Although many of the students had a personal connection to cancer, LaManna’s participation in the survivor’s lap was proof of the efficacy of the cancer research they were raising money to support.

LaManna was diagnosed with stage 1 breast cancer in 2013. Post-treatment, she has beaten back the dreaded illness and is now doing what she can to help others facing their own battles. LaManna now serves as the Relay for Life adviser in the school district and helps raise money for cancer research.

This year, LaManna and her students raised a whopping $21,000 for research, which is done locally at the University of Rochester.

“We know we live in a generous community, but it was surprising to see how much we had at the end of the event," she says. "We went into it with only $12,000 raised, but the rest of it came in that night, which was pleasantly surprising.”

Gates Chili is indeed generous when it comes to giving to the Relay for Life event. During the past several years the community has raised more than $225,000 for cancer research, LaManna says.

One reason behind the community’s generosity lies in how cancer touches the lives of so many people, regardless of race, sex, age and income levels. Because cancer in all its forms becomes more and more common, LaManna says it's easier to get people to participate in the Relay for Life.

And she’s not the only cancer survivor in the group of 24 students she advises. One student is a survivor of childhood cancer, she says. There are also numerous students within the group who have relatives with cancer or have lost someone to cancer, including Jordan Johnson, whose mother was taken by a brain tumor.

“It was so great to see Jordan grow through this experience and take on leadership after the loss of his own mother,” LaManna says.

Another inspiring story the Gates Chili students saw comes from a 5-year-old cancer patient from the community who joined LaManna on the survivor’s walk. The boy, who has struggled with cancer most of his short life, was carried on the lap because his legs were too weak to make the walk.

LaManna says seeing a cancer survivor that young was not only inspiring, but also heart-wrenching as the disease does not spare the young and innocent.

“Many of us were close to crying watching him take his lap,” she says. “Seeing him out there, that’s reason for many of us to keep doing it.”

Those stories of survival, as well as stories of loss, resonate with and inspire many students who took part in the relay, including 16-year-old junior Kevonna Buchanan. The story of Jordan’s loss, as well as the cancer stories friends shared, gave Kevonna the strength to help the relay team raise the funds for cancer research.

“My grandmother is a breast cancer survivor,” Kevonna says. “Tragically, almost everyone has experienced a friend or loved one being diagnosed with cancer, and even worse, maybe had lost someone due to the horrid disease. This alone fueled many of us to join the Gates Chili Relay Committee.”

As Buchanan became more and more involved with the relay team, she quickly realized that weekly participation would be “better use” of her time. This was her first year on the relay team and she said it certainly wouldn’t be her last. Not only will she participate during her senior year at Gates Chili, she intends to keep on with the effort in college as well. Her role in supporting Relay for Life keeps her involved with the Gates Chili community, as well as the broader community of cancer patients and their families.

“Honestly, who doesn’t want to defeat cancer once and for all?” she says.