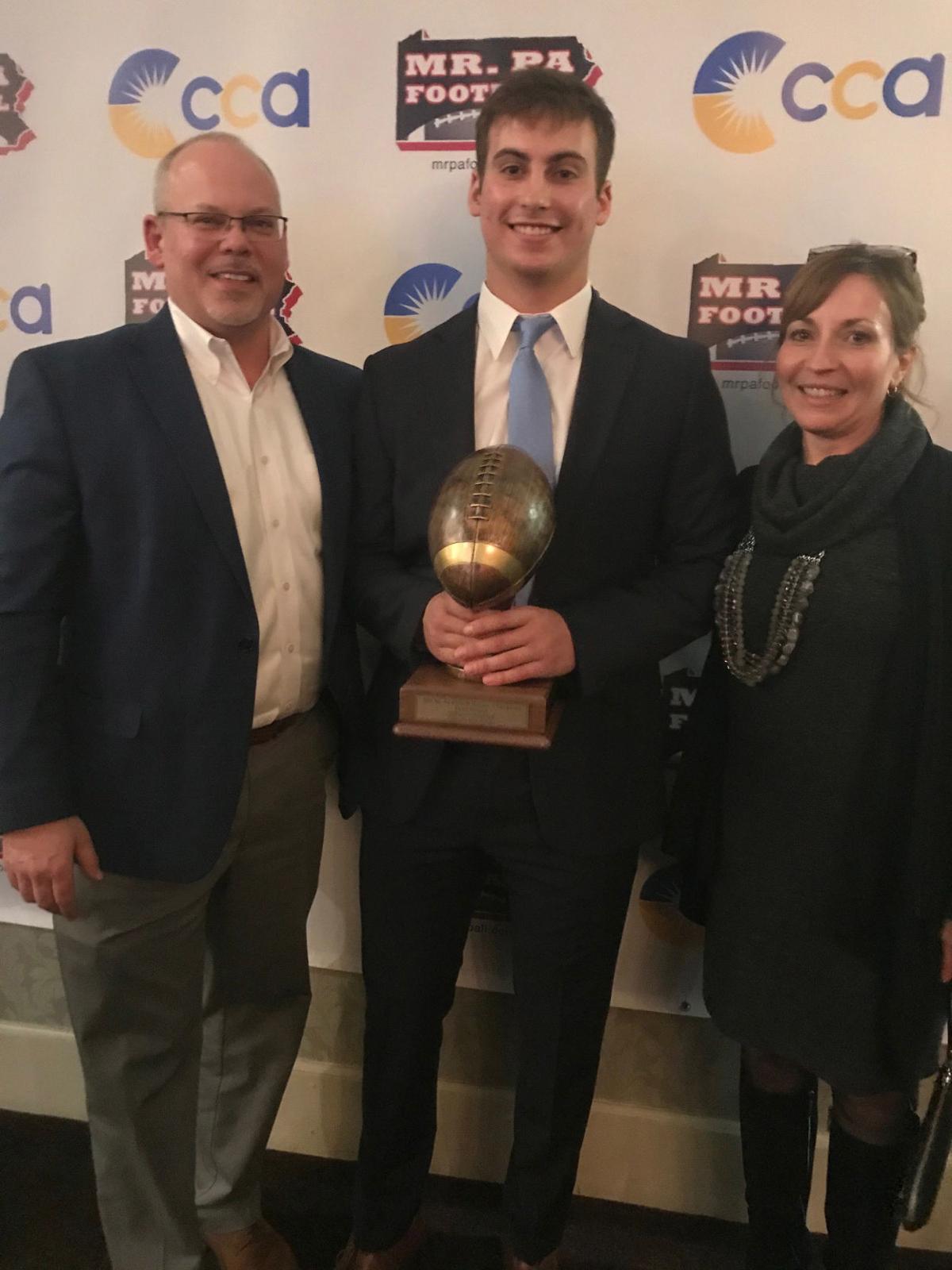 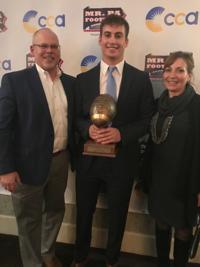 Evan Simon is joined by his father, Chris, and mother, Michelle, after winning the 2019 Mr. PA Football Award for classes 4A to 6A. Simon threw for over 8,000 yards and 86 touchdowns while playing for Manheim Central. 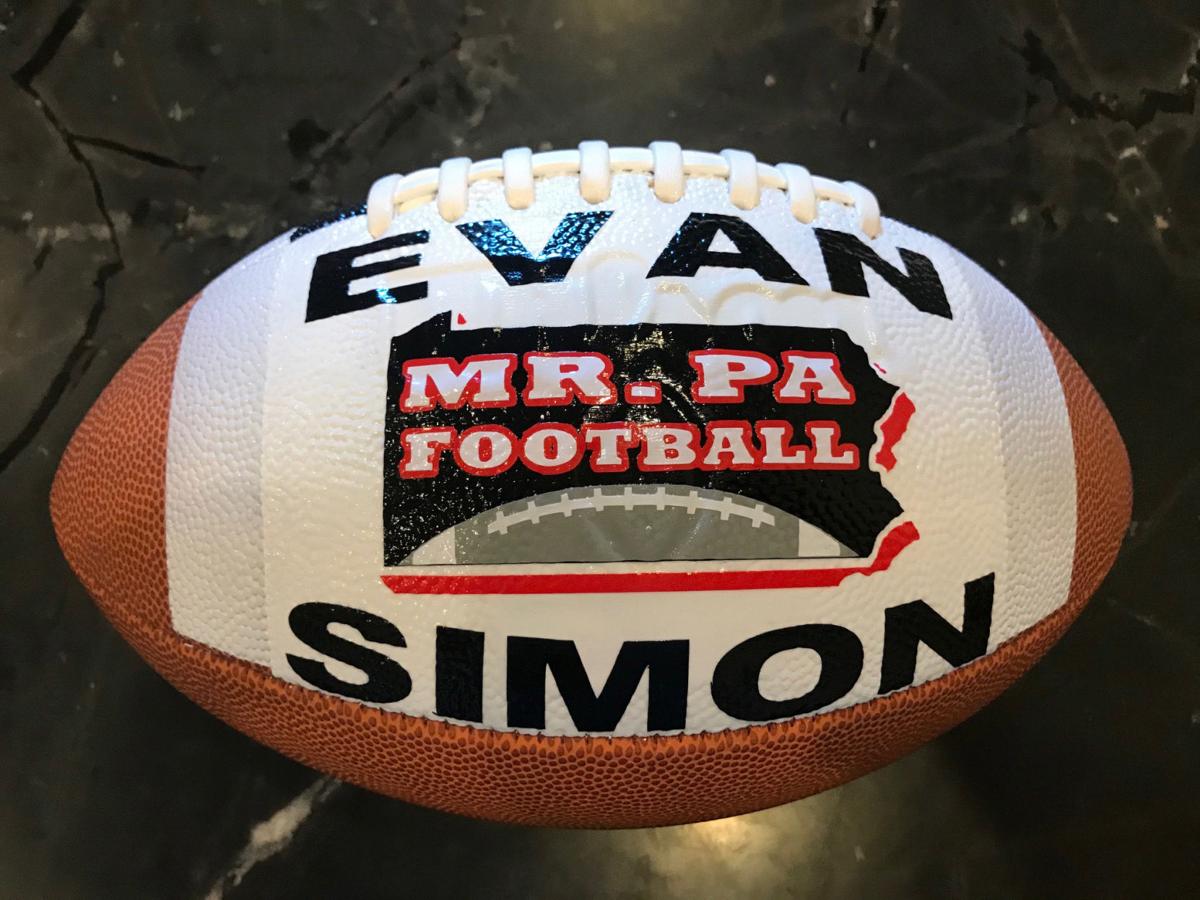 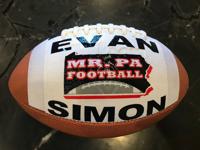 Evan Simon was awarded a commemorative football for winning the Mr. PA Football Award in 2019.

Evan Simon is joined by his father, Chris, and mother, Michelle, after winning the 2019 Mr. PA Football Award for classes 4A to 6A. Simon threw for over 8,000 yards and 86 touchdowns while playing for Manheim Central.

Evan Simon was awarded a commemorative football for winning the Mr. PA Football Award in 2019.

PISCATAWAY, N.J. — The list of past winners for the Mr. PA Football Award in classes 4A to 6A includes Saquon Barkley, Miles Sanders and D’Andre Swift.

And in 2019, another talented football player, one that happens to have plenty of Bradford ties, was added to that prestigious list: Manheim Central quarterback Evan Simon.

Simon, who graduated from Manheim — a District 3 school in Lancaster County — a semester early in January, committed to play football at Rutgers University next year.

At the time of his commitment, Simon was ranked as the 12th-best recruit in Pennsylvania and the 38th-best “pro-style” quarterback in the entire country, according to 247sports.com, and had offers from several other Division-I programs like Syracuse, Pittsburgh, Minnesota and Colorado.

“He’s a very good athlete,” Rutgers head coach Greg Schiano said in an interview with the Big Ten Netork. “He’s got a great mind for the game. He can throw the ball, he can run the ball. He’s a winner. I enjoy just being around him. Great family, great program. I sure am glad the previous staff recruited and got him committed.”

ALTHOUGH Simon was born and raised in the southern part of the state, his ties to Bradford run deep.

Evan’s dad, Chris, was born in Bradford and spent his childhood here before relocating. He is a financial advisor and routinely makes trips back to McKean County to meet with clients and is still active as a member of The Bradford Club.

Evan’s grandfather, Steve, was the former president at Pine Acres Country Club and lived on West Washington Street with his wife, Kathy, for nearly 50 years. The couple left the area and moved to Virginia a few years ago.

The elder Simon said his son, who politely declined to be interviewed for this story, hasn’t been back to the area in eight or nine years, but used to visit frequently as a kid.

And if he hasn’t had much free time to make the drive back lately, you can certainly excuse him with what he’s done on the football field.

Almost immediately after stepping on the field for Manheim Central, which plays in the Lancaster-Lebanon League, Simon began to put up some outrageous numbers.

Amid uncertainty about himself and the 2020 season, Aaron Rodgers says, ‘I don’t know what the future holds’

NCAA: Athletes must have scholarships honored if opting out of season over COVID-19 concerns

The 6-foot-3, 200-pound passer threw for over 8,000 yards and hit 86 touchdowns passes in his three years as the school’s starting QB. He owns nearly all of Manheim’s career passing records, and in his senior season — the campaign that ultimately catapulted him to the award after being a two-time finalist — he went 154-of-270 through the air with 25 touchdown passes. He also rushed for 930 yards and 15 TDs.

Simon led the Barons to a 9-3 record in 2019 and into the second round of the uber competitive District 3 playoffs.

The year before that, Simon paced the Barons to a 14-1 record and into the PIAA Class AAAAA state championship game, where the team fell just short to Penn Hills.

He finished his high school career with a 36-5 record.

“Evan was our go-to guy for much of three years,” Manheim head coach Dave Hahn said at the Mr. PA Football banquet held in Harrisburg in March. “Even as a sophomore, we relied on him heavily and did a lot of things with him. So he did a lot for our program, and we’re just awfully proud of him.”

AT Rutgers, Simon is expected to compete with three other Scarlet Knights quarterbacks for playing time in 2020, according to several Rutgers football blog sites.

Rutgers has gone a dismal 13-47 over the past five seasons, but optimism is high in Piscataway with the return of Schiano — who led the Scarlet Knights to four bowl victories during his first stint there — and some of the assistant coaches and recruits the veteran coach has brought in.

Though the coronavirus has severely impacted his spring workout and practice schedule and how much time he’s been able to spend with his new teammates, Simon is still confident that he can work hard for a spot on Rutgers’ roster and help the largest college in New Jersey return to football prominence.

“I’m just going to compete my butt off,” Simon told the Liltz Record in March. “I’m being a sponge right now. I’m doing everything I possibly can, from working out to the whiteboard, and it’s going well. I’m picking it up quickly.”

The Scarlet Knights begin the 2020 season on Sept. 5 with a home date against Monmouth.