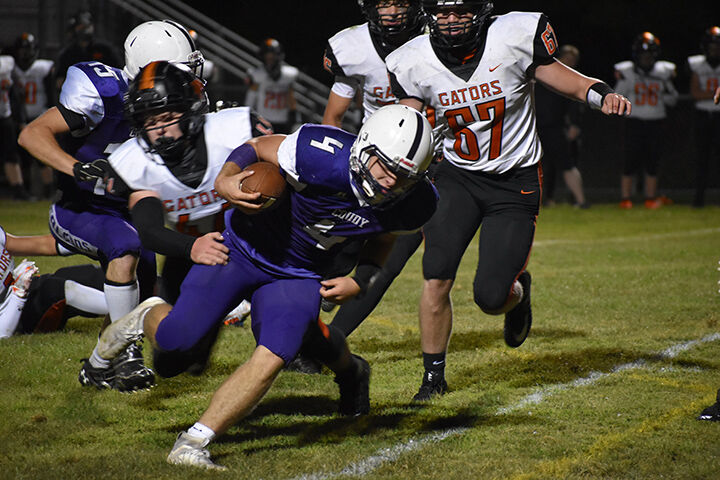 Coudersport quarterback Hayden Keck (4) plunges into the end zone for the Falcons against Port Allegany earlier this season. Keck and Coudy square off with rival Smethport tonight in Coudersport. 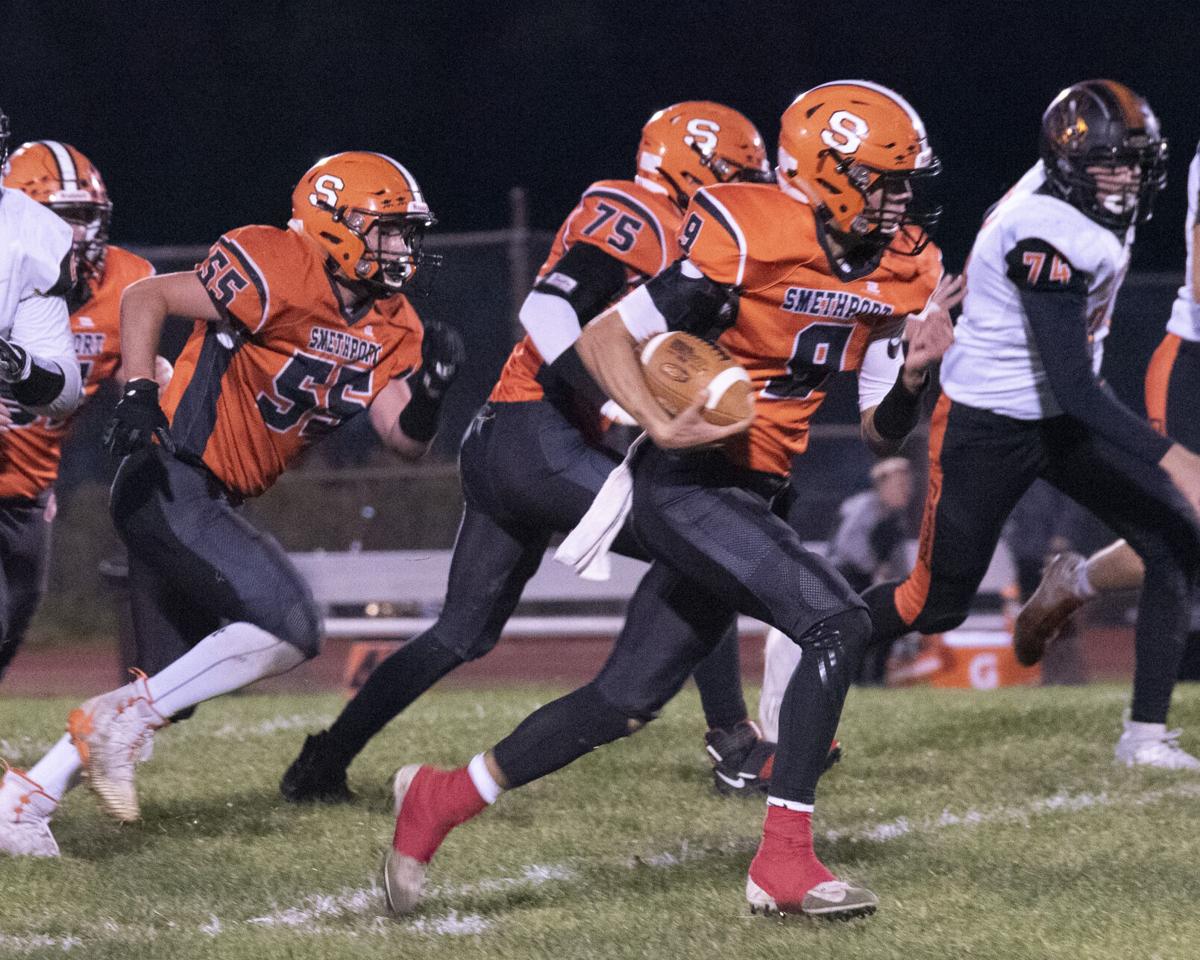 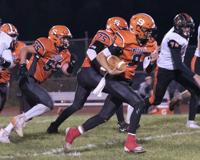 Smethport quarterback Noah Lent (9) gets loose during the Hubbers win over Port Allegany earlier in the season. The Hubbers face rival Coudersport tonight with the North Division’s top spot on the line.

Coudersport quarterback Hayden Keck (4) plunges into the end zone for the Falcons against Port Allegany earlier this season. Keck and Coudy square off with rival Smethport tonight in Coudersport.

Smethport quarterback Noah Lent (9) gets loose during the Hubbers win over Port Allegany earlier in the season. The Hubbers face rival Coudersport tonight with the North Division’s top spot on the line.

COUDERSPORT — It’s become the top rivalry in District 9’s Small School North Division, and the latest chapter in that series gets written tonight.

Smethport and Coudersport, both 4-0, are set to battle for the North Division’s top spot in each team’s regular season finale at 7 p.m. The winner will host a District 9 Class A semifinal game next week against Union/A-C Valley, while the loser will travel to Redbank Valley for its postseason matchup.

“We’ve talked about it for a couple years now, wanting to play in important games,” Smethport coach Adam Jack said. “This is another one of those games. We’ve got our sights set on a District 9 title, and this is another step along the way.”

The intensity of the series isn’t lost on him, either.

“Certainly, we’ve built a rivalry with Coudersport over the last couple years, and with both teams being undefeated, (the game) does carry more weight.”

And of the possibility of hosting a D9 semifinal, Jack said, “We’ll play anybody anywhere, but certainly we’d like to earn the right to host a playoff game.”

Storey, meanwhile, acknowledged the magnitude of the test, but said the mantra has been the same within his program since Day 1: Take things game by game and one day at a time. To that end, the Falcons haven’t discussed anything regarding the postseason and are simply focused on this week.

“We’re just cleaning stuff up as we’ve gone through the year. It’s the same learning and everything we’ve been doing all year long,” he said. “As I’ve said before, it’s game by game, and this is another game. It’s a big game; we know that. But we’re practicing like we always do.”

High stakes are nothing new in the series. In 2018, Smethport kept its undefeated season alive with a come-from-behind 21-20 win over the Falcons in the regular season finale before Coudy exacted revenge in the D9 Class A championship with a 44-7 thumping of the Hubbers.

Last season, the teams met twice more, and both games resulted in big Coudy wins, with the Falcons taking the regular season matchup 42-0 while holding Smethport to just 42 yards of offense and cruising to a 35-6 victory in the D9 semifinals.

And while Coudy has controlled the series of late, Storey says each year brings something different, and that the Falcons know this will be a challenge, even with prior big-game success against Smethport.

“I think (the experience) does benefit us, but some of the younger guys haven’t been in this situation, so it’s new for them,” he noted. “We hope they’re ready to go, and I think they are … it’s tough for them sometimes to grasp where we’re at, but we’re doing our best to keep them focused on the game and letting everything else take care of itself.”

Among Coudersport’s players with noted experience are most of the Falcons’ offensive line and quarterback Hayden Keck.

Back along the line are 2019 Big 30 All-Star Cale Ayers, as well as Brandon Goss, Kaden Blaniar and Dylan Hajzus.

Keck, meanwhile, has simply dominated his competition this season. He leads Coudy’s option attack in rushing with 531 yards and 11 touchdowns on 43 carries — an average of 12.3 yards per carry. He’s also thrown for 280 yards and three scores.

“Our offense tends to put some pressure on them, so that’s what we’re hoping to do,” Storey said.

To counter that versatility and option scheme, Jack says the Hubbers will have to play disciplined defense and make sure to take care of assignments.

“All night long, we’ll have to play disciplined, because if you make one mistake, you pay for it, especially with an athlete the caliber of Hayden Keck running (the offense),” Jack said.

On the flip side, Jack feels his team — which has plenty of big-game experience of its own with back-to-back playoff appearances — matches up well with Coudersport in terms of speed and athleticism. That’s something the Hubs want to take advantage of throughout the game.

“(Our coaches) have some things designed to take advantage of our kids’ capabilities,” he said. “I think that we made some changes in the offseason that take advantage of the skill sets of our key players, and I think that’s been reflected in the first four games ... defensively, it’s no secret we play an aggressive style, which matches that athleticism of our kids.”

When Smethport does have possession, it largely relies on three key playmakers — quarterback Noah Lent, running back Braedon Johnson and receiver Ryli Burritt. In front of that trio is an experienced line with six letterwinners from 2019: Kameron Rounsville, Adenn Stevens, Michael Tanner, Tyler Howes, Travis Cooney and Keegan Watson.

Lent leads the team in both passing and rushing. Through the air, he’s accumulated 416 yards and 10 touchdowns on a 21-for-41 season to date. He’s been picked off just once.

Johnson, a 2019 Big 30 All-Star, has run for 442 yards and five scores on 66 carries. Burritt has hauled in eight receptions for 191 yards and five touchdowns this year.

“Obviously, we’re looking at Lent, and we’ve been watching him for three years now,” Storey said. “And then Braedon Johnson has been tearing it up on the film we’ve been watching. We also know they have good hands for Lent, and he has some guys he can throw to. They’re a full package.”

But, he maintains that Coudy should be able to match Smethport’s abilities at skill positions, even if his team is less experienced in that department. As such, both Storey and Jack are confident in their squads, but also know it’s going to be a battle.

“I think we’ve got a lot of the same talent,” Storey said. “Ours might be younger, but I think we match up well, and we’re looking forward to it.”

Added Jack, “We’ve had a great week of practice so far on both sides, and the kids have played confidently all year long. We go into this game with high expectations.”