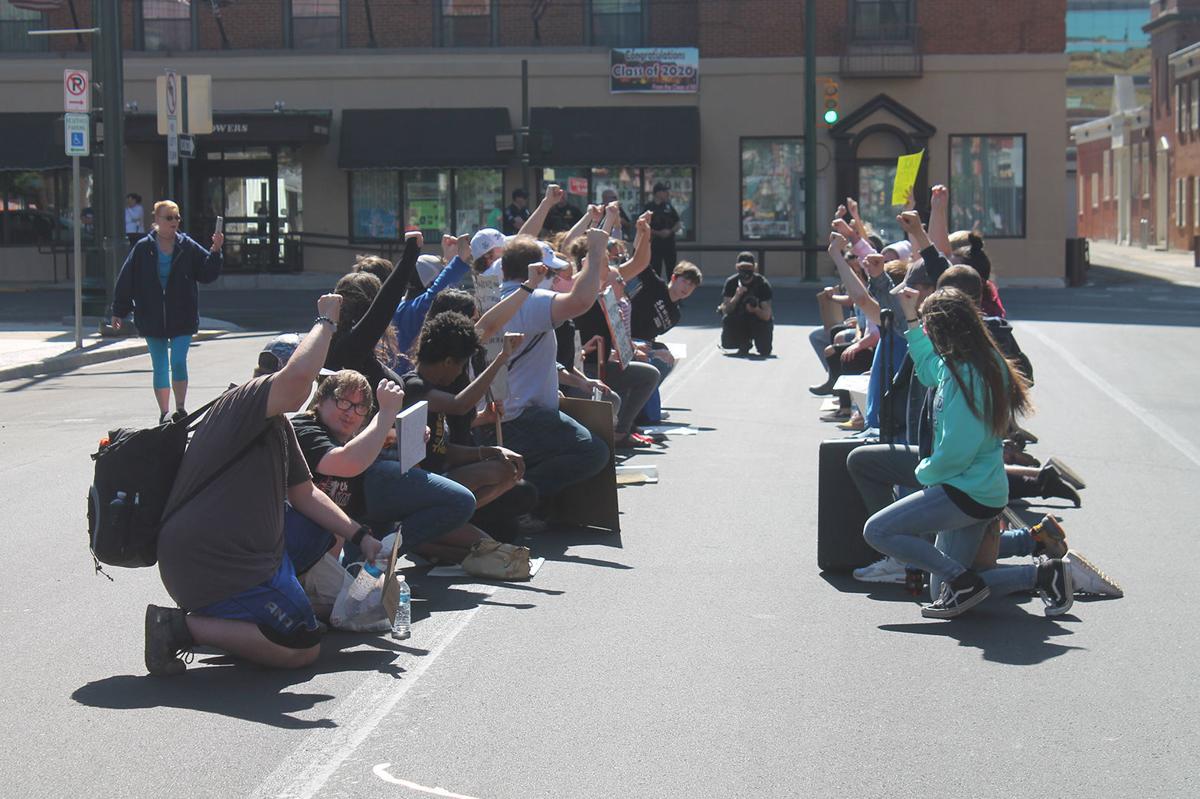 Protesters along Main Street kneel and raise a fist in the air during a Monday afternoon demonstration against the death of George Floyd and racial injustice. Roughly 40 protesters were present at the event’s peak. 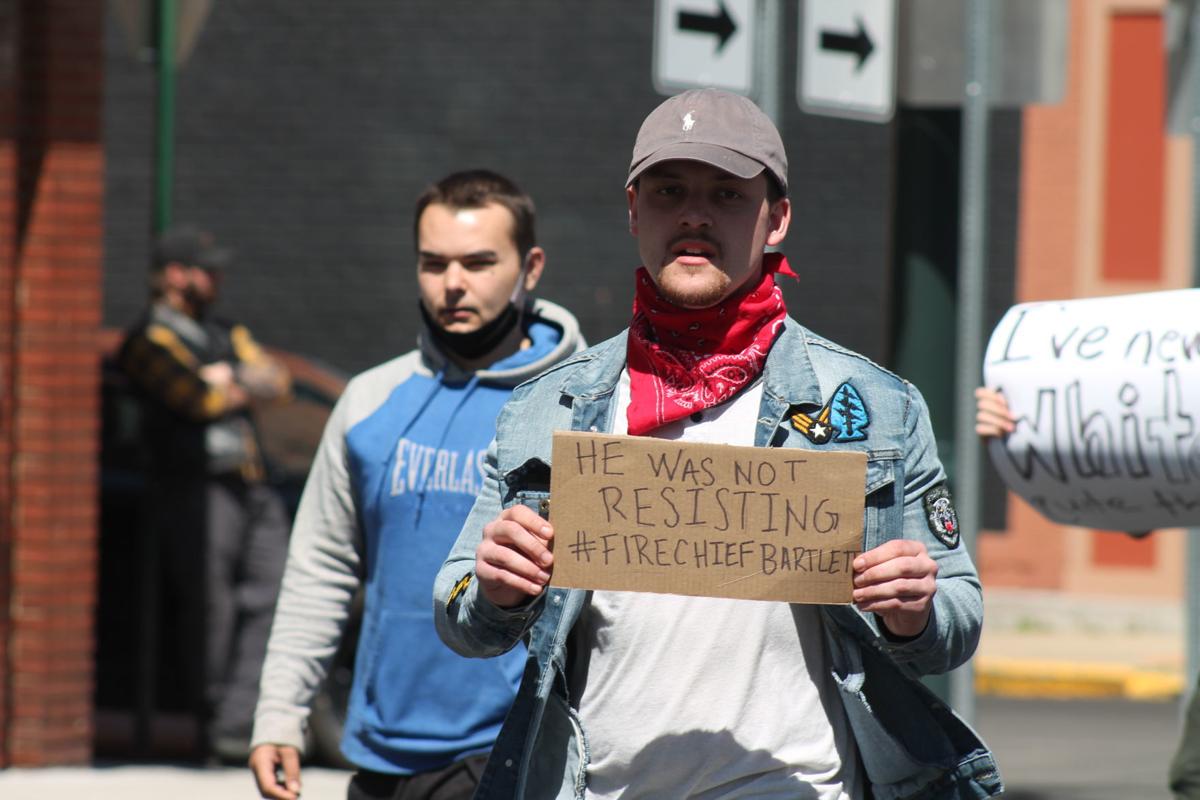 A protester at Monday afternoon’s demonstration carries a sign that reads “He was not resisting #FireChiefBartlett” in reference to Bradford Police Chief Hiel “Butch” Bartlett, who was placed on administrative leave in mid-May due to a misconduct complaint. 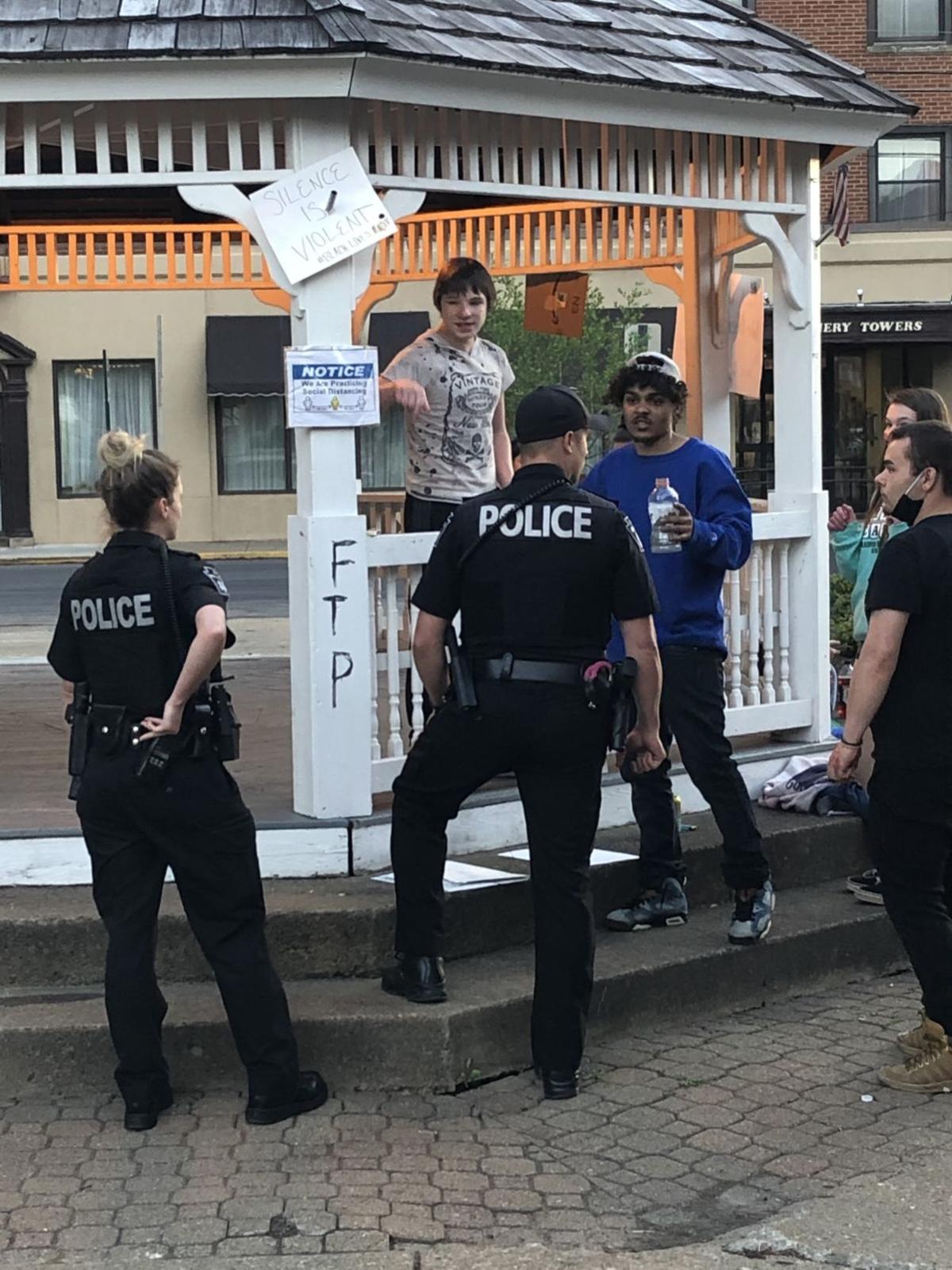 Bradford City Police Officers Shelby Walters and Richard Obermeyer respond to a call of vandalism at the gazebo in Veterans Square Monday evening during the protest.

Protesters along Main Street kneel and raise a fist in the air during a Monday afternoon demonstration against the death of George Floyd and racial injustice. Roughly 40 protesters were present at the event’s peak.

A protester at Monday afternoon’s demonstration carries a sign that reads “He was not resisting #FireChiefBartlett” in reference to Bradford Police Chief Hiel “Butch” Bartlett, who was placed on administrative leave in mid-May due to a misconduct complaint.

Bradford City Police Officers Shelby Walters and Richard Obermeyer respond to a call of vandalism at the gazebo in Veterans Square Monday evening during the protest.

A protest that grew to as large as about 40 people on Main Street and in Veterans Square in Bradford remained peaceful throughout the afternoon and evening on Monday.

The demonstration, which was organized to rally against racial injustice, excessive force by police and the recent death of George Floyd, a 46-year-old black man who died while in custody of the Minneapolis Police Department, began at 2 o’clock Monday afternoon and gradually built up to about 40 people by around 3:30 before slowly decreasing throughout the rest of the evening.

There were also a number of onlookers throughout the event, during which several downtown businesses closed.

Trevor Givan, a 21-year-old Bradford resident who originally organized the protest on Facebook, told The Era, “I honestly want this protest to reach out to America and the people around us in our community (to say) that there is an injustice, there is inequality and there is segregation — not toward a race itself, but toward the fact that people that don’t have enough money or people that can’t live their lives the right way because the justice system restricts us.”

He added that the justice system is forcing those people “between a rock and a hard place.”

The demonstration was organized one week after the death of Floyd. Video from Floyd’s arrest shows three Minneapolis police officers pinning him to the ground while another stood and watched. One of the officers, identified now as Derek Chauvin, pinned Floyd to the ground by pressing his knee on Floyd’s neck.

This lasted for nearly nine minutes, even as Floyd cried out for help and said he couldn’t breathe and as onlookers yelled for help, as well. Floyd subsequently became unresponsive, and even after Floyd lost consciousness, Chauvin was shown continuing to press onto Floyd’s neck.

Chauvin and the other three officers — Thomas Lane, J. Alexander Kueng and Tou Thao — were fired in the days following Floyd’s death, and Chauvin has since been charged with third-degree murder and second-degree manslaughter. Lane, Kueng and Thao remained under investigation as of Monday evening, according to reports from various national outlets.

In response, demonstrators at Monday’s event in Bradford chanted slogans such as “I can’t breathe” and “Say his name: George Floyd” and “How many minutes? Nine minutes” while marching along Main Street between Mechanic and Congress streets.

A large number of the protesters carried signs, many of which said “Black lives matter” and “No justice, no peace.”

A small number of signs included “#FireChiefBartlett” in reference to Bradford Police Chief Hiel “Butch” Bartlett, who was recently placed on administrative leave alongside Patrolman Matthew Gustin pending an investigation into a misconduct complaint regarding the pair’s arrest of Matthew Confer on May 12.

Mask wearing mandated for anyone outside of home

Cameron County’s Weekend in the Wilds is on

The rally also included a number of demonstrations, such as protesters lying flat on the ground to mimic an arrest or by taking a knee and placing one fist in the air.

Members of the Open Arms Church arrived to the protest at about 5:50 p.m. and prayed for both the demonstrators and the officers on scene.

By 6:30 p.m., demonstrators agreed to move off of Main Street and entirely to within Veterans Square and the nearby vicinity upon request from the City of Bradford Police Department. The number of protesters dwindled as the evening wore on.

Assistant Chief of Police Mike Ward, who is currently the acting chief, told The Era during the protest, “(There’s been) nothing violent; it’s been peaceful the entire time. (Police) have just been here providing a safe environment for everybody participating.”

“We respect that right to demonstrate, so we did reach out to some neighboring agencies… and they all were gracious enough to donate manpower,” Ward said during the protest. “So there are several officers here, but we don’t have them all right here on scene. We have some that are further back.

“We’re just here to provide a safe environment for those who are demonstrating as well as the outsiders and passersby. So far, there hasn’t been one instance of violence, and it’s been good on all sides involved. We’re happy and hope to keep it that way.”

As of 8 p.m., no arrests had been made in connection with the event.

However, police responded to a complaint around 8:30 that the gazebo in Veterans Square had been vandalized. On one of the gazebo pillars, “FTP” — an anti-police acronym — was painted or drawn on.

When officers arrived on scene, a protester began cleaning the marks from the gazebo’s pillar.

Ward indicated that no arrest was made or citation given in conjunction with the graffiti, but that the matter remains under investigation.

“We’re reviewing some surveillance footage to see if we can determine who the actor was on that,” he noted, adding that the day was otherwise successful and peaceful.

Except for a few afternoon clouds, mainly sunny. A stray shower or thunderstorm is possible. High 86F. Winds NW at 10 to 15 mph.