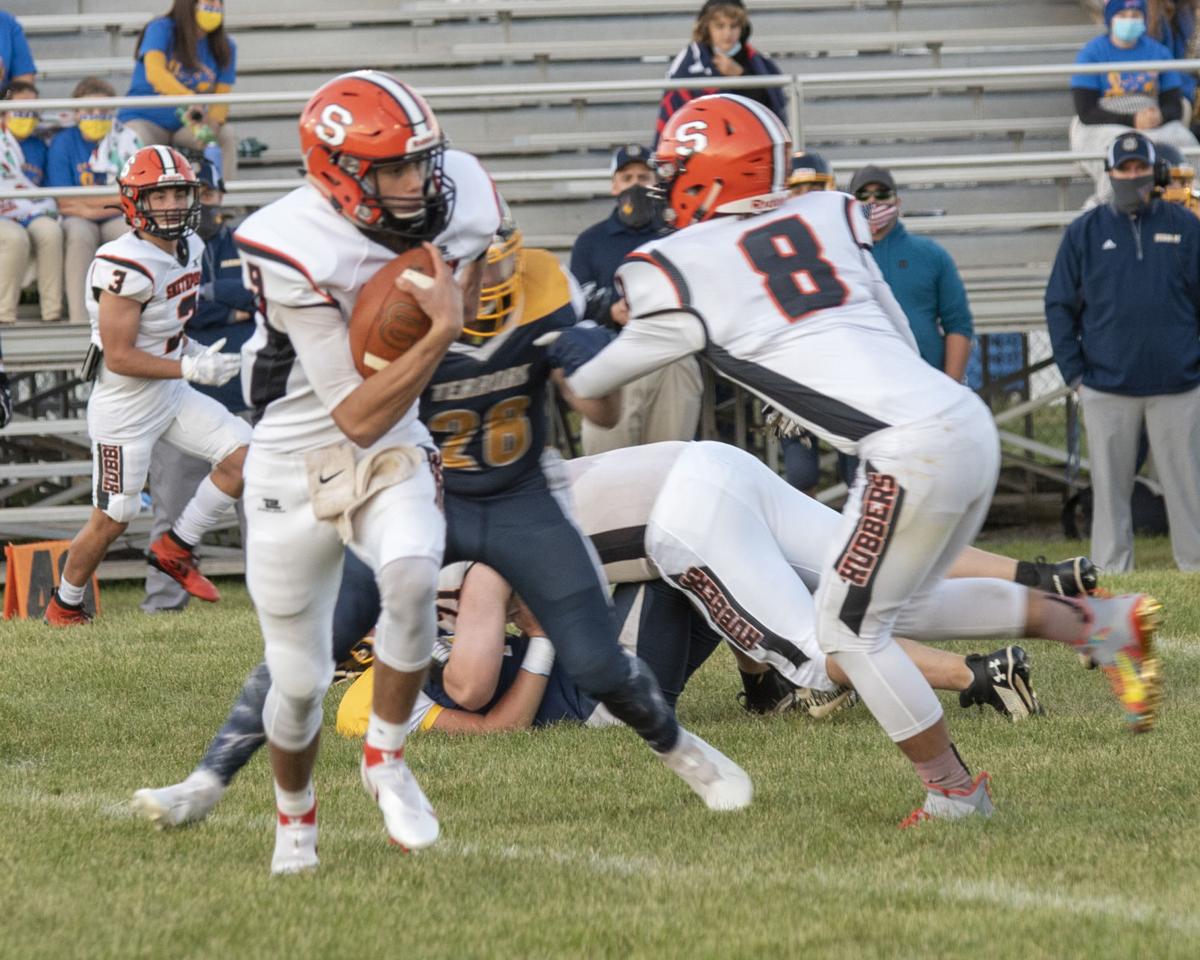 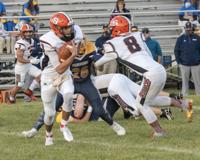 Smethport quarterback Noah Lent looks to break a run during a District 9 IU Small School matchup on Friday night in Duke Center, Pa. Lent totaled 269 yards of offense in guiding the Hubbers to a 60-6 triumph. 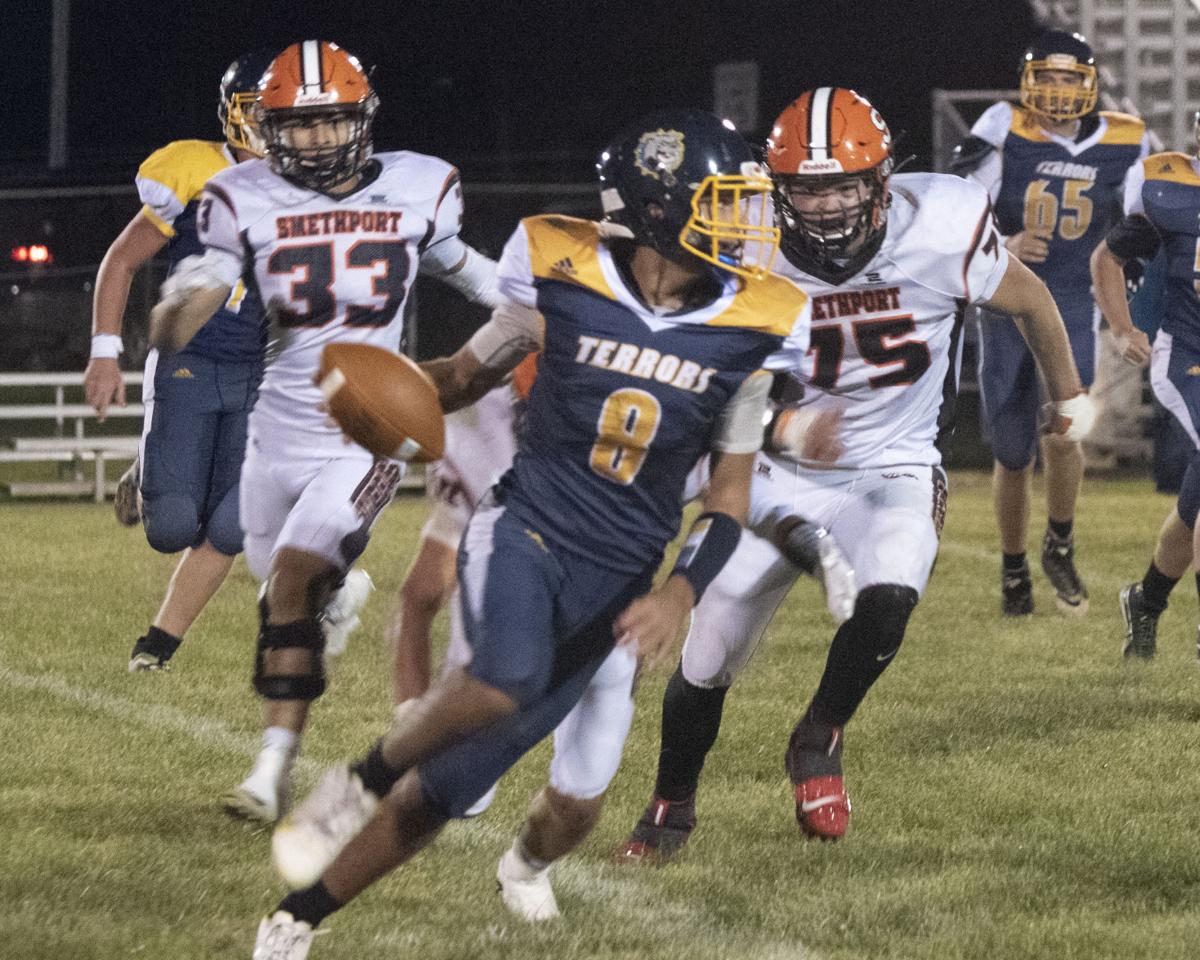 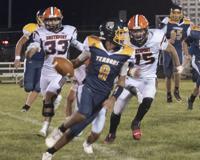 Otto-Eldred quarterback Cole Sebastian scrambles from a group of Smethport defenders during the Terrors’ 60-6 loss to the Hubbers. Sebastian threw for 101 yards and a touchdown.

Smethport quarterback Noah Lent looks to break a run during a District 9 IU Small School matchup on Friday night in Duke Center, Pa. Lent totaled 269 yards of offense in guiding the Hubbers to a 60-6 triumph.

Otto-Eldred quarterback Cole Sebastian scrambles from a group of Smethport defenders during the Terrors’ 60-6 loss to the Hubbers. Sebastian threw for 101 yards and a touchdown.

DUKE CENTER — The Smethport football team is off and running.

Led by dual-threat quarterback Noah Lent and speedy tailback Braedon Johnson, the Hubbers ran away with a 32-0 first quarter and never looked back in a season-opening victory at Otto-Eldred on Friday. The Hubbers took the final score 60-6 as Lent ran for three touchdowns and threw for three more.

“We've got a senior-heavy team, so I expected them to play well,” Smethport coach Adam Jack said. “But certainly they exceeded my expectations tonight. They played really well on both sides of the ball. To come out of the gate like that, put up 32 points in the first quarter, you can't ask for more than that.”

Lent completed 7-of-13 passes for 196 yard and ran 12 times for 73 yards. Johnson ran for 170 yards on just 13 carries (13.1 per carry) and scored twice, including a highlight-worth 76-yard fourth-quarter scamper in which he dodged multiple defenders in the secondary en route to the endzone. Johnson, Brandon Higley and Richie McDowell had touchdown receptions, the longest being McDowell’s 57-yard score.

Ryan Mason scored the final touchdown for the Hubbers, a 35-yard run.

“Coach (Joel) Lent and coach (Ryan) Yingling put together a heck of an offensive game plan for tonight,” Jack noted.

Aiden Mckean pulled down an interception in the final minute for Smethport, denying the Terror’s final chance at scoring. Mason had a team-high five solo tackles and Lucas Fowler and Trevor Zuver both had a sack.

After a scoreless second quarter, Smethport outscored O-E 28-6 in the second half, with two touchdowns in each of the final two quarters.

“I think we got a little bit gassed there in the second quarter and we needed that halftime there to regroup,” Jack said. “I told them at halftime, I said, 'good teams finish games.' And they came out in the second half and they certainly did that.”

“We had a bunch of young guys, not just grade-wise, but a lot of young guys that were inexperienced football-wise,” O-E coach Troy Cook said. “We did some recruiting in the offseason to boost our numbers a little bit, which helped, but those guys didn't have the luxury of a long summer program because of COVID, things like that, and no scrimmage. Not making excuses by any means, because everybody is in the same boat. We just have to give it to Smethport, too, they came out, they played well right off the bat.”

Professional Office in Bradford and Kane area looking for Front