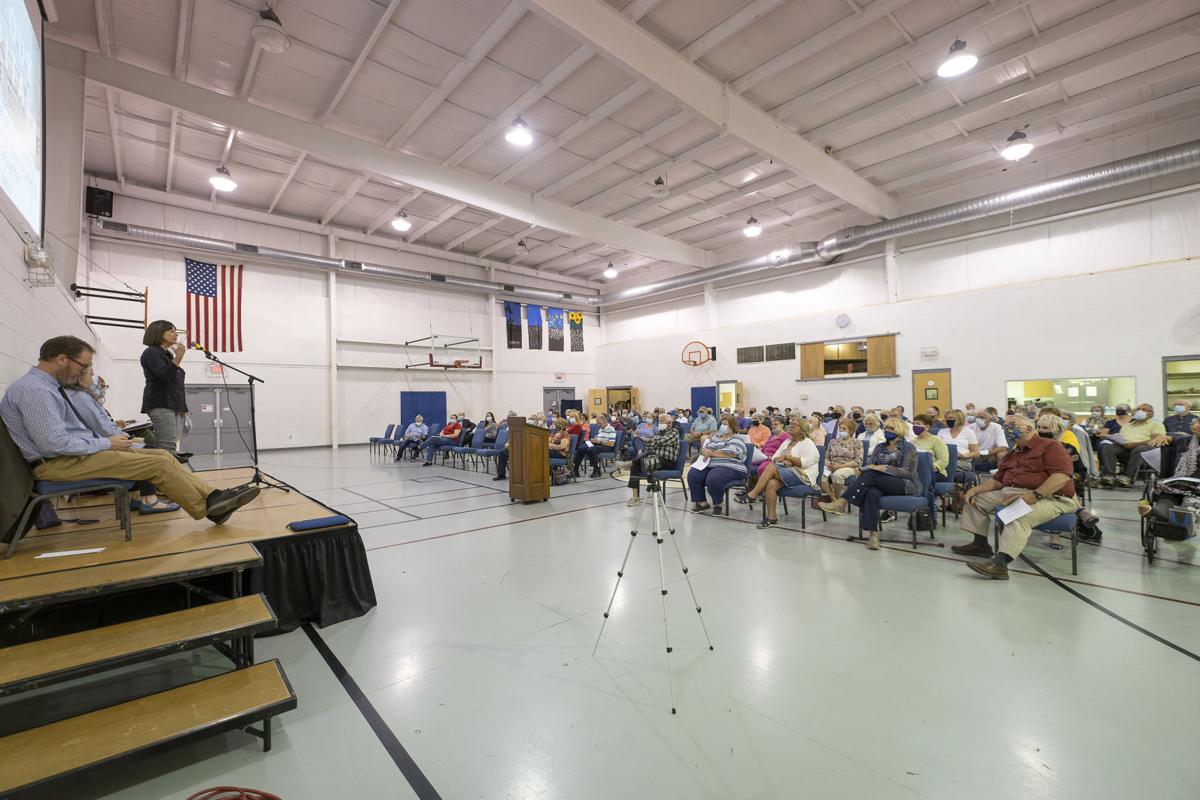 Marty Wilder talks to the crowd about the formation of the “Save Bradford Hospital” committee Monday during the well-attended town hall. 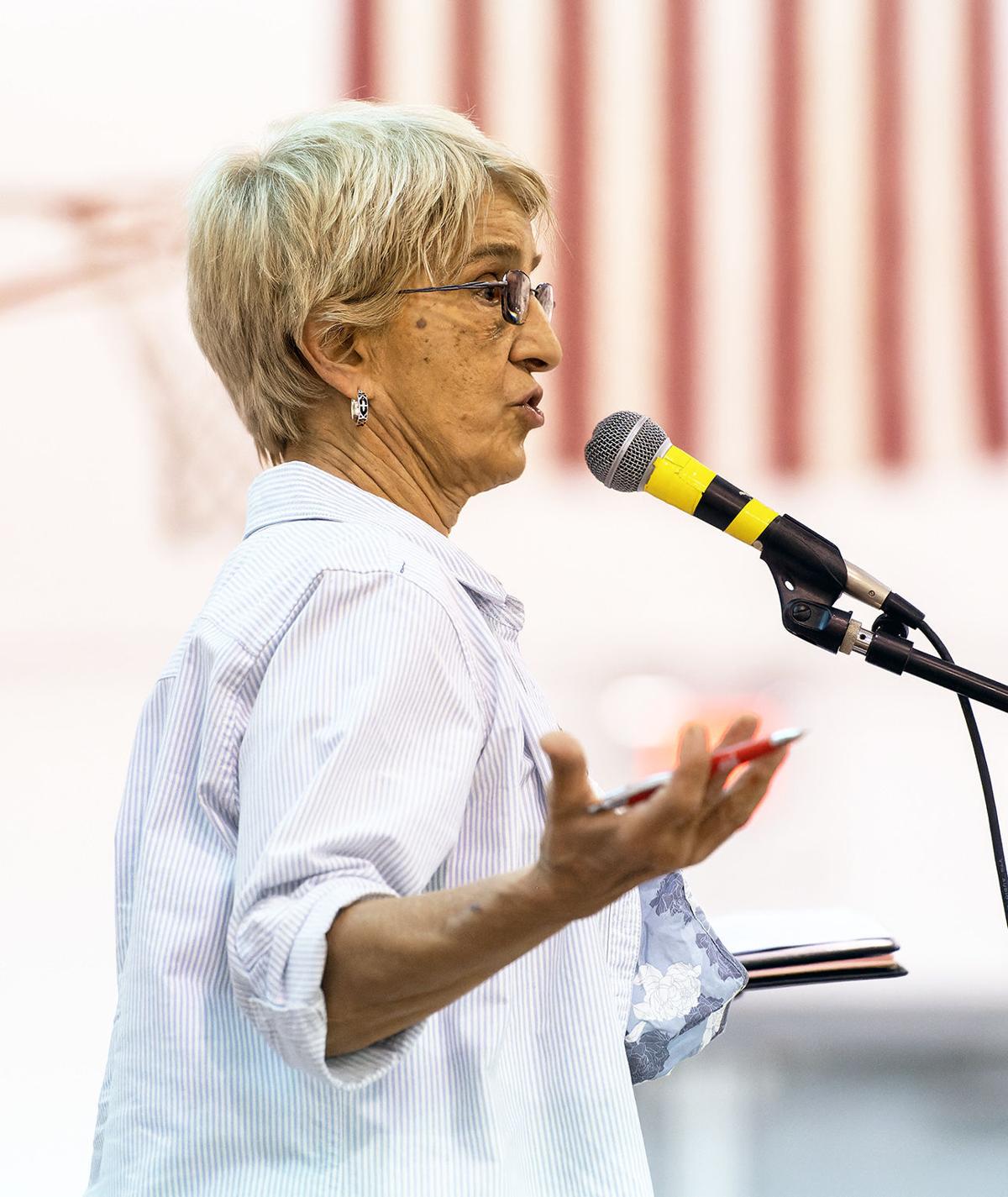 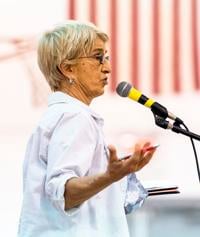 Harriet Nevil, a registered nurse at Olean General Hospital for 52 years speaks to the crowd about some of the group's findings, during Monday’s town hall.

Marty Wilder talks to the crowd about the formation of the “Save Bradford Hospital” committee Monday during the well-attended town hall.

Harriet Nevil, a registered nurse at Olean General Hospital for 52 years speaks to the crowd about some of the group's findings, during Monday’s town hall.

BRADFORD, Pa. — The Save Bradford Hospital committee brought together about 100 people at Grace Lutheran Church Monday night to discuss potential solutions to concerns regarding the availability of healthcare in the community.

Committee members Marty Wilder, Harriet Nevil, Betsy Costello and Patricia Huff Stromberg discussed the research and information-gathering that led them to the town hall, where some residents spoke passionately about wanting to preserve the viability of Bradford Regional Medical Center.

Committee members discussed potential options they have considered for the area’s future, including a consortium to oversee the availability of healthcare in the area and research situations in other communities and how they moved forward on ensuring they have hospital services.

Monday’s town hall was the result of frustration in the community over Upper Allegheny Health System’s announcement in the spring that surgeries would no longer be performed at Bradford Regional — all would be performed at Olean General Hospital — and BRMC would only maintain 10 hospital patient beds. Upper Allegheny officials have said the consolidation of services in Olean makes the two-campus system more viable for both hospital sites.

Bradford has retained its laboratory and X-ray departments, psychiatric center, cardiac rehabilitation, physical therapy, emergency department and the Pavilion for rehabilitation and long-term care and plans are in the works to create “centers of excellence” at both Bradford and Olean hospitals.

But many Bradford residents have been concerned that the reduction of full services at BRMC could spell the beginning of its end.

Wilder also admitted she was surprised by what she saw as a lack of reaction to Upper Allegheny’s decisions from Bradford’s business and community leaders. She, like her fellow committee members, decided they needed to take some kind of action to at least explore if the community would have any options.

Audience members shared concerns as well as personal experiences that ranged from dealing with broken bones and no room to be admitted to Bradford Regional, a lack of blood for transfusions and issues with transport to Olean General Hospital.

“I think events like tonight are the best way to fight back; an organized, professional voicing of concerns, issues and getting the word out,” Bradford resident Jessica Cramer said.

Many spoke of their love for the community and intention to stay here, while others noted the reduction in hospital services is giving them pause and introducing consideration of a move to an area with a hospital with more services nearby.

Doris Young, who noted she has lived in the Bradford community most of her life, said, “I love Bradford, I intend to stay here until I’m 6-foot under.”

Young asked about the possibility of undoing what’s been done, noting, “When you are with a boyfriend and it doesn’t work, you break up. Why can’t we break apart (from Upper Allegheny)? Is there a legal reason? We need to find that out.”

Rocco Camus advocated for the involvement of the state attorney general, who could investigate and help find the answers the community seeks — particularly in regard to what he said are questions about what has happened to money from local donors and the state of Pennsylvania given to the Bradford hospital. This suggestion was met with support from other audience members.

Numerous retired or current nurses dotted the crowd, sharing their love for the community and the information they have had access to, including conversations with out-of-area hospital officials on interest in taking over the Bradford hospital and the fact Bradford is involved in a rural health initiative with funding.

One repeated element of discussion was in regard to the actual ownership of BRMC and UAHS. Jim Eckstrom, editor of the Olean Times Herald and The Bradford Era newspapers, who was acting as the event’s moderator, explained that Kaleida Health is an affiliate of UAHS, but not the owner. UAHS is the owner and operator of BRMC and Olean General, which are currently considered one entity by Upper Allegheny.

Throughout the course of the town hall, the number of watchers for the live stream fluctuated, at one point reaching 183, in addition to the group who attended in person.

All in all, Costello said she was more than pleased with the turnout and the apparent willingness of community members to explore further options regarding the hospital.

“It was beyond my wildest dreams,” she said of the town hall.