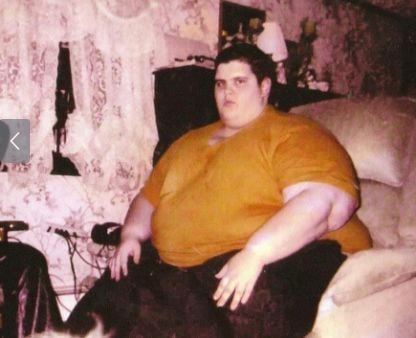 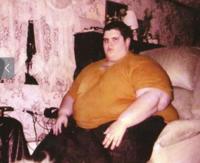 Justin Willoughby, who weighed 799 pounds at the age of 16, shown here, has lost over 600 pounds since that time and has helped others with their weight loss. 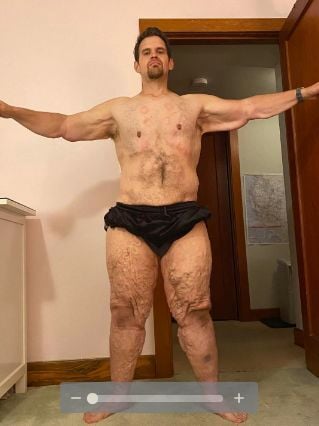 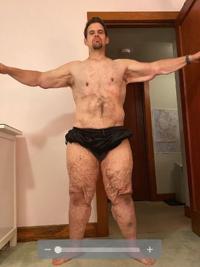 Justin Willoughby is appealing to the community for help in funding an operation to remove excess skin, which is the result of his former obesity,

Justin Willoughby, who weighed 799 pounds at the age of 16, shown here, has lost over 600 pounds since that time and has helped others with their weight loss.

Justin Willoughby is appealing to the community for help in funding an operation to remove excess skin, which is the result of his former obesity,

For the past 18 years, Justin Willoughby has been on an “18-year journey” that included ridding himself of 600 pounds of weight, as well as the last remaining aspect of his former body — excess skin.

Willoughby, a resident of Bradford, provided a brief overview of his life since 1999, when he reduced his weight from 799 pounds to under 200 pounds through exercise and a healthy diet.

Willoughby, 34, first hit the community radar when he was just 16 and struggling with his health and life due to morbid obesity. He said his weight issues at the time stemmed from a food addiction and severe anxiety.

In the years since then, Willoughby not only appeared on television shows and in the print media, but also coached others on losing weight, wrote inspirational books and gave speeches. He currently works for the Evergreen Elm residential agency as well as part-time at the Williams Agency, where he met his fiance, Kristen Pecen. Willoughby said his parents, Ronald and Diane Willoughby, and his brother, Chad, continue to reside in Bradford.

Willoughby said he has provided inspirational talks in recent years, but the pandemic “kind of put a damper” on the appearances in the past year.

“There are still ways to impact people … and social media is the way to get your message out there,” he remarked. “I haven’t done any public speaking over the past year really except for a couple of church appearances in front of small congregations.”

Willoughby said he had two skin reduction operations several years ago, but wasn’t able to have the procedure completed on his arms and legs due to the out-of-pocket expense. He said the next operation he hopes to undergo is scheduled for May 20 in Pittsburgh.

Watch Liz Cheney speak ahead of vote to oust her

“The deal is we scheduled it, but we need the money by May 10” for it to take place, he said, noting his medical insurance won’t cover the cost. The total cost of the two-phase operation is $50,000 to complete all areas with excess skin. He said $13,000 is needed for the first operation on May 20 which will remove excess skin from his legs.

“I’m getting remarried in August (to Pecen)” and hope to have the procedure completed by then, he added.

Willoughby said Pecen convinced him to pursue the upcoming operation, if possible.

“She said, ‘Justin, you’ve worked so hard, you’ve done so much and you’re trying to take care of your body, so why don’t you want to continue your journey,’” he shared. “I had put it (additional operation) on the back burner. I knew it was possible, but I hadn’t thought about it too much … but it’s catching up to me in my legs and my body.”

Willoughby said the procedure will not only help him pursue his hope for a healthier lifestyle, but also will give him a different outlook.

“I’m at this place where I’m going to try for the first (operation) because it’s really, really important to me so I can be more confident and I can help more people,” he explained. “I can also show people the goodness of God and his provision — and his continuation of the story.”