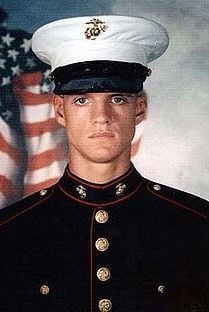 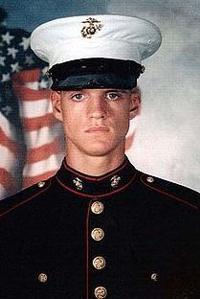 The late Cpl. Jason Dunham will be honored during the NASCAR Coca-Cola 600 race Memorial Day weekend. 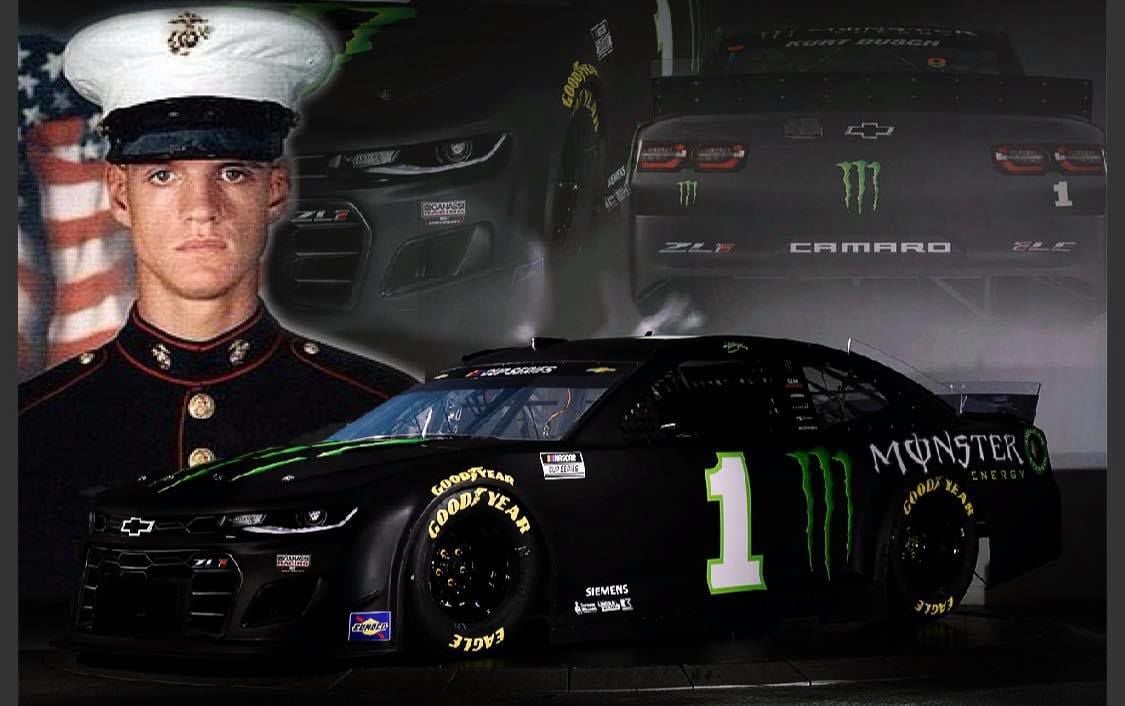 This image, courtesy Robert W. Howden Belfast American Legion Post 1504, shows Kurt Busch’s car and a photo of Cpl. Jason Dunham. The legion “will be televising the Coca-Cola 600 May 30, at which time members and their guests can come see Jason Dunham‘s name on Kurt Busch’s windshield,” a spokesperson told The Era.

The late Cpl. Jason Dunham will be honored during the NASCAR Coca-Cola 600 race Memorial Day weekend.

This image, courtesy Robert W. Howden Belfast American Legion Post 1504, shows Kurt Busch’s car and a photo of Cpl. Jason Dunham. The legion “will be televising the Coca-Cola 600 May 30, at which time members and their guests can come see Jason Dunham‘s name on Kurt Busch’s windshield,” a spokesperson told The Era.

SCIO, N.Y. — As a kid, Jason Dunham would accompany his dad, Dan, to dirt car races at tracks in the area to help with repairs and other issues with his dad’s car.

Now, decades later, the late Cpl. Jason Dunham, who was a posthumous Congressional Medal of Honor recipient, will be honored with his name displayed on the windshield of Kurt Busch’s race car during the NASCAR Coca-Cola 600.

The annual Memorial Day Weekend race will be held May 30 at the Charlotte Motor Speedway in North Carolina. In addition to Dunham, several other fallen military heroes will be honored with their names on race cars.

Dunham, a native of Scio, N.Y., was fatally injured in 2004 while serving with 3rd Battalion 7th Marines during the Iraq War. When his unit was attacked, Dunham, 22, deliberately covered an enemy grenade with his helmet to save at least two nearby Marines. When it exploded, Dunham was gravely injured and died eight days later. In addition to the Medal of Honor, the United States Navy also commissioned a ship to carry the name, the USS Jason Dunham.

One of his local honors occurred in 2010 when the L.E.E.K. Hunting and Mountain Preserve for wounded warriors in Oswayo, Pa., renamed the “warrior hut” on the grounds as the Cpl. Jason L. Dunham Warrior Barracks.

“They contacted us a couple of weeks ago and said they’re going to do a pretty big thing,” Dunham said of Chip Ganassi Racing. “We back away from these types of things, but I said, ‘You know what, it’s been 17 years (since Jason’s death) and this is a good thing to keep Jason’s name alive — you’d be surprised how easily people forget.”

He added, “Every car will have a fallen soldier on it, but I think Jason may be the only Medal recipient.”

Dunham said the Busch car will be taken to the dock near the ship named for his son for photo sessions. He said he and his wife will never forget their fallen son who died 17 years ago and would have been 40 years old in November.

Toddler on a feeding tube after swallowing magnetic balls

“It seems like yesterday, when you lose a child, it (doesn’t) matter how” it doesn’t get better … I think about it everyday,” Dunham said. “We just get up everyday and you know it’s a different day. There’s things you miss, like him getting married and having kids.”

He said the three grandchildren they have, and their other children, Justin, Kyle and Katie, have helped with the healing. One grandson, Jason Daniel Dunham, was named for his late uncle.

Dunham said a documentary on his son, that is being produced by a friend of the family and titled “The Gift,” will be available for viewing in about a year.

“It’s about the struggles the (veterans) are going through now, today,” he explained. “We’re thinking about having a reunion with all of (Jason’s unit) in the fall. We haven’t seen some of these guys since it happened … but they’re all our family now.”

As for race cars and the event, Dunham noted that he is a big fan, and so was Jason for years.

“I think Jason would think this is pretty awesome because I raced (with dirt racing) for 20 years,” he added, noting he and Jason went to local tracks. “(Jason) was part of that growing up, he did some work on the cars and stuff.”

During race day, Dunham said he and his wife will watch the event and their son’s honors on television.

“We’ll see more on TV than we would if we were there,” he remarked. “And it’s not about us, because we don’t do things for personal gain.”