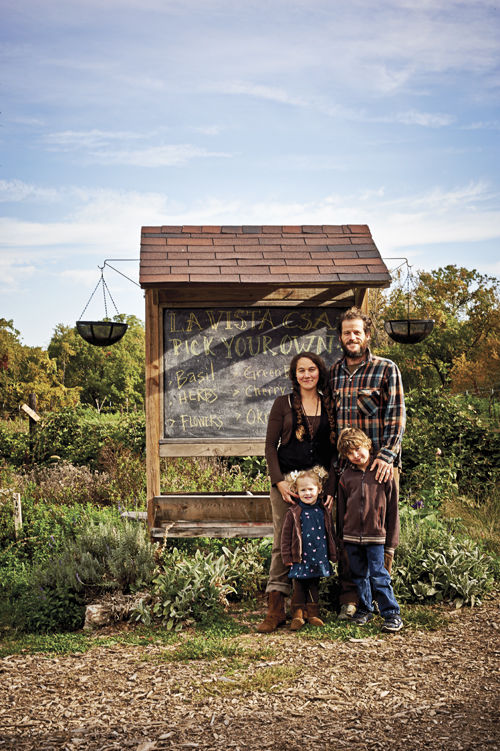 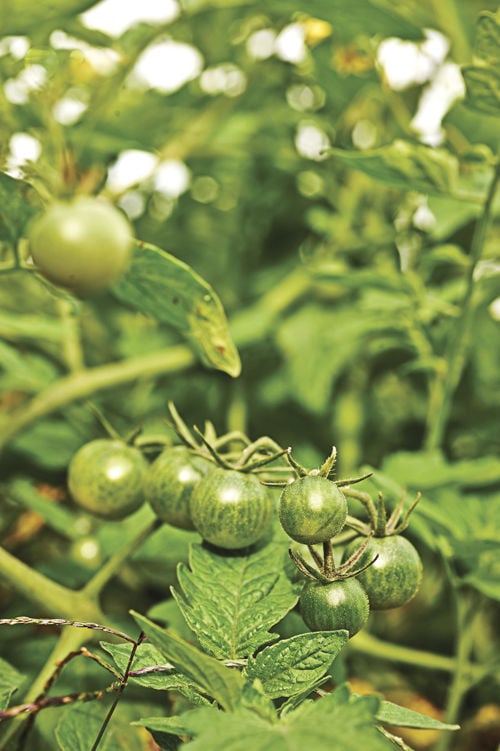 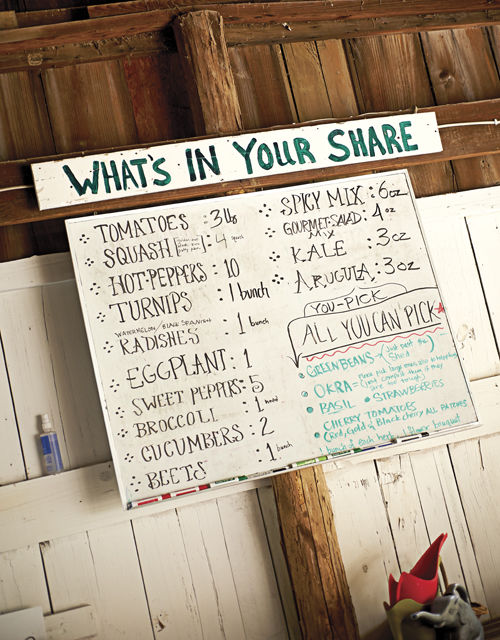 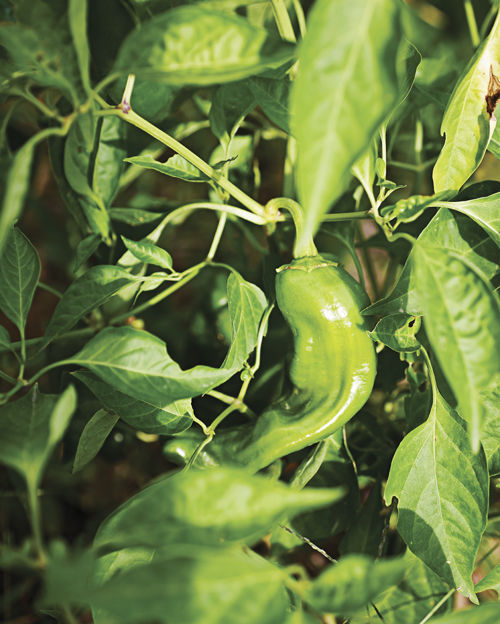 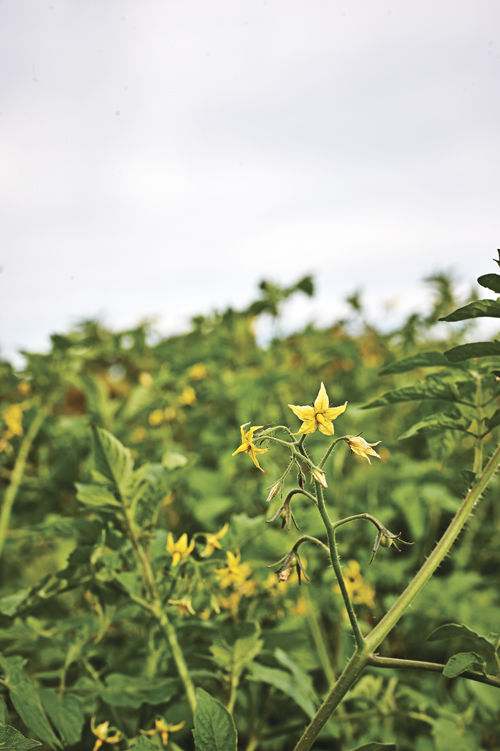 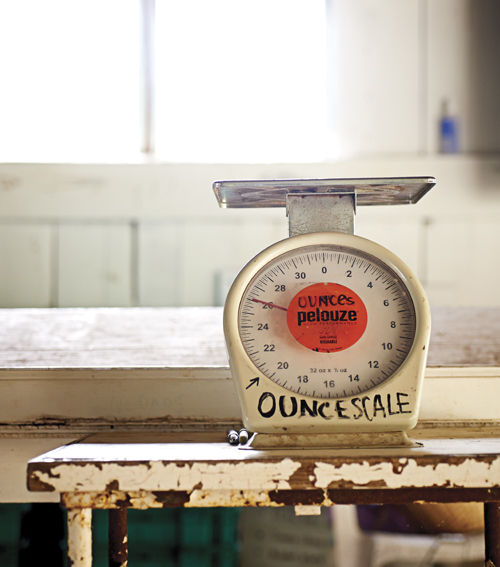 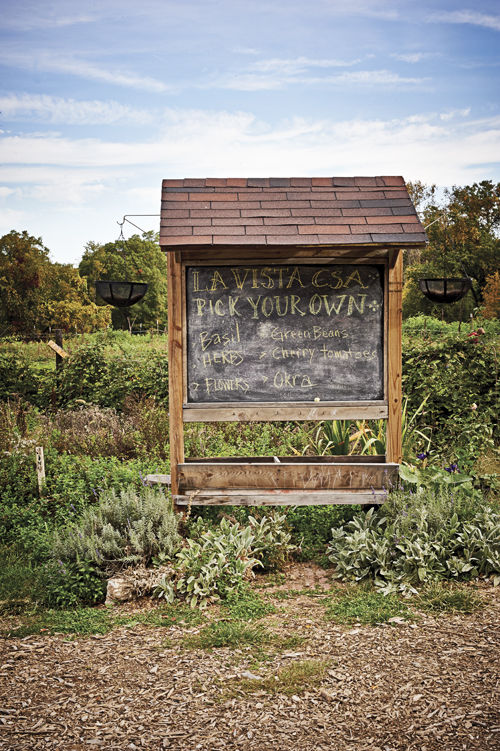 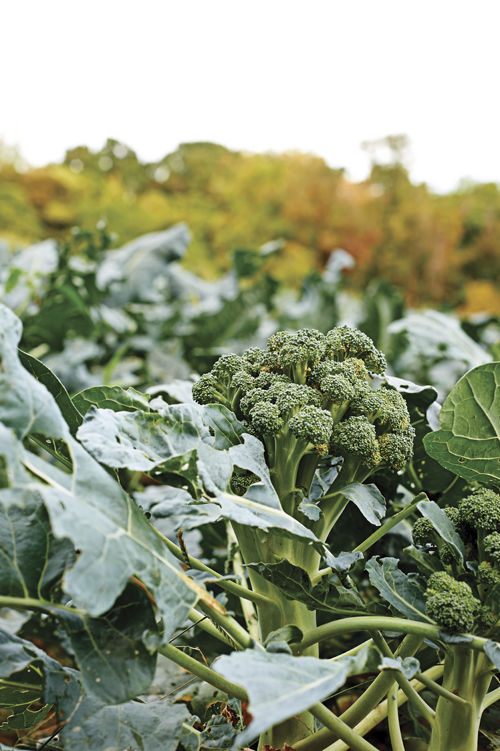 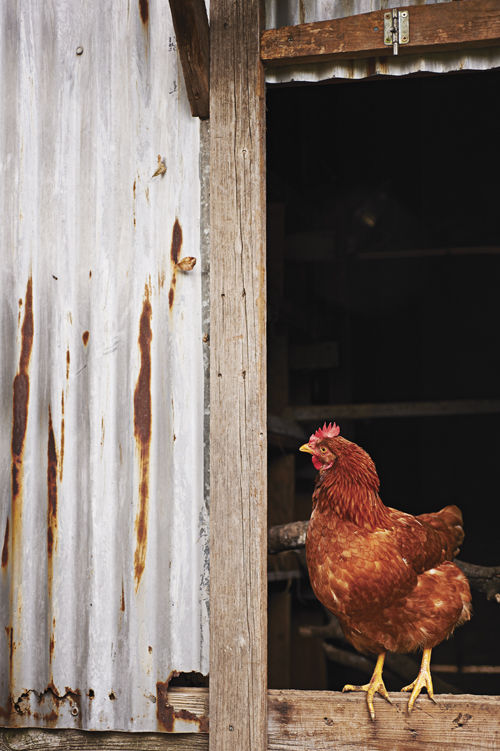 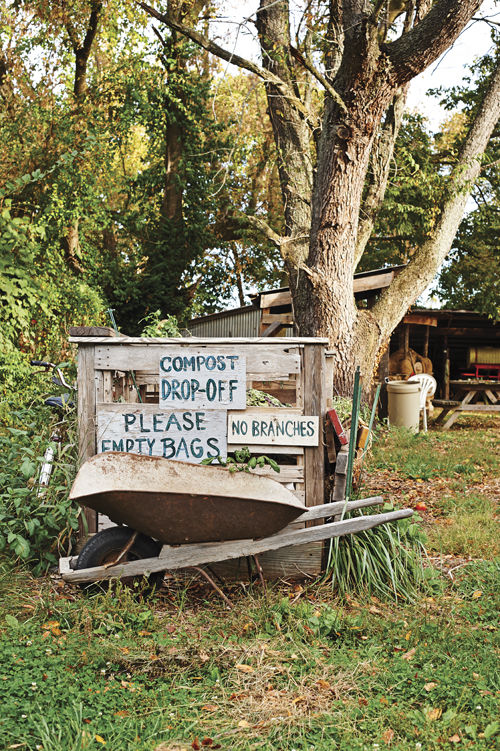 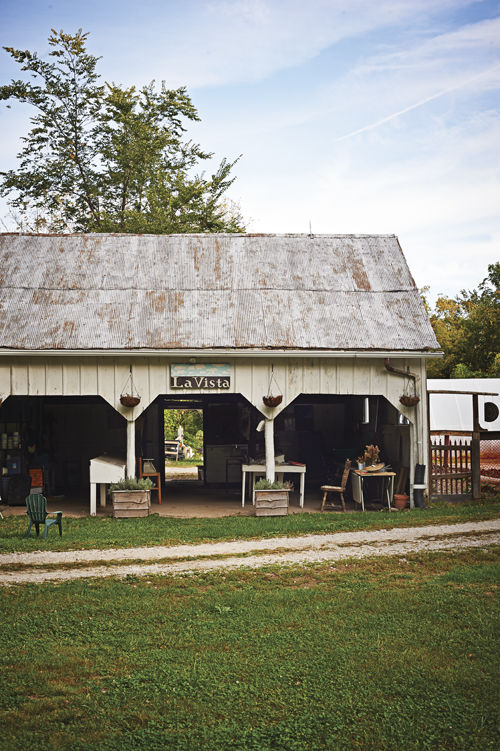 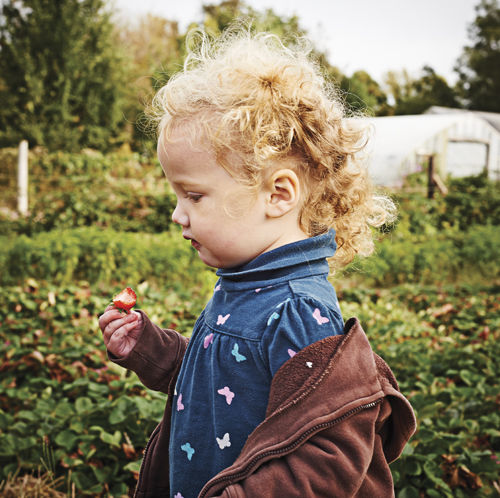 Before semi-trucks and interstate highways, before trade treaties and cargo ships, people ate food that came from much closer to where they lived.

Then—because we could—we got excited to buy bananas from Costa Rica and avocados from California. And while we still love to eat these more exotic treats, a growing number of people prefer produce that was grown near their home.

Driven by a desire for healthier food that leaves less of an impact on the environment, farmers markets and produce subscriptions are spreading like sweet potato vine.

Food that travels thousands of miles to reach its destination has environmental implications, says Jamie Aramini, founder of Sustainable Kentucky, a blog about local food choices.

“There’s a huge, huge carbon footprint from food in the grocery store,” says Aramini, a locavore—someone who eats foods grown locally whenever possible.

There are a bushel of reasons to eat locally, she says, and it’s not just to be part of a trend.

“First, the health reasons. The food is fresher, and it’s often more flavorful because producers can grow varieties (that might not be ideal) for shipping,” she says. “Also, economically—when you buy local food, a lot more money stays in the local economy.”

“Local food restores our sense of community because you get to know the people who grow your food. My greatest friends are the people who grow my food. I think it definitely builds stronger economies and communities, if we refocus our energies to buying as much locally as we can.”

Consumers are learning they don’t have to sacrifice price or convenience to eat a diet abounding with local produce. Many are signing up with CSAs, a system of prepaid subscriptions to a farm’s produce for the season. Vegetables, herbs and fruits are bundled for a subscriber, and then delivered directly to their home or office, or set aside for them to pick up.

“We like to think that through our CSA, we save the local consumer 40% compared to if they were buying in the grocery store,” says Urbie West, a fifth-generation farmer from Pinckney’s Produce, a CSA provided by Rest Park Farm in Beaufort, S.C.

His family’s farm closed down in the 1980s after 100 years of operation, but it was able to reopen as a CSA.

“We used to grow 1,000 acres of vegetables. Now, it’s 45,” he says. “We were the biggest truck farm on the East Coast at one time. With the cost of fuel and labor and getting the crop out, (running as a farm) was no longer viable.”

Farmers also create less waste by operating as a CSA, he says. Because the shares are bought in advance, he can plan what he plants and know it’s destined for a kitchen.

“We know what to grow, and how much to grow,” West says. “We know before the first seed is in the ground that we are growing for 800 families.”

Customers might think they’re taking a bigger gamble, since they’re buying food that doesn’t even exist yet. Bad crops happen, and they don’t know exactly what veggies they’ll get. But West says if they can stay flexible, they ultimately save, too. They will get higher-quality food, and their produce will have taken a much shorter trip to their kitchen.

“It’s not shipped around to different distribution centers,” West says. “It can be on your table within 24 hours of being harvested. All the nutrients are right there, and the produce lasts longer, weeks longer in the refrigerator. In the supermarket, you don’t get the shelf life we provide.”

Clean Up Your Act

In a time when people love checking food labels, local produce fits right in. When you know where your food comes from and who grew it, you can feel better about what you buy.

“Our customers are able to know what we are doing with the product,” West says.

Shoppers can learn about how farmers grow and harvest crops, and even connect with other reliable food sources in the area. And more people are asking questions, says Aramini, who is also the founder of Market on Main, a farmers market in Somerset, Ky.

“We’ve become distrustful of product labeling,” she says. “Unless we see it for ourselves, we can’t necessarily know how it was raised or treated or packaged.”

Pesticides are among the top concerns of locavores, as many large and small farms use chemicals to keep bugs back. But West says CSA farms are less likely to use pesticides, because farmers have less pressure to harvest 100% of the crop. Also, insects are less of an issue at eclectic small setups, compared to larger farms growing only one thing, he says.

Many people would be “appalled” by some of the processes behind mass produced food, says Debby Campbell, vice president of the Missouri Farmers Market Association, and executive director of Get Healthy DeSoto, a nonprofit health organization that runs the DeSoto Farmers Market and two community gardens in DeSoto, Mo.

“People are becoming more aware that there are different ways things are raised and grown,” says Campbell.

“It makes a big difference if you can go to a farm and see how animals are treated, and to a processing plant to see how food is handled and prepared and packaged, rather than (getting food from) some place that’s not as careful as you and I might want in our home.”

“In my opinion, it’s less likely to happen,” Montgomery says. “We operate on a smaller scale, so if there is some sort of bacteria or pathogen that spreads, it’s more traceable than on a large-scale farm. There is less margin of error, fewer workers in the field, and better oversight.”

We care about more than just how the food is handled. When the people picking our food aren’t treated right, that leaves a bad taste in our mouths, too.

“How about the labor that harvested it? Were they fairly paid and treated fairly?” Aramini says. “There are so many things that go into food production, and people want to know what they are putting into their bodies. The best way to do that is to know the producer personally.”

For those who support the Buy Local battle cry ringing out on Main Streets across America, local produce presents a product made and distributed often in the same county where they live. These healthy, hungry shoppers support the farmer and his workers, and they’re probably opening their wallets at other local businesses, too. It works in DeSoto, Mo.

“We like to keep local money local, and a farmers market can do that,” Campbell says.

The farm also invites CSA members to work off the cost of their produce shares—whether they need the savings, want a workout or just have time on their hands.

“We take into consideration the social bottom line in our operations, too,” Montgomery says.

And one of the neat things about CSAs and farmers market is they’re a gathering place for the community, Campbell says. People can socialize and learn from the farmers.

“It’s a place to go and meet your neighbors, and sit down and visit,” she says. “If you go to a grocery store, you don’t have that opportunity. You park as close as you can and dash out.”

Your mind boggles at the potential of all the fresh produce that comes along with your CSA subscription. now, what are you supposed to do with it? About one-quarter of the CSA customers at Pinckney’s Produce drop their subscriptions every year because they don’t know what to do with the vegetables in their share, says owner urbie West. Sometimes people don’t even recognize the veggies in their bag. Don’t let a little thing like lack of knowledge stand in your way. Many CSAs offer tips and ideas through newsletters and recipe cards. Get online, ask some friends and experiment to find recipes that make your vegetables into super sides and even stars of the table. Here are some recipes and ideas to think outside the bushel.

The increase in the number of farmers markets since 1994

Big or Small, Find 'Em All!

CSAs come in all shapes and sizes. Yours might offer full shares and half-shares, pre-set produce or mix-and-match. Learn more and find a CSA near you at LocalHarvest.org.

CSAs and markets: Then and now

The CSA movement has grown dramatically since its birth in the 1980s. Localharvest.org, a website devoted to farmers markets and CSAs, lists more than 4,000 CSAs in its database.

According to the u.S. Department of Agriculture, 12,549 u.S. farms marketed products through CSAs in 2007.

“People are finally waking up to the benefits of eating locally grown food for our environment and health reasons,” says Debby Campbell, vice president of the missouri Farmers market Association.

“I hope it continues to grow, and picks up merit as it grows,” Campbell says. “The interesting thing about a farmers market is, you seldom lose a customer. It only grows because people see the benefit once they come. And when they taste the produce, they are going to come back.”

And more people are going to eat local foods in the future, says Jennifer montgomery, owner and farmer of blackberry meadows farm in natrona heights, Pa.

“I think it’s really the only option the way the economy is going, and the way the oil prices are going up,” she says.

Find Out What's in Season in Your Area

Eat What's in Season, or Defy the Weather

Whether it’s spring greens, tomatoes in high summer or watermelon in fall, we all want to know what’s in season in our region. South Carolina farmer urbie West says growing seasons everywhere tend to start and end with colder-weather crops such as broccoli, cauliflower and leafy greens.

And though winter’s cold freezes our dreams of fresh vegetables, some Kentucky farmers have gotten creative, says Kentucky locavore Jamie Aramini. They’re using high tunnels—structures similar to green houses—to cover hearty crops and extend the growing season. “They plant directly in the ground, and can have lettuces and greens through most of the winter,” Aramini says.