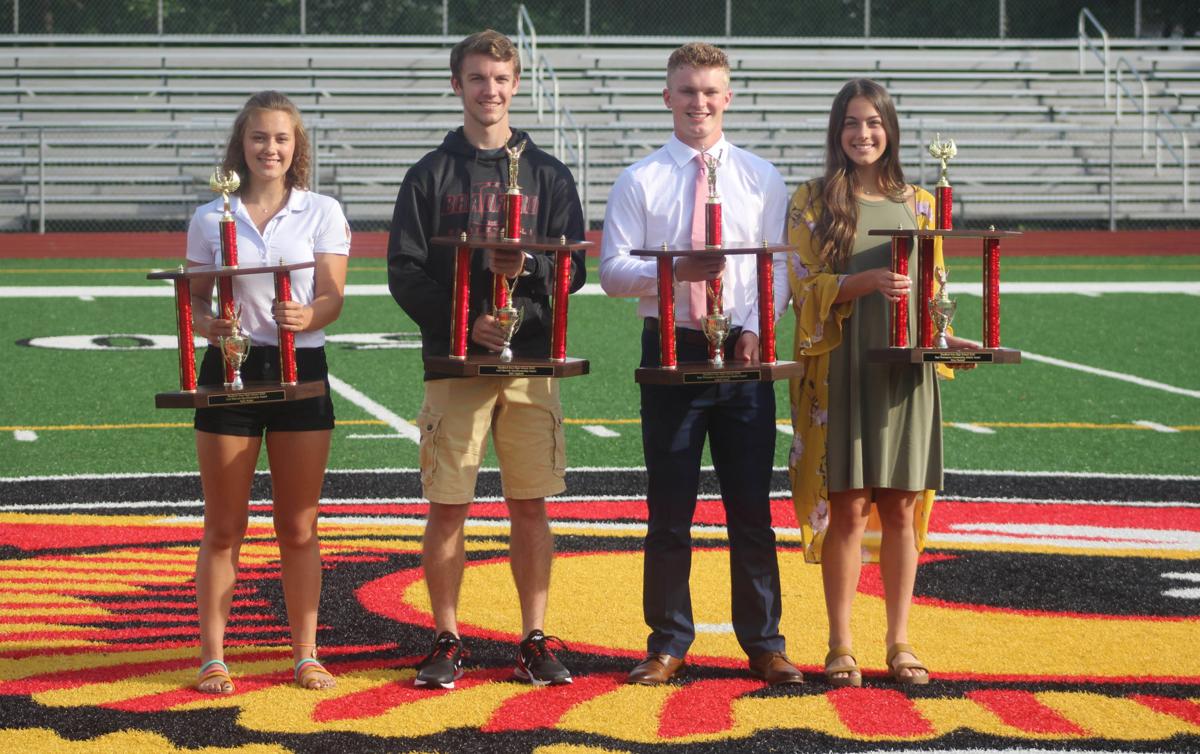 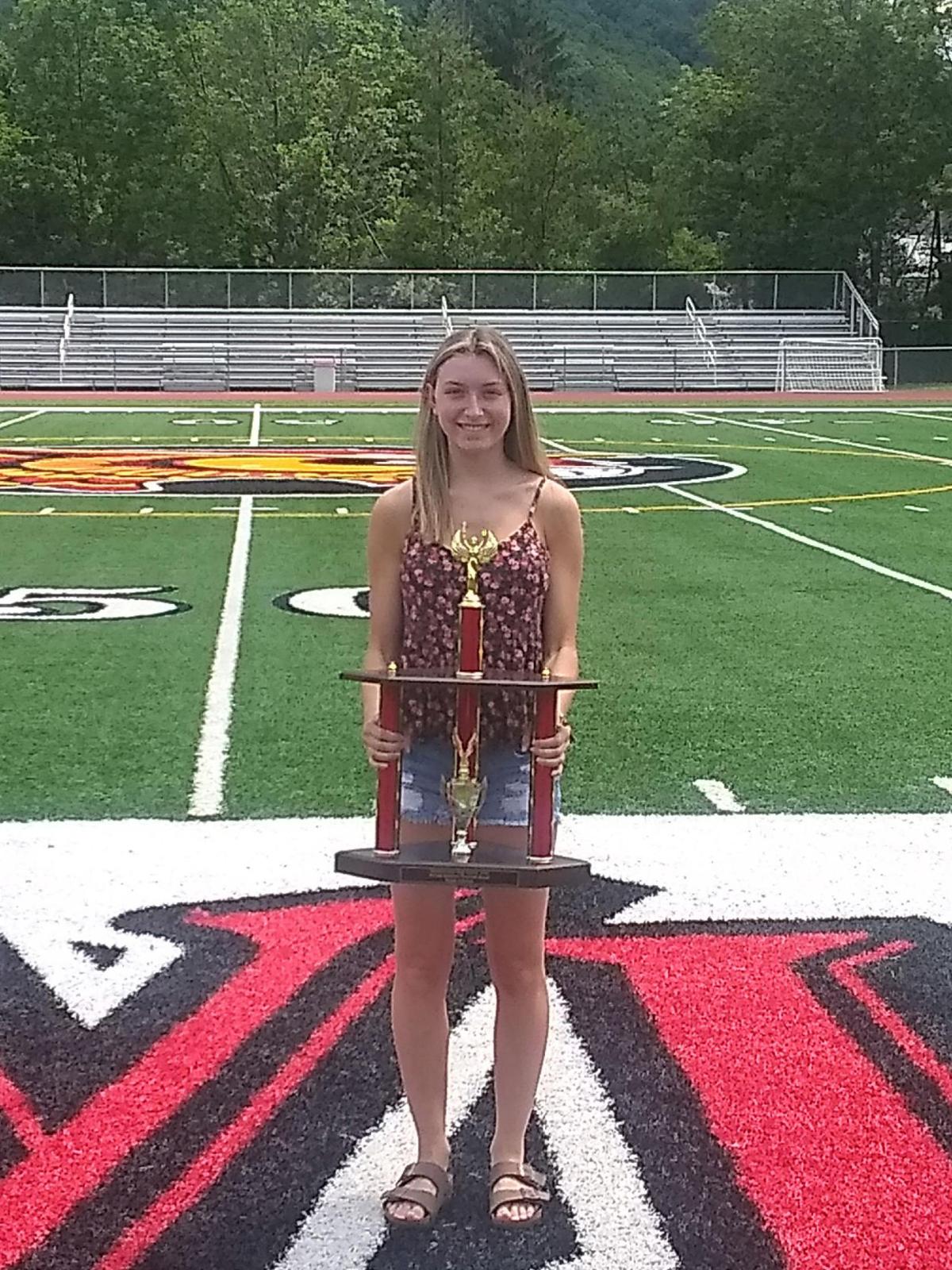 During their four years at Bradford Area High School, Erica Marshall and Caleb Nuzzo combined to play seven different sports, won countless games and events, and helped elevate the Owls’ athletic programs to success at both the district and state levels.

And for that, the pair of talented, multi-sport senior athletes took home the top pieces of hardware at a small ceremony organized by athletic director Mike Erickson on the school’s turf late last week.

Recipients were joined by some of their immediate family members at the awards presentation, typically done as part of the senior recognition night that was canceled for 2020.

The event’s major trophy, the Bud Thompson Award, is given annually to a senior male and female athlete who has participated in two or more sports. Winners are voted upon by coaches and the athletic department.

The female award went to Marshall, who enjoyed a strong season on the volleyball and basketball courts and also ran several cross country meets in 2019.

“She was a huge influence on all of her teams as she led by example on the court and in the school community,” Erickson noted.

Marshall, who is headed to St. Bonaventure University to run track and field next year, missed out on the track and field season but still had a memorable senior campaign at Bradford High.

In volleyball, she helped the Lady Owls to a victory over Punxsutawney in the D9 Class AAAA semifinals before losing to DuBois in the title game.

And in basketball, Marshall led Bradford to a 10-13 record and into the District 9 playoffs — snapping a four-year postseason drought.

“It means a lot (to win the award) because I think back to all of the coaches and my younger teammates that I helped influence because, I mean, even though we had some rocky seasons here and there, I think I really helped out the younger teammates and I still have close

relationships with them and that means the most to me,” Marshall said.

Marshall said that competing at the state and district meets for track stood out during her four years at BAHS, but as for a particular game or moment, one certainly stands out above the rest.

It was the Lady Owls’ season-ending 44-43 victory on the hardwood in 2018 over an undefeated Punxsutawney team, a game that ended when Marshall knocked down two free-throws with no time left on the clock in regulation.

“I think about that game at least three times a week,” Marshall said, laughingly.

Caleb Nuzzo took home the male half of the award, winning it for what Erickson described him as, “A leader in and out of the athletic arenas and has become a role model for younger athletes.”

Nuzzo spent part of the fall as the Owls’ starting quarterback and was also a key member of the team’s defense in the secondary.

On the basketball court, he did a little bit of everything as one of Bradford’s main ball-handlers for a team that went to a third straight District 9 title game.

“(It’s) very humbling to win this award, especially with all of the great athletes that have won this award before me,” Nuzzo said. “It means a lot just with what it exemplifies and the core values behind the award.”

Nuzzo, who would have been Bradford’s starting catcher on the diamond if there was a season in 2020, will attend Slippery Rock and hopes to play baseball there.

Nuzzo said that his favorite sports memory while at BAHS was when his sister, Abbie, kicked the extra point in a game against Karns City in 2019.

Get to know the Wisconsin Badgers' 2020 football recruiting class

“That is number one, for sure,” he said. “By far my favorite moment in any sport.”

“(Awarded to) a senior male and female who exemplify the qualities of good sportsmanship such as respecting officials, staying positive, winning with class but losing graciously — but above all being a great team player,” explained how he distinguished athletes for the award.

Huber was injured in Bradford’s second game of the year in a tournament at Otto-Eldred and did not return for the remainder of 2020.

Still, she was a good teammate and supported the team from the bench for most of the season.

Huber, who will attend Penn State in the fall, coincidentally had her favorite sports memory in State College.

“The hole-in-one I got at Penn State,” Huber said. “That’s definitely one of my favorite (memories) and then just playing with a bunch of good teammates and all of my friends getting together and practicing, whether it’s in the backyard or here.”

Tyler Gigliotti, who ends his Bradford High career as the school’s all-time leading scorer on the basketball court, was the male recipient of the award.

Gigliotti broke the school record with a 35-point performance against DuBois in early February and has been a Big 30 First Team All-Star in each of the past two seasons.

“It’s great to be recognized as a sportsmanship athlete and that is something to be proud of. It just shows that with respect you can still have success,” Gigliotti said.

Gigliotti was also a Big 30 All-Star on the baseball field and plans to attend Penn State Behrend in the fall.

“I am going to look back on my four years here — regardless of what sport it was — and have a countless number of great memories,” he said. “We had a great time.”

Regan Johnson received the other major athletic trophy, earning the Brenda Ambrose Memorial Award for her “character and dedication to her sports.”

Johnson was a four-year star on the Lady Owls’ soccer team, where she broke the school’s all-time scoring record this past fall.

She helped Bradford to back-to-back District 9 titles and state playoff appearances and was chosen as the Big 30 Girls Soccer Player of The Year last fall.

Johnson was also the Lady Owls’ top sprinter during the indoor track and field season and was gearing up to defend her title as D9’s Most Valuable Track and Field Athlete in the outdoor campaign before it was canceled.

“I am deeply humbled to receive this scholarship,” Johnson said. “I understand Brenda was a young woman with tremendous athletic ability and an exceptional scholar student… I want to thank the Ambrose Family for sponsoring a special scholarship in memory of their loved one.”

Johnson, who ends her career with the school records in the 100-meter outdoor, 60-meter indoor and 4x200 relay indoor, will run track and field at Slippery Rock University in the fall.

“I have some great memories of our overnight trips for track with my teammates and friends,” she said. “I recognize my accomplishments were a result of a lot of hard work and commitment not only from myself, but my teammates, coaches, competitors and family.”

Sunshine to start, then a few afternoon clouds. A stray afternoon thunderstorm is possible. High 88F. Winds light and variable.

Sunny along with a few clouds. A stray shower or thunderstorm is possible. High near 90F. Winds light and variable.