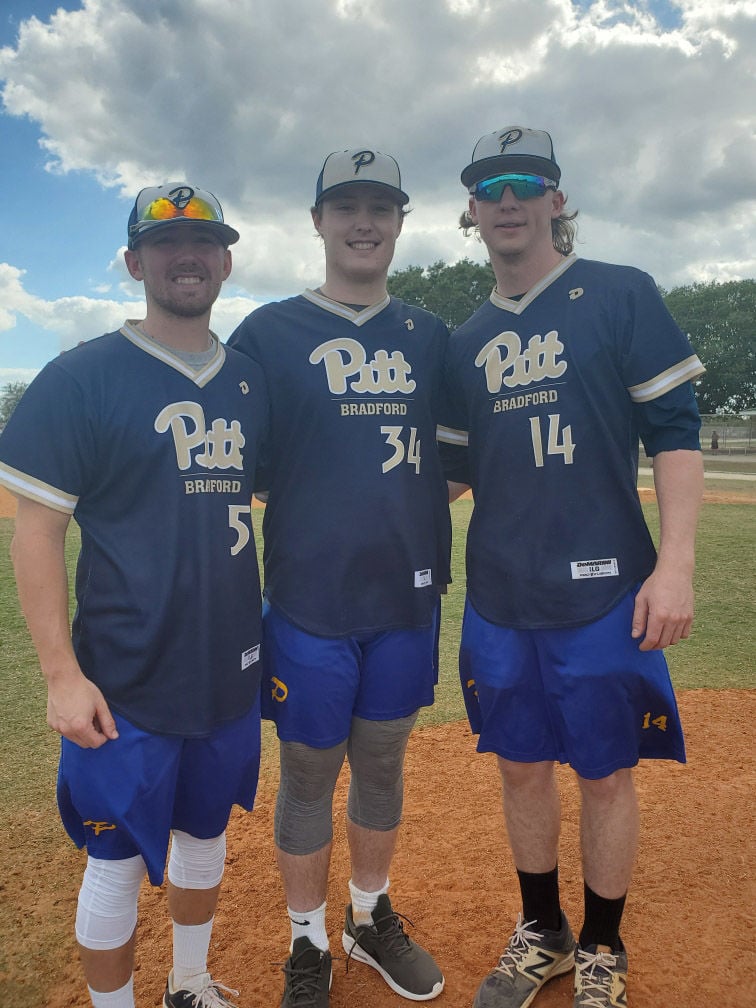 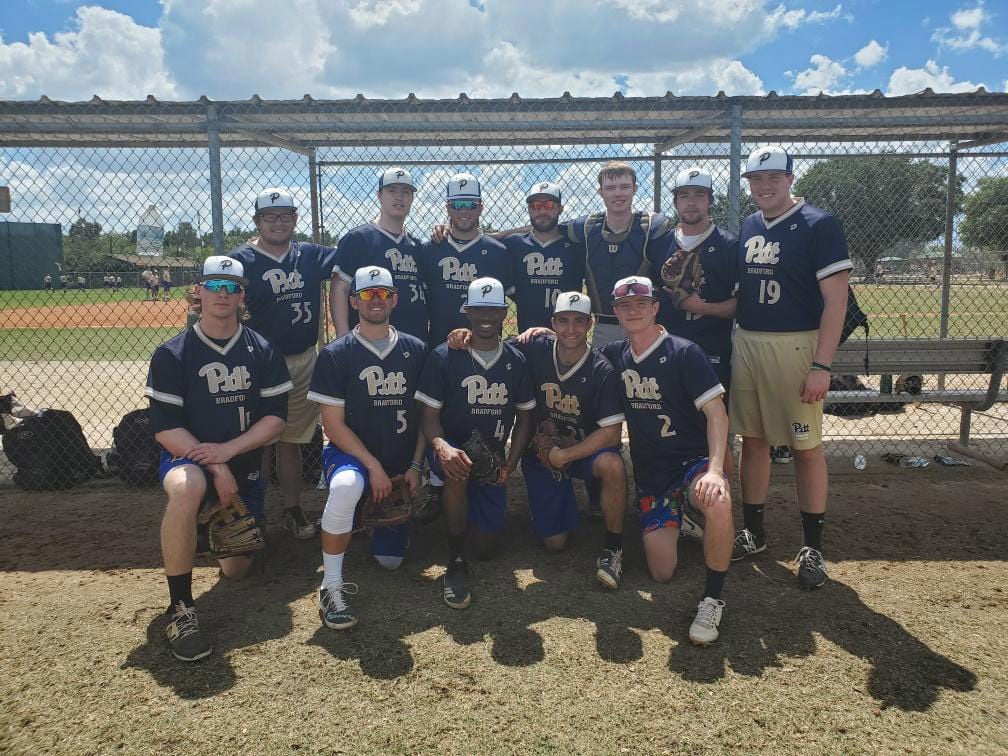 Ryan Boyer’s numbers were turning heads across the country.

The Bradford native and University of Pittsburgh at Bradford senior had struck out 43 batters through four starts, including an astounding 28 Ks during a two-game stretch in late February that earned him numerous Allegheny Mountain Collegiate Conference and national accolades.

He was poised to put together a feel-good comeback season after missing all but one start last year due to injury.

But the rest of the pages in his redshirt senior season will have to remain blank.

As with every other spring collegiate athlete, Boyer — as well as teammates and fellow Bradford natives Andrew Bacha and Sawyer Packard — won’t be able to finish the 2020 season. Instead, Boyer will have to settle for those magnificent first four starts and be left with the thought of what could have been in his final campaign with his hometown Panthers.

“It was disappointing because I felt like I was putting together a really good season as far as strikeout totals and throwing against some good teams,” Boyer said. “But I was more concerned about the team stuff we could have done because who knows what would have happened with me but I feel like we had a really good chance as a team.”

THE WRITING was on the wall well before the NCAA officially nixed the remainder of the spring sports season on March 12. Pitt-Bradford was scheduled to play a slate of games in California during a week-long tournament to kick its 2020 season into full gear. But that never happened, as organizers and school officials out west canceled the tournament as fears over the novel coronavirus began to grow.

So the Panthers scrambled and relocated to Florida, where they were able to schedule several games during that now-infamous sports week.

UPB played two of those: a 10-5 loss Monday to Marietta and a 4-3 loss Wednesday to Bridgewater State.

On Thursday, as collegiate conferences and professional sports leagues all across the globe began to shut down, the global pandemic finally hit the Panthers’ corner of the world.

“It snowballed,” said Bacha, who had appeared in four games to that point. “We got into the vans for the day (Wednesday) and saw that the Ivy League canceled and it’s like, ‘Oh, we’re fine.’ But by the end of the van trip, 40 minutes later, classes are canceled and moved online. We literally walked five minutes to the field and there’s a tweet out that as of Monday all sporting events and such are postponed. We’re all sitting there before our game like, “How is this going to end up? Is this our last one, or what?”

The fateful news was delivered to Bacha, Packard, Boyer and the Panthers’ other nine seniors by head coach Zach Foster at the team’s hotel pool.

“I kind of had the idea way before Coach told us, but I think at that moment I wasn’t even upset; I was more angry,” Boyer recalled. “I just wanted to finish it and I felt like we had something this year. That was my first reaction, I was angry more than sad. A lot of the other guys were crying and I couldn’t even get myself to that. I was just angry.”

IN ADDITION to Boyer’s strong start on the mound, nearly every one of Pitt-Bradford’s top statistical categories was led by a senior. Catcher Joshua Zelinski (Kersey/Elk County Catholic) had a .357 batting average; Samuel Dreistadt had a team-high seven RBI; and Alex Andrzjewski had a staff-low 1.72 ERA in 15 innings pitched.

But it was Boyer’s numbers that stood out — both locally and at a national level. The 6-foot-2 righthander was named Pitcher of the Week by the AMCC, placed on D3baseball.com’s Team of the Week and, most impressively, garnered the Player of the Week award from the National College Baseball Writers Association.

“It was just a continuation of the summer leagues I’ve been in and not being able to throw last year — I only got that one start — and I just kind of built off that and that same kind of stuff,” he said. “My first start didn’t go that well, but the next three just kind of built upon each other.”

Nico Mannion, as expected, leaves Arizona Wildcats for NBA; but where — and when — will he go?

Bacha, meanwhile, threw 12.1 innings over his four appearances, highlighted by a five-inning win over Wells College where he allowed just three hits and one earned run.

He figured to be a critical part of a rotation that would help the team navigate through a grueling back-end schedule that included 18 games in just 27 days in April.

“Day-in and day-out, (Ryan) and I were in the gym doing our program and stuff like that,” Bacha said. “My only start of the year wasn’t that good, but my bullpen appearances I felt were pretty strong. I was off to a pretty good start. Like (Ryan) said, it’s a team thing. If you look at the stats, we had three pitchers in the top five basically in almost every category which was huge because our bats kind of struggled out of the gate but it seemed like they were starting to figure it out a little bit when the news broke. It was tough.”

One of those hitters that was still looking to break out from an early-season slump was Packard. The team’s starting centerfielder appeared in all nine games, but hit just .063 with two RBI.

Packard, who recorded six multi-hit games and made no errors in 29 starts last year, surely would have worked his way back from that slow start. Now he won’t get that opportunity.

THE NCAA announced shortly after it had shelved the spring sports season that it would be granting an extra year of eligibility to athletes that had been affected.

And while that may prolong the collegiate careers of many athletes at the Division I level, both Boyer and Bacha are skeptical that it will have much impact at schools like Pitt-Bradford.

“A lot of guys will have to pay out of pocket for extra semesters that they don’t need,” Boyer said. “It wouldn’t make sense for a lot of the guys. I think you’ll see 90 percent of the guys across D-III not come back, in my opinion. It sucks.”

Added Bacha, “I’ve basically settled upon looking for a career unless something happens as far as tuition is covered — which I’m sure is not going to happen — from the NCAA. I would do it in a heartbeat, but we’ve got lives to live. We’ve got careers to look forward to.”

So unless something drastic changes at the administrative level, the three Bradford boys have played their final game together.

Bacha estimated that the trio had played some 500 or so games together in the same dugout through Little League, the Bradford Drillers, Bradford HS, Bradford Legion Post #108 and at UPB.

And though the abrupt end to that lifelong friendship on the baseball diamond is still raw less than two weeks after the NCAA’s sweeping decision, Bacha and Boyer were able to see the silver lining through the unprecedented circumstances.

“We played together since we were 9 and 10 years old, maybe a little before that even,” Bacha said. “Just all the memories we’ve created over these last four years in addition to the ones that we’ve already had. It’s been fun. It’s just something to add onto it.”

For Boyer, whose strong start to this season as well as impressive numbers in 2017 and 2018 will certainly get him some attention at the next level, he’ll cherish the memories with some of his lifelong friends — and the role he served to get them all into Panther uniforms.

“I was the first one to go to Pitt. Sawyer ended up going to Lock Haven out of school and then transferred (to UPB) his spring semester. Andrew was the next year and I remember calling him and talking to him because he was debating us and Penn State DuBois, and calling him and trying to convince him to come here,” Boyer recalled.

“I look back on that and that was a good time to see the three of us come back together like that even though we had different paths.”

Clear skies this evening will give way to cloudy skies and rain overnight. Low 43F. WSW winds shifting to SSE at 10 to 15 mph. Chance of rain 90%.

Clear skies this evening will give way to cloudy skies and rain overnight. Low 43F. WSW winds shifting to SSE at 10 to 15 mph. Chance of rain 90%.