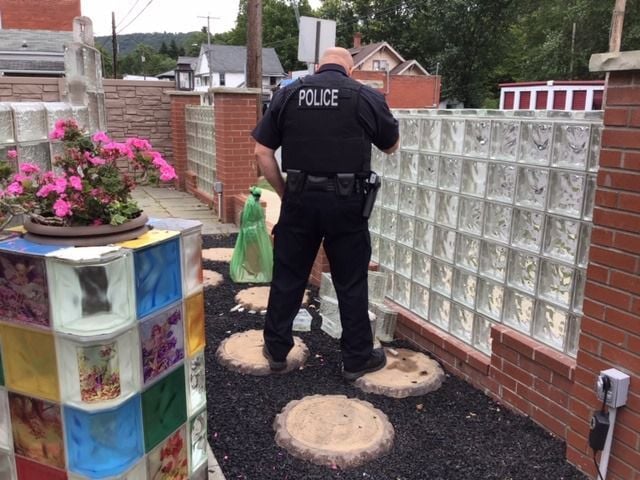 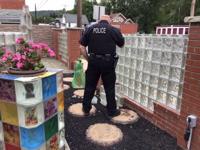 A Port Allegany police officer inspects the damage caused to the Serenity Glass Park, which was vandalized Labor Day morning. 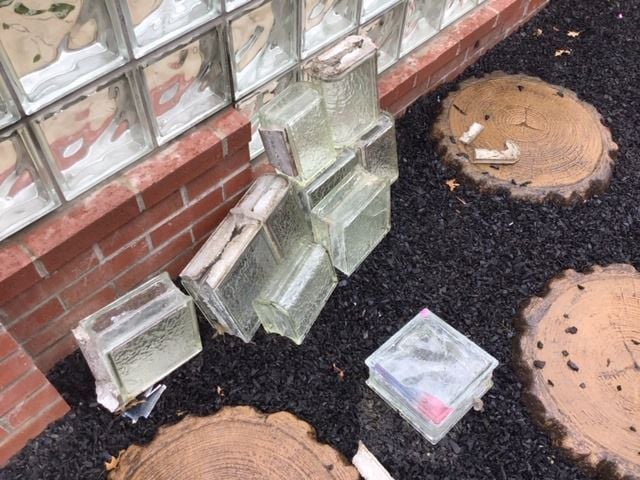 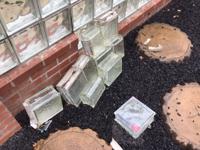 A wall of the Serenity Glass Park that was damaged by vandals early Labor Day morning.

A Port Allegany police officer inspects the damage caused to the Serenity Glass Park, which was vandalized Labor Day morning.

A wall of the Serenity Glass Park that was damaged by vandals early Labor Day morning.

Many members of the Port Allegany community and surrounding areas were saddened on Labor Day, after someone reportedly vandalized the much cherished Serenity Glass Park, located at the intersection of Route 6 and Mill Street, during the early morning hours.

According to Susan Carlson, design director, the vandals took off two rows of the glass castle wall. Due to the solid construction of the walls and the thickness of the glass bricks, she believes the damage was most likely done by teenagers or adults, using some sort of tool to break it apart.

Carlson said they can build the wall back up with some glass cap pieces volunteers scrounged up, though it will never be like the original because the individuals stole some of the unique hummingbird and ice skate blocks that were broken out.

Going forward, they plan on putting in a security system, more lighting and alerting the neighbors to look for suspicious activity.

“Hopefully we’ll raise a little money and we’ll be able to put the security system in as fast as we can,” said Carlson. “There is so much history in the park that means so much to so many people.”

Carlson explained how the park is basically like a standing time capsule. The park is located on land owned by the McKean County Redevelopment and Housing Authority. The process of developing the park started in 2014, though most of it was constructed between 2016 and 2017. Carlson and art director Brenda Freeman Sawyer, along with many volunteers and donors helped bring the beautiful structure to fruition.

The Floyd Concept to perform at Struther’s

“The park has all been built with raised funds,” said Carlson. “It just shows the ingenuity and the marvelous products that the area has made and are making. It’s dedicated to people who make things and create things and make the world better because of that.”

Every year since its construction, volunteers have been adding a message block that has people’s information, messages for the future and other historical information. The park will inevitably serve as a historic landmark for future generations to learn more about their predecessors and the rich history of the area.

When perusing the park, one can easily see the many different businesses and industries incorporated throughout the structure.

“Through the middle, we have glass blocks on a cement walkway with all the symbols of the Seneca Indian Nation. We were their hunting grounds,” Carlson explained. “There’s history all throughout the place — the gas industry, the lumber industry — you’ll find a lot of history if you read some of the messages on the walls.”

A $100 reward is being offered for any information that leads to the identification of the individual or individuals who are responsible for the damage. Anyone with information related to the incident is asked to call the Port Allegany Police Department at 814-642-2604.

Those interested in volunteering for the park or providing a donation can contact Susan Carlson at susanhcarlson@gmail.com.