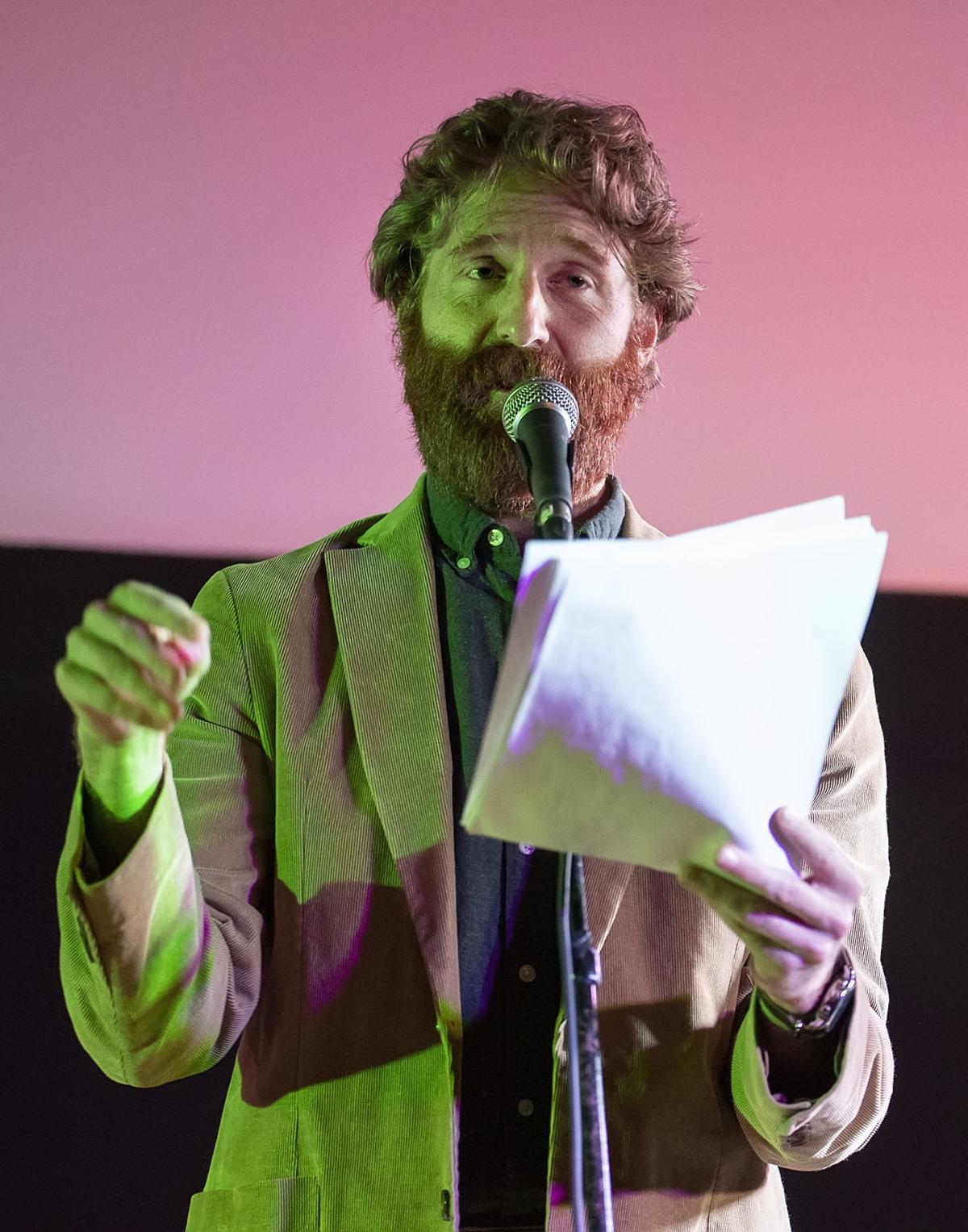 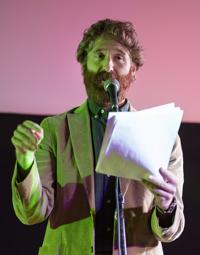 Sean of the South reads letters from his listeners during a live recording of his podcast Thursday at the Main Street Movie House. 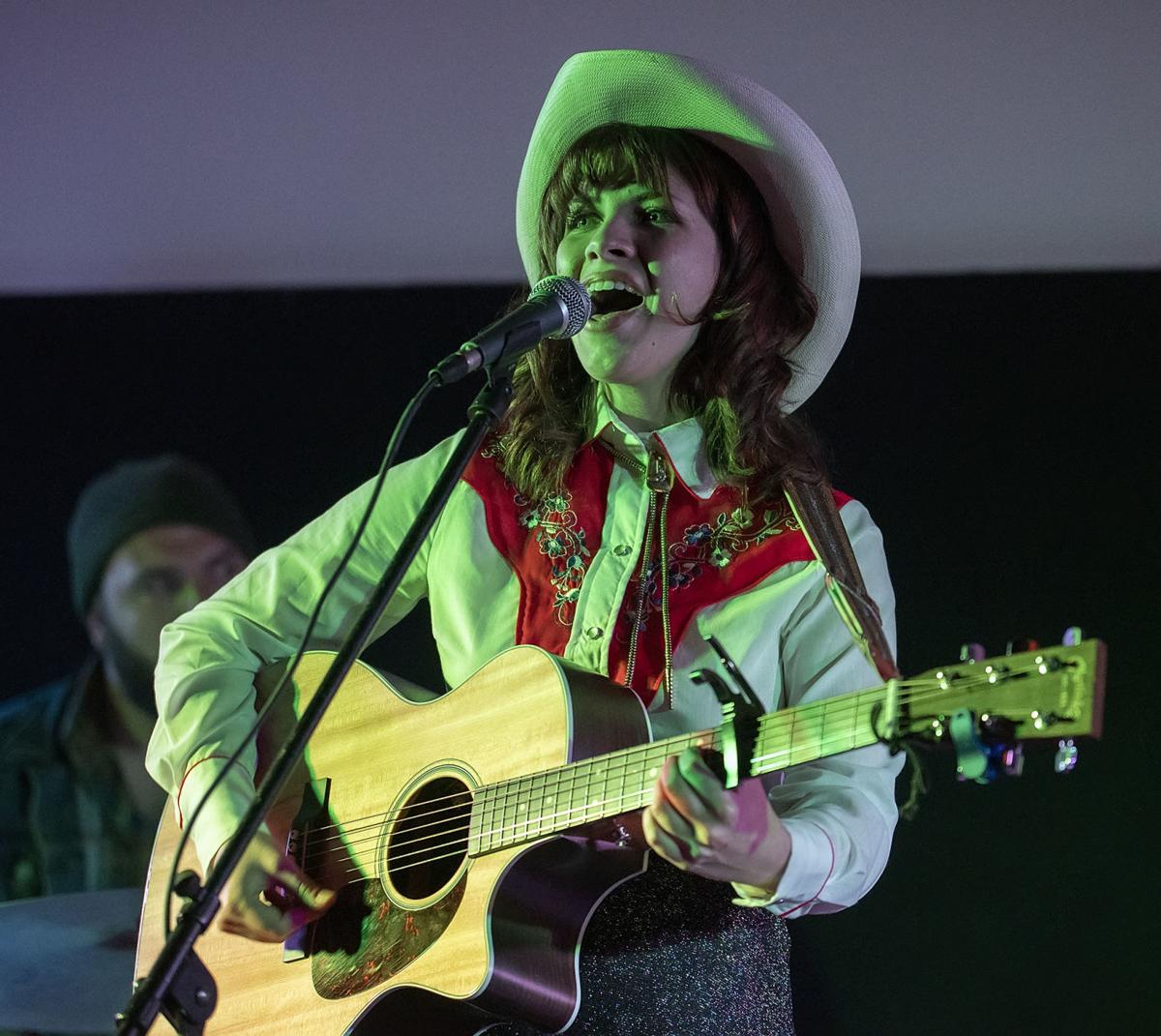 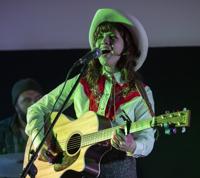 Singer/songwriter Angela Autumn performs an original country tune as part of the Sean of the South podcast that was recorded Thursday in Bradford. The full band that backed Autumn up included a Kane native: double bassist Trish Imbrogno.

Sean of the South reads letters from his listeners during a live recording of his podcast Thursday at the Main Street Movie House.

Singer/songwriter Angela Autumn performs an original country tune as part of the Sean of the South podcast that was recorded Thursday in Bradford. The full band that backed Autumn up included a Kane native: double bassist Trish Imbrogno.

How many syllables are there in the word ham? According to Sean Dietrich, the answer is two — and us Pennsylvania folks talk funny.

Dietrich, based in the Florida Panhandle, and the Angela Autumn band recorded an episode of the Sean of the South podcast at the Main Street Movie House Thursday evening as part of the Bradford Creative and Performing Arts Center’s season.

“It feels a little bit like a foreign country,” Dietrich said, explaining he’d never been this far north before. He went in a store to order a ham and turkey sandwich, and the clerk knew he was not from Pennsylvania.

And he learned that addressing a group of folks is not “y’all,” but “yinz” or “you’z,” he told the crowd.

The first half of the show was mostly musical, with original songs from Autumn and her band, which includes Kane native Trish Imbrogno on the upright bass.

Dietrich would talk to the audience a bit between songs, and read some fan letters with Andy Dutko accompanying him on piano. One letter, from Jared in Towanda, Pa., was welcoming Dietrich to record his 100th podcast in Bradford. The writer gave him touristy tips, telling him to visit the Kinzua Bridge while he was here.

After several songs, Dietrich told the audience “Now we get to the part of the show that we refer to as the boring part.”

And he started to tell a story, painting a picture of a Southern Baptist gathering at his church so well that one could nearly smell the plates of fried chicken at the start of the line for the potluck dinner.

“For Southern Baptists, food is the only four-letter word that is permissible to use,” he said.

He described the tiny social hall with the asbestos ceiling, the tables lined up with food in categories, the white paper plates as thin as Bible pages, and the octogenarian cooks with their family recipes for things like green casserole and tomato aspic with shrimp on top.

“There were two large orange barrels with the white Igloo labels,” he said. In these barrels, which were the size of a beer keg, was tea — but since it’s in the south, it’s sweet tea and sweeter sweet tea. “Tea with copious amounts of sugar,” Dietrich said.

There was an order to the food line — chicken, then casseroles, everything possible made with green beans, potatoes and then “the no man’s land: congealed solids.”

While the audience may not have known what it was like to grow up a Southern Baptist, Dietrich’s down-home storytelling approach and self-deprecating humor made him a hit with the Bradford crowd.

The next BCPAC show will be “A Jazzy Little Christmas” at 7:30 p.m. Dec. 1 in the Bromeley Family Theater at the University of Pittsburgh at Bradford.