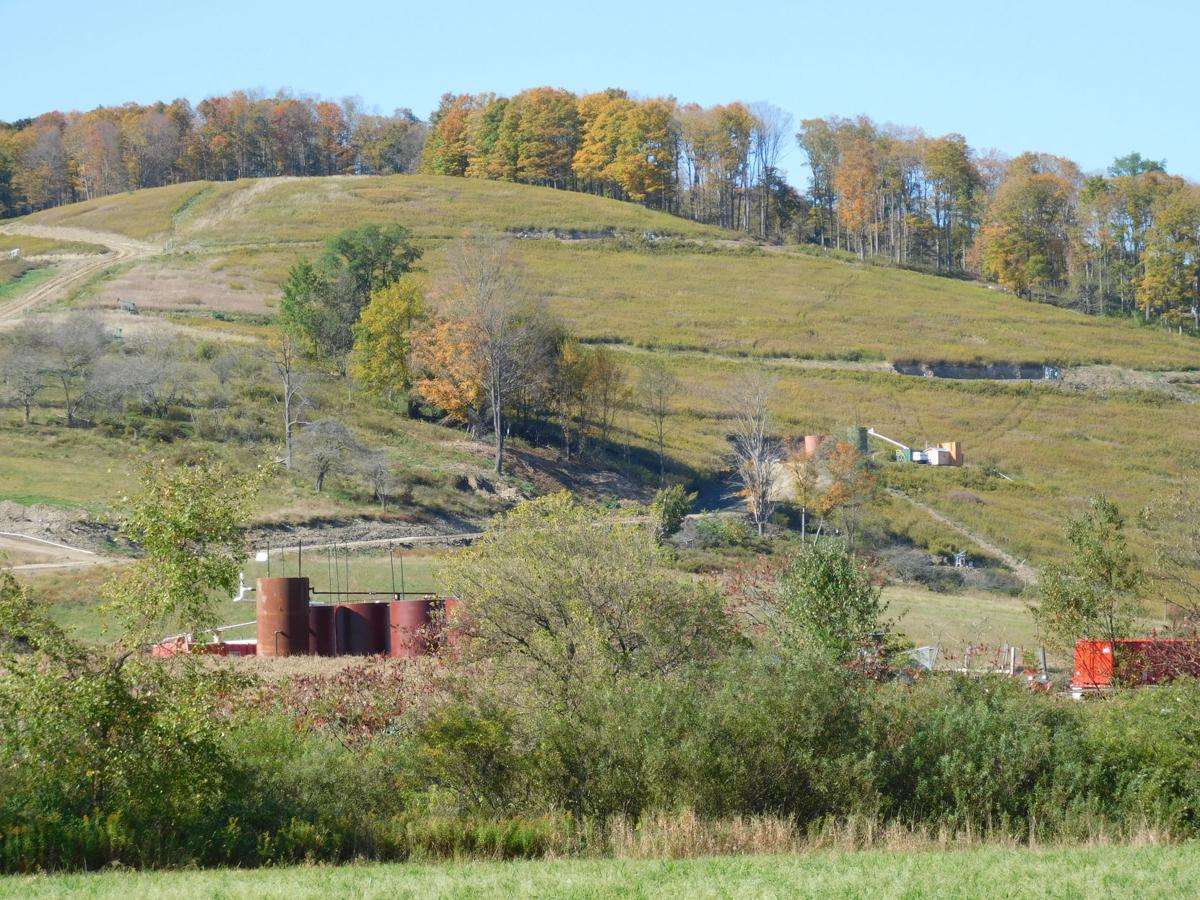 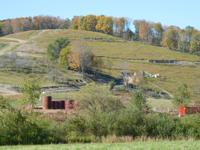 This Dimes Energy oil operations site, seen from the West Branch Road in the town of Allegany, has caused concerns from residents who have complained of noise from the site and dirt on roads from trucks. 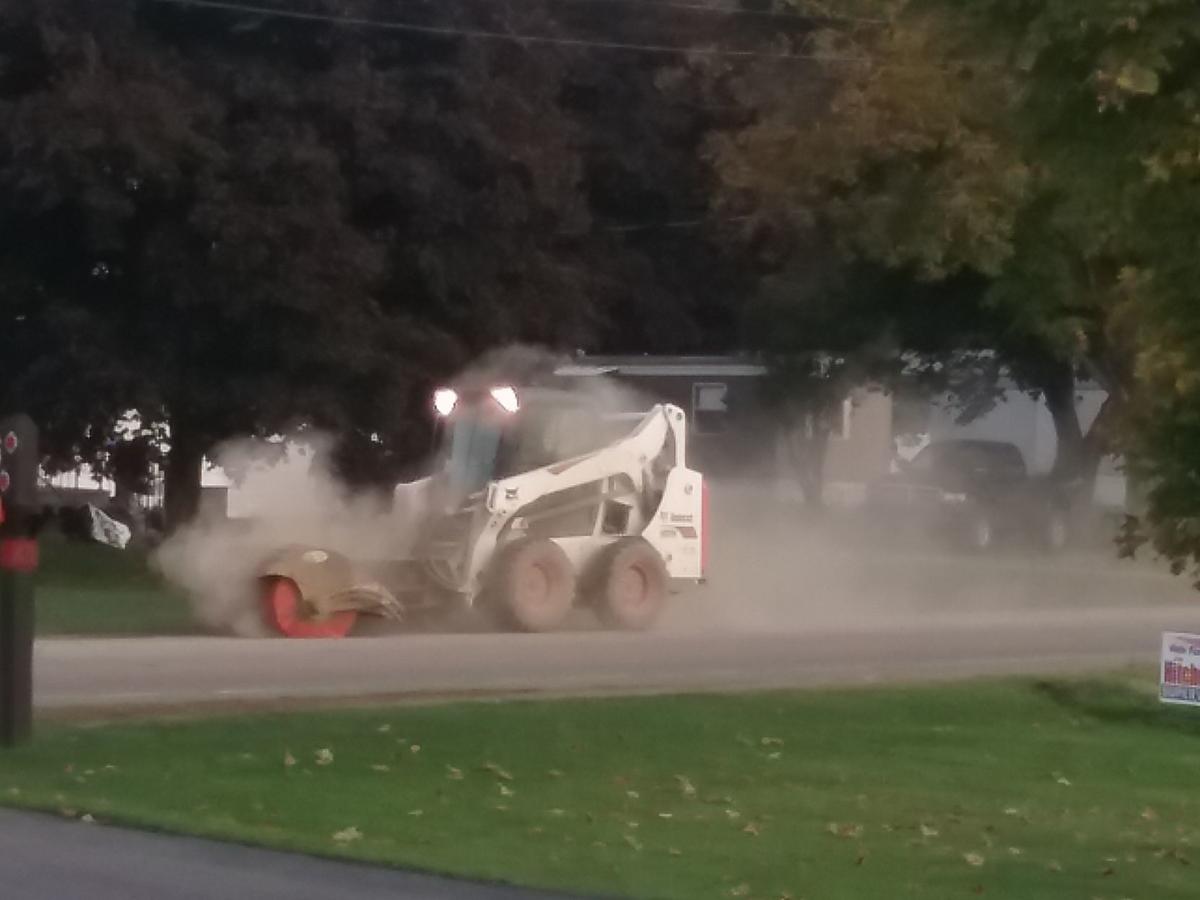 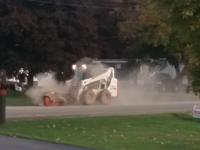 This street sweeper seen along Four Mile Road Thursday cleared dirt left by trucks from the Dimes Energy oil well site, but also created plenty of dust for nearby households.

This Dimes Energy oil operations site, seen from the West Branch Road in the town of Allegany, has caused concerns from residents who have complained of noise from the site and dirt on roads from trucks.

This street sweeper seen along Four Mile Road Thursday cleared dirt left by trucks from the Dimes Energy oil well site, but also created plenty of dust for nearby households.

ALLEGANY, N.Y. — The quiet mornings of living near farmland on Four Mile Road were disrupted this past spring and summer for Nancy and Dale Shively when oil drilling began on the hillside behind their home.

The couple, who have lived in the Four Mile valley since the mid-1980s and are now retired, said that over the past several months noise from drilling and other operations on the eight to 10 oil wells behind their home had started as early as 5 a.m. most days. That issue has been coupled with mud and dirt left on the road in front of their home by heavy trucks.

Their concerns are that oil production by Dimes Energy will expand along the hills behind their home as well as along the nearby West Branch Road, and create similar issues for other households. Property for drilling has been leased to the company by local landowners who no longer farm the land in the former agricultural valley.

“I know this is (the property owners’) land, but they have to take into consideration there are neighbors in front of their land” and suffering the consequences, Nancy Shively said.

Meanwhile, an official with Dimes Energy said the company does indeed plan to expand the project to as many as 400 wells in the area, thereby generating dozens of jobs and adding to the town’s tax base. The company also has plans to further mitigate sound emitted by generators at the project sites and dirt left on community roads, as much as possible.

“This is quiet compared to what we suffered with all this summer,” Shively said earlier this week at her home while looking at oil wells and equipment on the hillside. “There was pounding and pounding, banging against metal and drilling.”

The couple said other families voiced similar complaints to them, but have been reluctant to speak out publicly on the issue. The Shivelys said they don’t want to come off as complainers, and understand they have no say regarding production on someone else’s land. However, they would like to see more done by the company, the town of Allegany or the state Department of Environmental Conservation to cut down on the intrusiveness of the project.

They said the company had told them a sound barrier was built near the project site behind their home. Despite this, the sound from generators can still be heard. In addition, a street sweeper provided by the company to clear the mud from the road in front of their home removes the dirt, but often creates thick dust that is blown on their home.

Town Supervisor Kathy Martin said the drilling project had received a permit from the DEC for the agriculture/forest area.

“It’s all regulated by the DEC,” Martin added. She also noted the town had received a couple of complaints from residents in that area regarding the project.

Matt LeBlanc, director of operations for Dimes and a resident of Allegany, said he is happy to be part of a project that is expected to expand to the aforementioned 400 oil wells over the next few years from the Four Mile and West Branch roads to the Chipmonk Road area and Nichols Run. The wells are expected to create dozens of jobs for residents in New York and Pennsylvania.

Currently, there are as many as 65 people a day who work with local contractors at the sites.

“I love working for Dimes Energy, but I’m also passionate about the fact that this is our town,” LeBlanc said. “I’m excited to see something built in this area that had waned, especially in a depressed area where there are not a lot of opportunities.”

LeBlanc said the construction phase along Four Mile is expected to be completed by Jan. 1. He said 90 percent of the noise, dirt and traffic will go away when the work is done on that project. Trucks hauling oil and water from the site will continue, however.

“You’ll probably see a truck anywhere from three to six times a week that will come in and pick up oil,” he explained, adding the oil is hauled to American Refining Group in Bradford, Pa. “There will be another truck that comes in several times a week to take away produced water.”

In addition, there will be a well tender, or operator, who will travel to the site on a four-wheeler.

LeBlanc said the company has rented a street sweeper at $3,600 a month and has used it to clear the residential road since May. He admitted there is “no perfect solution” to completely clearing the road of all dirt or dust.

“We’re doing everything we can to mitigate it,” he said. “We’re bringing in quite a bit of stone” to cover the driveway leading to the wells. In addition, stone will be layered on another project site farther up the Four Mile.

“When we work with the DEC, we always want to remain compliant,” LeBlanc added. “As much as possible, we don’t want to be an issue with the residents that are living there.”

Kristen Davidson, public affairs officer with Region 9 of the DEC in Buffalo, said the agency continues to work with Dimes to ensure compliance is met with permits issued to drill wells.

“After reported 4:30 a.m. operation start times, DEC directed operations to start at 6 a.m., and is regularly inspecting the area to ensure operations start at the designated 6 a.m. time,” she said.

LeBlanc said the company has tried to further mitigate the situation by directing crews to start at 7 a.m.

Davidson said that in response to residents’ concerns with noise from a generator at the site, the DEC directed Dimes to mitigate the sound either by moving it farther back on the property, or making the generator quieter.

“In response, Dimes built a three-sided wall to deflect and absorb noise from the generator,” she stated.

She said the DEC encourages community residents to contact them at 379-6384, the Oil & Gas general phone number, or send emails to region9@dec.ny.gov to report complaints.