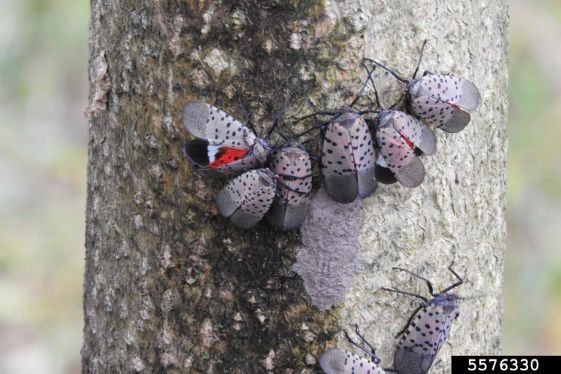 Spotted lanternfly, an invasive species, have been found in Cameron County. 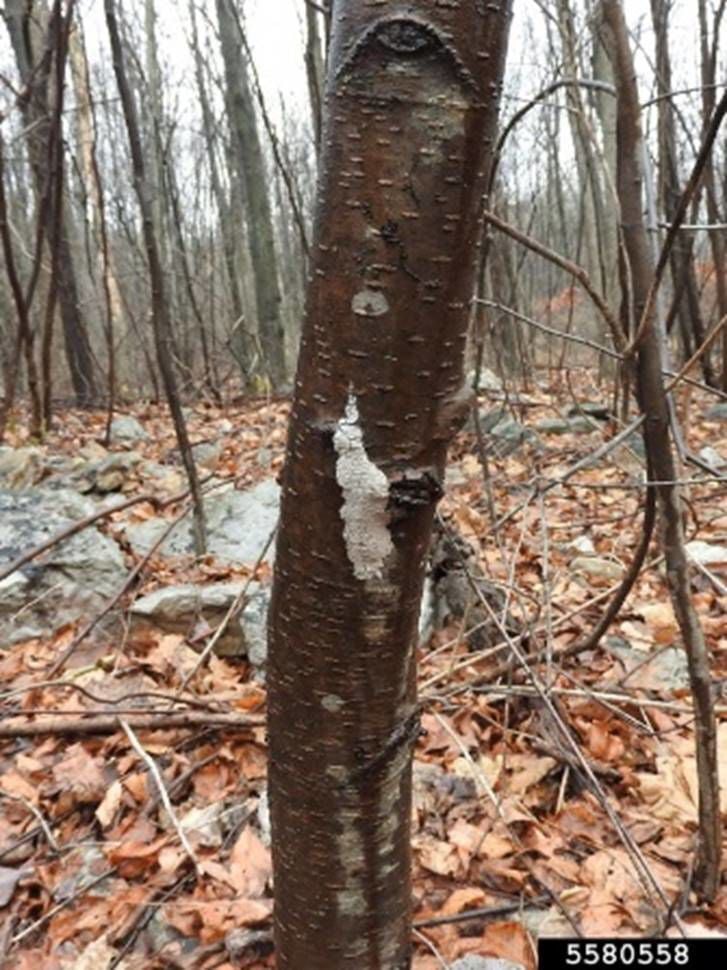 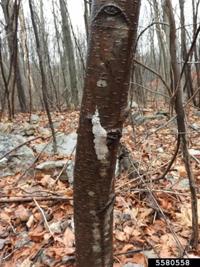 An egg mass of the spotted lanternfly can withstand the cold, and should be destroyed if found.

Spotted lanternfly, an invasive species, have been found in Cameron County.

An egg mass of the spotted lanternfly can withstand the cold, and should be destroyed if found.

The invasive spotted lanternfly has been found in Pennsylvania and 8 other northeastern states since its discovery in 2014.

As of May 2020, there are 26 counties in Pennsylvania under quarantine for the lanternfly and most recently it has been discovered in Cameron County. SLF is native to China and was initially discovered in the United States in Berks County. Because of the difficulty in controlling SLF infestations, Pennsylvania is seeing economic losses of $50 million annually from the impacts to hardwood, ornamental plant, and grape industries.

Adult SLF are distinguished by black bodies and gray wings dotted with black spots. Hind wings will have a red and white pattern that is visible when flying. After hatching from eggs in the spring, SLF has four nymphal stages during which individuals are small and hard to locate. The first three stages are all black with white spots before turning red with white dots and black stripes in the final nymphal stage. By July, adult SLF will begin appearing and will remain active until winter.

Female SLF will deposit 30-50 eggs in egg masses protected by a mud-like covering in September and October. These eggs will be laid on hard surfaces such as trees, decks, bark, stone, trains, houses, and vehicles. While adult SLF do not survive the winter, the egg masses are able to withstand the cold and hatch in the warmer spring weather.

The durability of the egg masses and the fact that they can be laid on virtually any hard surface enables the spotted lanternfly to make its way across large distances as a passenger on moving vehicles or cargo. Within quarantine zones, shipments and vehicles are checked for egg masses to reduce the spread of SLF. Homeowners are encouraged to destroy egg masses whenever found and the most effective way is to scrape them off using a plastic card or knife and then disposing of them in rubbing alcohol or fire.

Spotted lanternfly are of high concern due to the damage they inflict on trees and plants, like grapevines. Both the nymphs and adults feed by sucking sap from stems and leaves, which can cause damage to individual plants. However, the real harm is from the excretion of honeydew, a sticky substance that promotes the growth of sooty mold. When large swarms of SLF are concentrated in a single area, the copious amount of honeydew they excrete can have serious detrimental effects on plant growth and fruit yield. SLF feeds on many plant species, including grapes and fruit trees, but its preferred host is actually another species invasive in Pennsylvania: tree-of-heaven.

Tree-of-heaven is a rapidly growing deciduous tree native to China and Taiwan. It was introduced to the United States as an ornamental shade tree in Philadelphia in the late 1700s and has since become invasive to the point that it is listed as a noxious weed in Pennsylvania. It is now common in landscapes and disturbed areas such as roadsides. Tree-of-heaven can reach up to 100 feet tall and 6 feet in diameter. It has brown-gray bark that resembles the skin of a cantaloupe and has long, pinnately compound leaves ranging in length from 1 to 4 feet. The leaves and other plant parts give off a strong, offensive odor when crushed. Current management for tree-of-heaven is focused on removing it, which can be difficult due to its extensive root system and ability to resprout. Cutting tree-of-heaven is ineffective because it will simply produce large numbers of stump sprouts, therefore it is recommended to control it with systemic herbicide application in mid-to late summer. Because it is a preferred host for SLF, it is also being used as a trap tree by treating it with an insecticide that will move throughout the entire tree. When SLF adults feed on the treated tree-of-heaven, they ingest the insecticide and die.

Report any sightings of SLF in McKean County (or outside the quarantine area) to the Pennsylvania State University Extension at extension.psu.edu/spotted-lanternfly or call 1-888-4-BADBUG (1-888-422-3359).