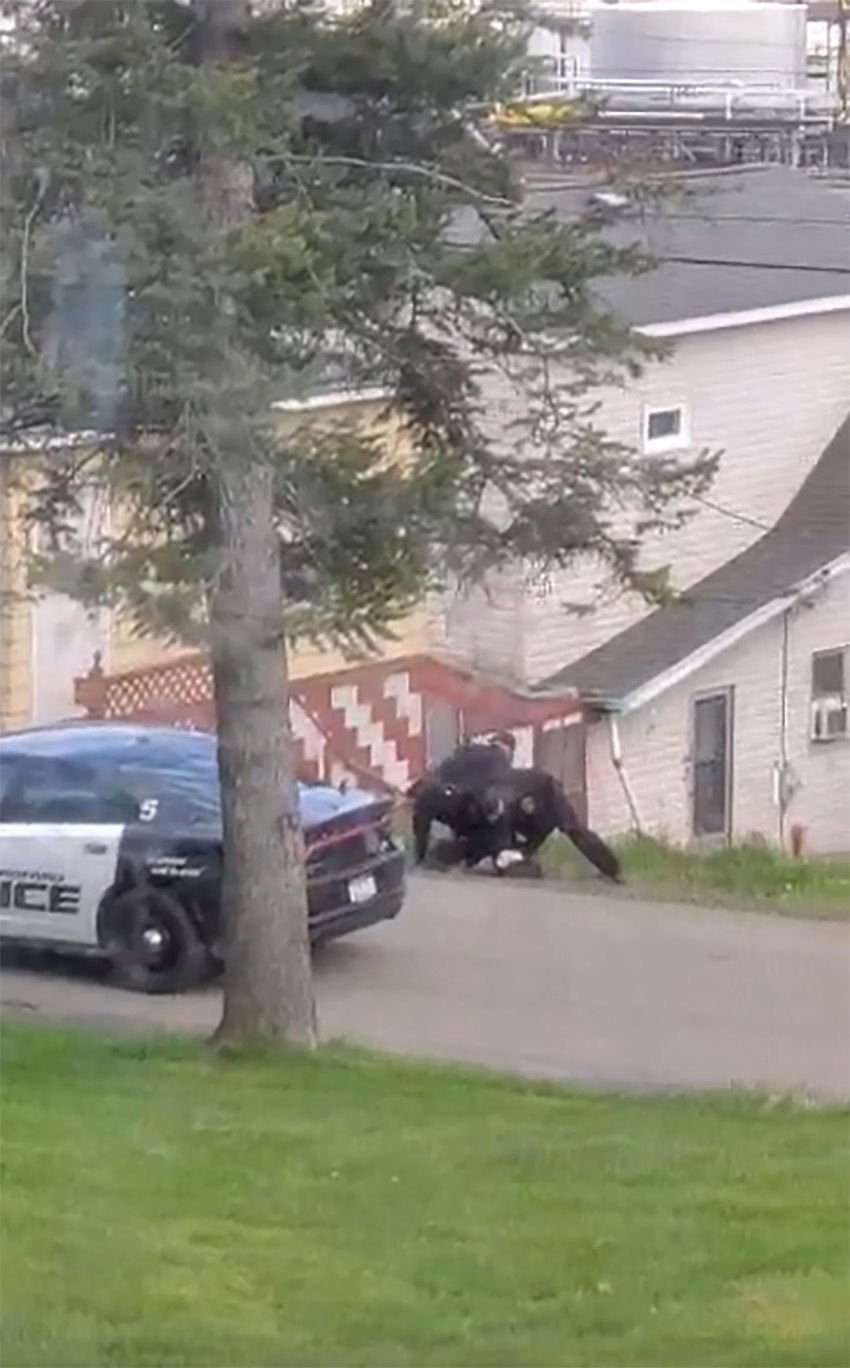 This still shot taken from the video of Matthew Confer’s arrest shows Bradford Police Chief Hiel “Butch” Bartlett and Patrolman Matthew Gustin pinning Confer to the ground during a struggle. Bartlett can be seen pushing Confer’s face onto the ground in the frame. 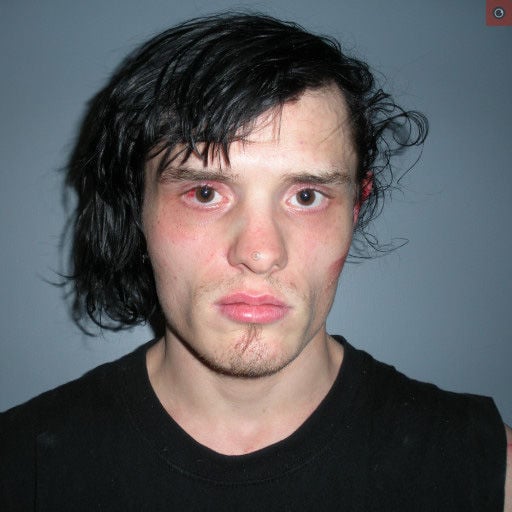 This still shot taken from the video of Matthew Confer’s arrest shows Bradford Police Chief Hiel “Butch” Bartlett and Patrolman Matthew Gustin pinning Confer to the ground during a struggle. Bartlett can be seen pushing Confer’s face onto the ground in the frame.

A complaint alleging misconduct by the Bradford City police chief and one of his officers during a May 5 arrest has been received by city officials.

The complaint pertains to the arrest of Matthew Confer during a domestic incident along Delaware Avenue.

“Late last week, the city received a complaint from a citizen regarding an incident that occurred Tuesday, May 5th, 2020 on Delaware Avenue alleging misconduct on the part of the responding officers,” Bradford Mayor James McDonald said in an official statement. “We have received inquiries about the incident.”

According to an affidavit of probable cause from the police department, officers — identified in charging documents as Patrolman Matthew Gustin and Chief Hiel “Butch” Bartlett — were dispatched to the domestic incident at approximately 6:18 p.m. Upon arrival, Confer, 25, was located in the street chasing another man. Officers were able to split the two up.

Upon investigation, the release says, it was learned that Confer was involved in a physical altercation with a woman, and a video of the incident was shown to officers. Charging documents identified the woman as Confer’s girlfriend.

According to the affidavit, Confer was then placed under arrest, but ran from officers and was subsequently tased. As a result, he fell into nearby fencing and was pulled back onto a driveway and handcuffed.

From there, the affidavit says, police removed the taser probe and collected the spent cartridge, and then moved Confer from the ground to place him into a police vehicle.

From there, police say, he “pushed back into (Gustin) and I pulled him to the ground where he began to kick at me and Chief Bartlett. After several seconds we were able to get him on his stomach and into the patrol vehicle where he continued to kick at us. Matthew was then maced to stop the aggression and comply.”

A video of the arrest posted to Facebook — and since taken down by bystander Brian Chapman — showed some of the struggle, but the video did not begin until the later parts of the incident, after the taser was deployed and Confer was being taken to the cruiser.

In the video, which was viewed roughly 6,000 times as of Monday afternoon prior to its removal, Confer can be seen handcuffed and being escorted to the cruiser by officers while lightly struggling with them by attempting to pull away. Bartlett and Gustin are able to get Confer to the cruiser.

Confer, who was facing the patrol car at this point, appears to take a step back while Gustin is behind him, though the view of this segment in the video is partially obstructed by a tree and by the vehicle.

From there, the video shows Gustin pulling Confer onto the ground, where Confer continues to struggle with officers and attempts to kick Gustin. Confer is subsequently pinned to the ground by Gustin and Bartlett, the latter of which presses the left side of Confer’s face onto the ground.

The officers then drag Confer, who wouldn’t stand up on his own, to the cruiser. He’s placed inside the vehicle, and is shortly thereafter maced by Bartlett while still in the back of the cruiser. None of Confer’s actions from within the car can be seen on the video.

According to Bradford police policy, “The policy of the City of Bradford Police Department is to use only that amount of force which the officer determines to be reasonably necessary in making an arrest or subduing an attacker. In all cases, this will be the minimum amount of force that is necessary.”

Policy regarding the use of oleoresin capsicum — or mace — is as follows: “Officers may use the O.C. agent in the performance of police duties when officer presence, verbal/non-verbal dialogue, passive control has failed, or is not practical based on the circumstances.

“Consideration should be given to situations in which an overspray of O.C. could create a more hazardous condition. Passive control shall consist of light subject control, escort techniques and handcuffing. However, there may be situations when the O.C. must be utilized before the above mentioned steps are exhausted. Conversely, there may be situations when mechanical compliance / Impact weapons have to be utilized first based on circumstances.”

A subsequent mugshot of Confer shows an apparent injury to the left side of his face and an apparent broken blood vessel in his right eye. It is unclear when these were sustained.

In a statement to The Era, Chapman, who took the video of the incident, said, “We want to make one thing clear: we are grateful for frontline workers! Law enforcement remains one of the most respected career paths and we hold our public servants with high regard, especially during these times. Furthermore, we love our city and never wish to defame it.

“It’s truly unfortunate that situations like this exist, but what’s done in the dark shall be brought to light one day. There’s no doubt that our officers are placed under extreme pressures. Let this be a message to armed forces everywhere: an officer’s mental health should be in constant evaluation to not compromise the civil rights of the citizens they are sworn to protect.”

Confer was charged by Bradford police with three offenses, two pertaining to his struggle with Bartlett and Gustin and the other pertaining to the domestic incident beforehand.

The charge pertaining to the alleged domestic incident was a single count of simple assault, a second-degree misdemeanor.

In a statement, McKean County District Attorney Stephanie Vettenburg-Shaffer said, “We are required to review every case and, after a review of this case was completed, which included a review of the complaint, the affidavit of probable cause, reports and videos, some of the charges were withdrawn as the elements of the crimes could not be met.”

McDonald indicated in his statement that an impartial review will be conducted regarding the actions of the officers.

“It is important for the citizens of Bradford (to) know that this situation will be reviewed thoroughly and promptly. The safety and welfare of the public as well as the integrity of the police department are both critically important. An impartial review will serve the interests of all stakeholders.

“I would ask that the public allow us the needed time to properly investigate this situation. We are aware and sensitive of the need to expedite this review. However, we also have an obligation to protect the rights of our employees. As this issue is a personnel matter, we will make no further comment at this time.”

Bartlett, who was appointed to his position at the beginning of the year, declined comment on Tuesday night. A request for comment made to the public defender’s office, which is representing Confer, was not returned in time for publication.

Bartlett has previously been sued for excessive force during his career. In 2015, a lawsuit alleged that on March 14, 2014, a student in his life skills/emotional support class at Bradford High School — where Bartlett was the school resource officer at the time — was growing uncooperative and increasingly agitated after being asked to sit up and do his work by the teacher and subsequent requests to go to the hallway to speak with the dean of students and then later go to the office. The student was identified only by the initials T.K.

As the situation deteriorated, the student had his fist raised, and Bartlett, according to his attorney’s response to the suit, “following police protocol, pulled out his pepper spray and told T.K. that he would count to three before using it unless T.K. cooperated, got out of his seat and went into the hallway.”

Bartlett subsequently reached three, sprayed the student with pepper spray, and then, according to the suit, “pulled T.K. from his desk and pushed him to the floor, where he held T.K. down for 30 to 40 seconds.”

The student was handcuffed while on the floor and taken to Bartlett’s office.

The response also said Bartlett “followed proper procedure in placing T.K. on the floor and restraining him so that he would not be a threat to any other persons. All of this was according to police protocol and proper procedure.”

Bartlett’s actions were deemed to be within the proper protocol of Bradford City Police at the time, and the matter was settled out of court for an undisclosed amount.

Intervals of clouds and sunshine. A stray shower or thunderstorm is possible. High near 75F. Winds NW at 10 to 15 mph.