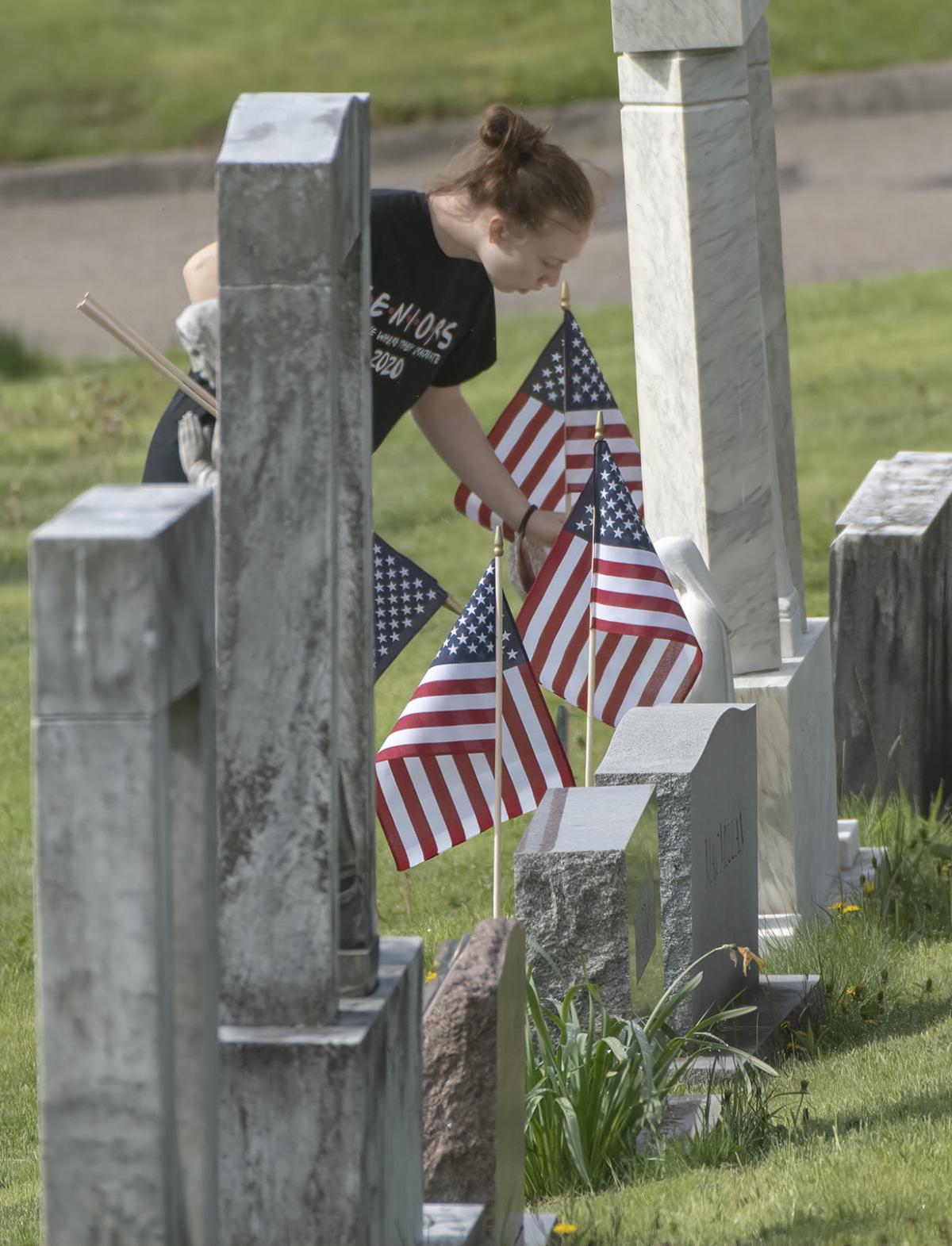 Alexandria Safran, one of several members of the Bradford Area High School Pride Club, attaches flags to the graves of veterans on Saturday at St Bernard Cemetery. The Pride Club, which was one of several groups helping out Saturday, does volunteer work in the community, doing tasks such as organizing food drives and helping out at the Friendship Table. 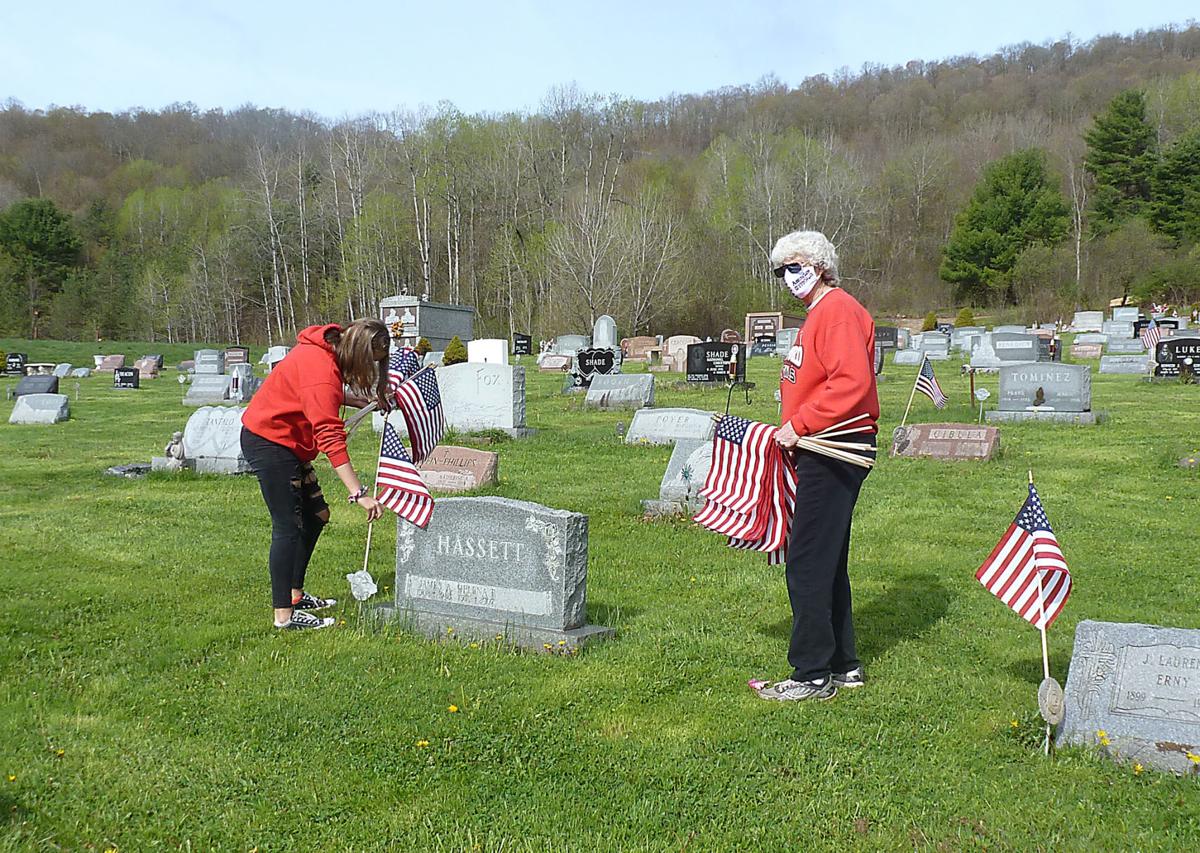 Alexandria Safran, one of several members of the Bradford Area High School Pride Club, attaches flags to the graves of veterans on Saturday at St Bernard Cemetery. The Pride Club, which was one of several groups helping out Saturday, does volunteer work in the community, doing tasks such as organizing food drives and helping out at the Friendship Table.

Bradfordians won’t be able to honor servicemen and women who died fighting for the nation with the same public fervor as past years.

But it’s evident they are looking for quiet ways to show their appreciation for this upcoming Memorial Day.

Due to social distancing efforts, a parade will not make its way down Bradford’s Main Street on May 25, and the community will not gather in Veterans Square to remember the lives lost.

However, for anyone passing the St. Bernard Cemetery on Saturday, they would have seen people, donning masks, scattered all over the grounds placing flags at the graves of veterans.

“This is the largest turnout,” said American Legion Post 108 Commander Bob Witchen of the volunteers.

It was certainly a surprise for Witchen, who was concerned they would not have enough help due to the pandemic. He went to Facebook seeking additional hands.

The volunteers received flags at the bottom of the cemetery by West Washington Street, then ascended the hillside on which the cemetery sits in search of veterans’ gravesites. While the sun greeted visitors on Saturday, the ground was still soaked from the previous evening’s storms.

Legion Auxiliary member Jamie Rhoades said those veterans helped secure the freedom Americans have today. “The least I can do is come out today and celebrate them,” she said.

Julie Frederick, mother of Bradford basketball player Sierra Taylor, explained the Legion had been scheduled to host the basketball team’s banquet, and an officer from the Legion mentioned the need for volunteers to put flags in the cemetery.

“We figured the smiles on (the players’) faces would help lift spirits,” she said.

Coach Bob Hannon said they thought it would be good to get the team outside after months of no activity, too.

Scout Master Ronald Barker of Bradford Troop 499 said the Scouts were “excited to be out doing something,” too.

Helping the Bradford veterans’ groups honor the deceased veterans was a perfect project for the Scouts.

“The Boy Scouts are a service-based organization, and we can find no finer service than honoring our military veterans,” Barker said.

Barker wanted to keep the community safe during the project, so he made a point of having his Scouts arrive early to promote social distancing. He wanted to be able to pick up their flags and be scattered in the cemetery before the whole group arrived.

For the Bradford Area High School Pride Club, students join so they have opportunities to volunteer in the community.

As Karlie Deming, club president, explained, “We try to reach out to the community at least once a month.”

With the new coronavirus stopping some of their normal volunteer efforts, Pride Club members were anxious to get back out in the community. They have made special efforts over the years to honor those who have served: “Anything to give back to our veterans,” said Deming.

According to Deming, they have helped with the Honor Flight program, and last year they placed flags at Oak Hill Cemetery.

According to the U.S. Department of Veterans Affairs, the predecessor of Memorial Day — Decoration Day — began more than 150 years ago. In 1866, local observations began cropping up around the country to honor Civil War dead. By 1868, the commemoration became widespread due to participation by the Grand Army of the Republic.

By century’s end, Decoration Day was being celebrated across the nation on May 30, and after World War 1 it was expanded to honor those who died in all American Wars, according to the Department of Veterans Affairs. In 1971, Memorial Day was declared a national holiday to be celebrated on the last Monday in May.

Some clouds. A stray shower or thunderstorm is possible. Low 62F. Winds light and variable.