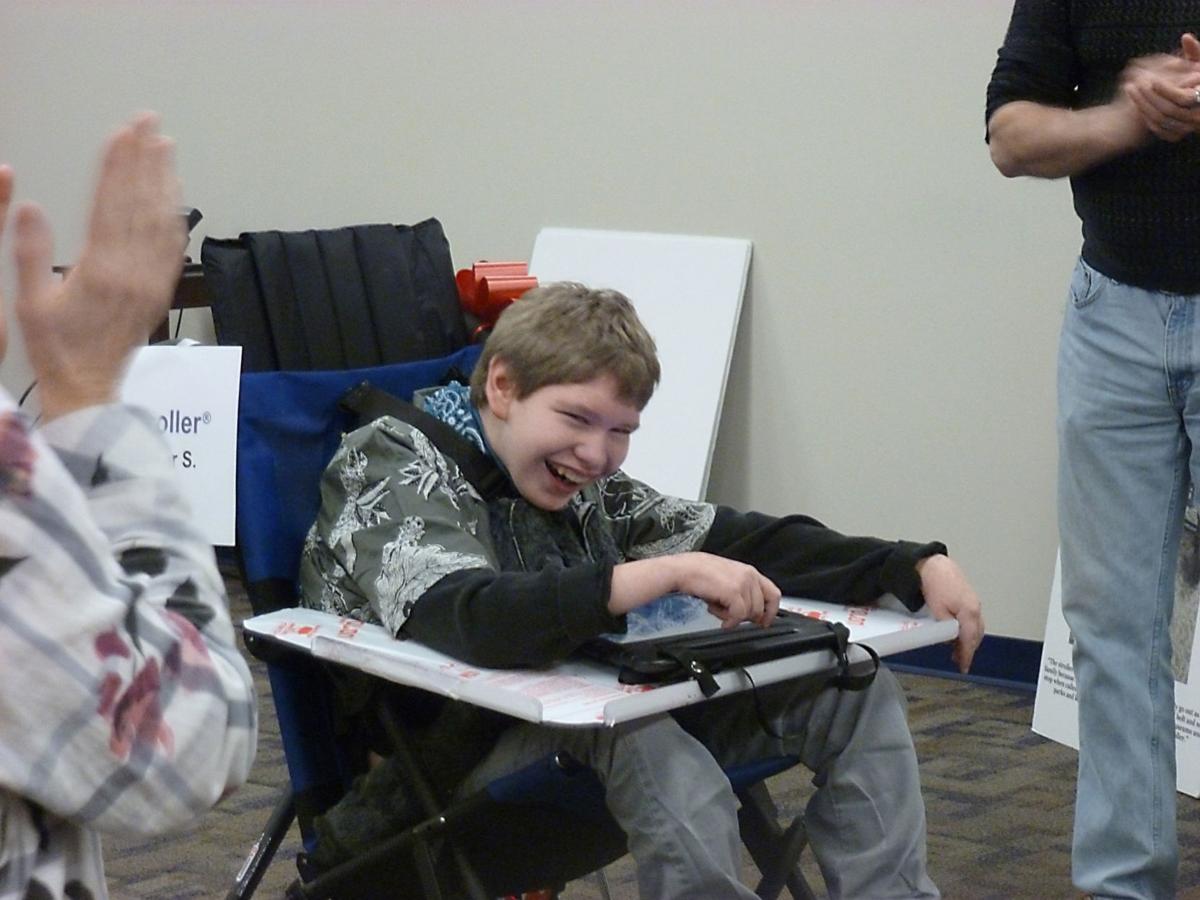 The crowd claps for Christofer Swedenhjelm after he received a new communication device and adaptive stroller Wednesday at the Seneca Highlands Intermediate Unit 9 office in Smethport, thanks to Variety-the Children’s Charity. 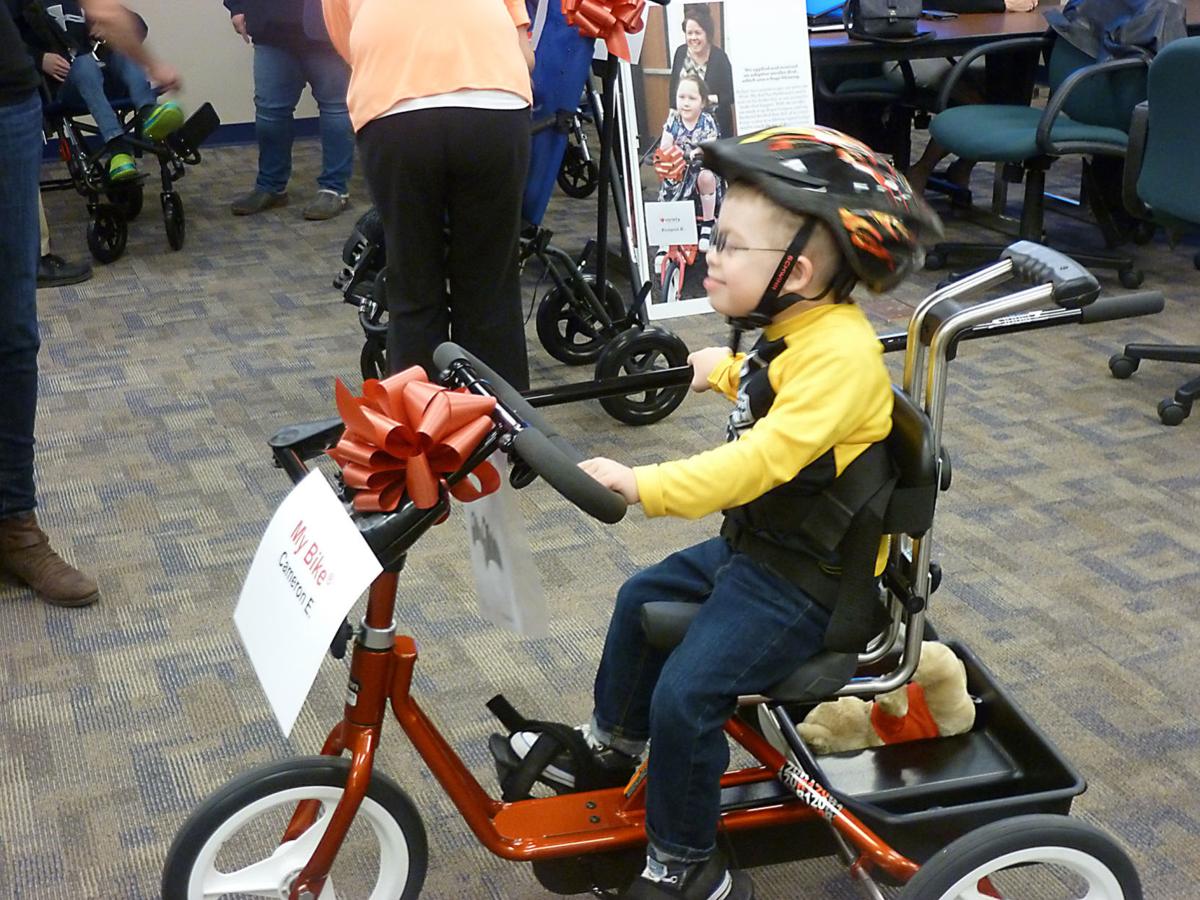 Cameron Ernst tries out his new adaptive bike, specially fitted for him, on Wednesday. He is one of several children from McKean, Potter and Elk counties who received adaptive equipment.

The crowd claps for Christofer Swedenhjelm after he received a new communication device and adaptive stroller Wednesday at the Seneca Highlands Intermediate Unit 9 office in Smethport, thanks to Variety-the Children’s Charity.

Cameron Ernst tries out his new adaptive bike, specially fitted for him, on Wednesday. He is one of several children from McKean, Potter and Elk counties who received adaptive equipment.

SMETHPORT — One piece of equipment can mean a world of difference to the family of a child with special needs.

On Wednesday, several local families received a chance to see that difference, as Variety-the Children’s Charity, distributed adaptive equipment free of charge to 13 children. The devices were given out at the Seneca Highlands Intermediate Unit 9 office in Smethport.

It was an emotional day for the families in attendance.

The purpose of Variety’s adaptive equipment programs are “To give kids the opportunity to live life to the fullest,” explained Charlie LaVallee, Variety CEO.

Variety has three such programs: the My Bike Program, the My Stroller program and the My Voice Program. The organization’s 71-county service area in Pennsylvania and West Virginia includes Cameron, Elk, McKean and Potter counties.

The organization provides adaptive equipment at no cost to families of children and youth with a mental, physical or sensory disability who live in the service area, are 3 through 21 years old and who meet the income guidelines. The income guidelines are designed so that middle income families are included, not just low income.

“This is an awesome experience,” said Shelly Carson, IU9 director of special education.

She explained that Variety brought 16 devices to 13 children, the most the organization has brought there at one time. This was the third or fourth time Variety has distributed at the IU9.

According to Carson, occupational, physical and speech therapists at the IU9 have been instrumental in helping area families apply for equipment and welcomed people to call for future assistance.

She said the physical therapists who helped measure and fit the children for their equipment were Angela Sorg, Becky Alborn and Alyssa Wennin.

On Wednesday, Variety made it easier for the IU9 to get communication devices — a tablet computer with programs that assist the user in communicating thoughts and feelings — in the hands of children who need them. The organization brought the agency one of the devices, with five different communication programs already installed, so the IU9 can let children try out the programs.

Previously, IU9 staff would have to go through Harrisburg to borrow a device just so a child can try it to see if it was a good fit. It was a long process.

During a presentation of devices, LaVallee asked Christofer — a boy who got a communication device that day, as well as a stroller — if he had anything to say.

Christofer, using his new voice that came out of his communication device, simply said, “Thank you.”

Christofer’s father, Randy Swedenhjelm said he thinks it’s “incredible,” explaining, “He will be able to say what he wants.”

The life-changing nature of such a device was evident when LaVallee related a story of a teacher telling a parent that the child told a story in school using one such device.

“I’ve never heard my daughter tell a story,” was the parent’s response.

LaVallee explained that in Pennsylvania, “Some kids only had a voice for 45 minutes a day because they had to share a device.” The available funding meant children could use a device for a portion of the day at school, but they couldn’t take it home to use with family.

Variety launched its My Voice program “to make sure every child has a voice 24/7.”

In fact, the organization has funded 1,000 communication devices and is seeking children who need them.

As for the strollers, which are much lighter and easier to travel with than wheelchairs, it means children can take part in family activities they might not otherwise have taken part in.

LaVallee shared a photo of a teenage boy and his brother who were able to swim in the ocean for the first time, thanks to the stroller. He would not have been able to traverse the beach in his wheelchair.

The strollers also make it easier for children to feel safe in a crowded place.

James Chapman is hopeful his son Liam, 4, who has autism, will be more comfortable moving around in public in the stroller.

He explained the biggest focus “is to get him out into the public,” as he is “very shy and very reluctant to be around a lot of people.”

As for the adaptive bikes, they provide exercise and physical therapy opportunities for children while giving them a chance to explore the outdoors with other children and their families.

Families who can use an adaptive device can apply online at the organization’s website, www.varietypittsburgh.org/applynow or call Variety at 724-933-0460.

“We’ve tried to make the process as simple as possible,” said LaVallee. “Let’s get the kids what they need so they can participate in life.”

LaVallee said families don’t necessarily have to choose between the three. Many who qualify receive more than one device.

Since 2012 — the year the first of the three programs, the My Bike Program formed, Variety has given away more than $5 million in adaptive equipment.

Donors can help at www.varietypittsburgh.org/donate/. The cost to sponsor an adaptive bike is $1,800; an adaptive stroller, $1,500; and a communication device, $1,200.

Cloudy early followed by heavy thunderstorms this afternoon. A few storms may be severe. High 77F. Winds SW at 10 to 20 mph. Chance of rain 90%.

Thunderstorms early, then partly cloudy after midnight. Low near 50F. Winds W at 5 to 10 mph. Chance of rain 90%.

Intervals of clouds and sunshine in the morning with more clouds for later in the day. Slight chance of a rain shower. High 64F. Winds W at 10 to 20 mph.