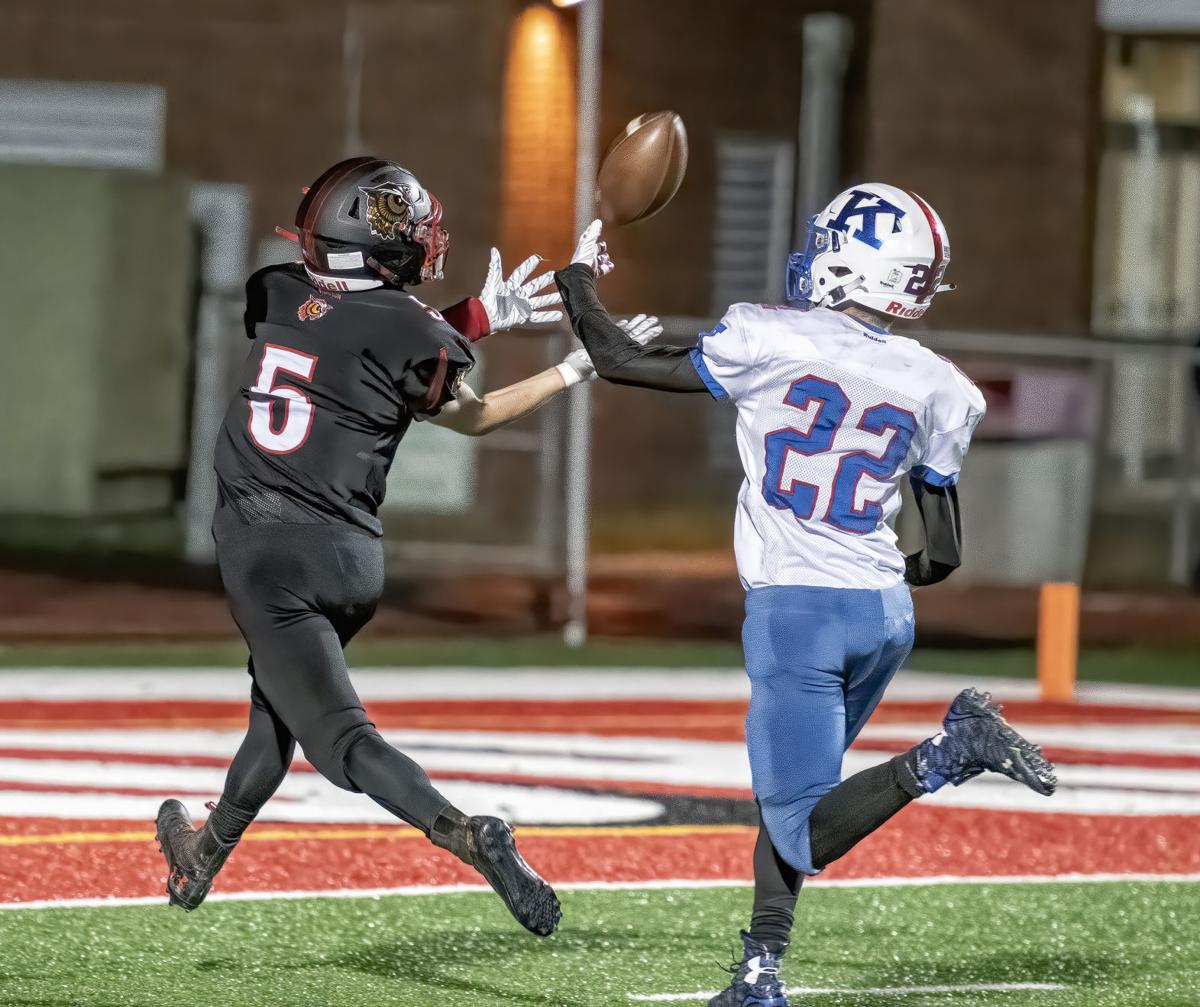 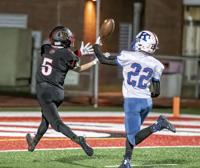 Bradford’s Jake Pattison (5) gets a step on Kane’s Shane Ackley to haul in a touchdown pass for the Owls. Kane won the game, 27-14. 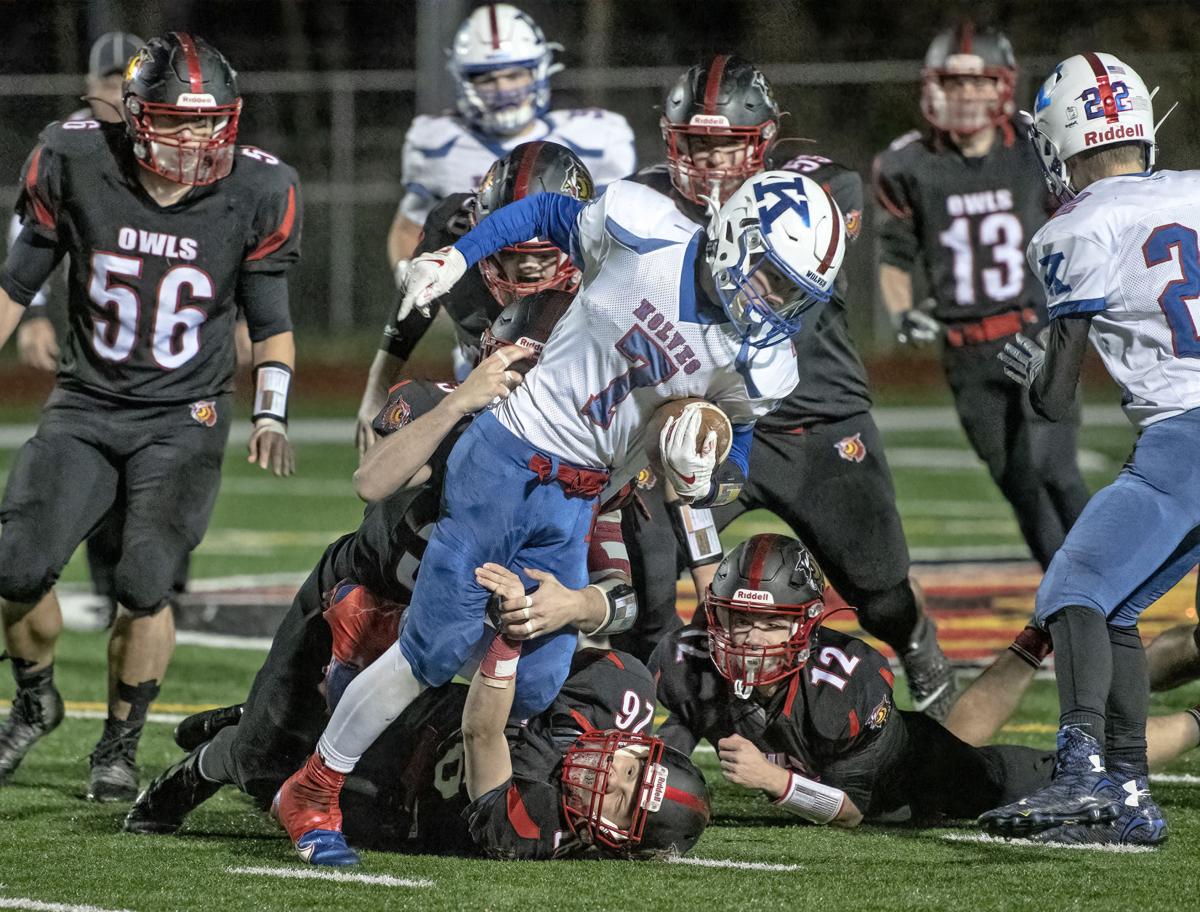 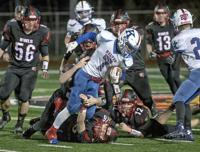 Kane’s Harley Morris is tackled by a group of Owls as he fights for extra yards. The Wolves won 27-14.

Bradford’s Jake Pattison (5) gets a step on Kane’s Shane Ackley to haul in a touchdown pass for the Owls. Kane won the game, 27-14.

Kane’s Harley Morris is tackled by a group of Owls as he fights for extra yards. The Wolves won 27-14.

It wasn’t the 51-7 blowout during Week 3, but Friday night’s matchup between Bradford and Kane at Parkway Field had the same end result.

Kane quarterback Zuke Smith and the Wolves (2-3) edged the Owls by a score of 27-14 behind his 230 passing yards and three touchdowns on Bradford’s homecoming and Senior Night. Smith also added 48 rushing yards on 15 carries and each of his three touchdown passes were to different receivers.

For Bradford, quarterback Austen Davis completed 11 of his 29 passes for 111 yards and a touchdown and interception. He also was the team’s leading rusher with 83 yards on the ground and a score.

Friday marked the second straight game in which Bradford didn’t fall victim to the running clock rule. Last week, the Owls (0-5) narrowly lost to Ridgway by a score of 28-21 after previously falling to the Elkers, 45-14, earlier this season.

A slow start in the first half for Bradford led Kane to taking a 21-7 halftime lead Friday night, but the Owls managed to close the gap to one score in the second half before a 67-yard touchdown pass from Smith to running back Josh Buhl and defensive stops sealed the win for the Wolves.

“We won the second half,” Bradford head coach Jeff Puglio said. “We came out, we did what we needed to do in the second half, we just didn’t make enough plays in the first half. I think we left points on the field again. (We had a) couple mental breakdowns on defense again and it’s just we’re closing the gap, but we’re just not there yet.”

“Bradford’s really improved over the last couple of weeks,” Kane head coach Jim Hillman said. “They have a lot to be proud of…They worked hard to get back to where they were and we knew watching them against Ridgway how much better they were and we were going to be in a dogfight and it was certainly a dogfight.”

Kane received to start the game and marched 70 yards down the field to take an early 7-0 lead after a five-yard touchdown pass from Smith to Shane Ackley.

On the ensuing possession, Ackley picked off a Davis pass which set the Wolves up at Bradford’s 30-yard line with 5:45 left to go in the first quarter. However, the Owls’ defense was able to rise to the occasion and forced a turnover on downs.

Kane nearly intercepted another pass on Bradford’s next offensive drive, but took advantage after they forced the Owls to punt.

A 20-yard touchdown pass from Smith to Ricky Zampogna on 3rd-and-10 and the last play of the first quarter would extend the Wolves’ lead to 14-0.

“Two touchdowns in the first half, he just threw lasers. Sometimes the guy just throws a really good ball,” Puglio said of Smith. "And Zuke did that tonight. Credit all to him and his ability because we had him running and on the move, he made some really nice plays.”

The Owls didn’t back down and would get on the board with a 32-yard touchdown pass from Davis to Jake Pattison on their next drive — a drive in which they converted on a 4th-and-1.

On the ensuing drive, Kane’s offense faced a 3rd-and-18 and picked up 17 yards with a pass from Smith to Zampogna and managed to convert on 4th-and-1 as well. That was followed by a 21-yard touchdown rush by Buhl which put the Wolves up, 21-7, at halftime.

Puglio’s message to his team at halftime was to slow the game down and stop trying to make perfect plays.

“We try to be so perfect all the time that we forget just to play football,” Puglio said. “When we just go out and cut loose, we’re pretty good and we can do that, but if we’re going to try and be perfect every single play and make perfect plays and perfect reads and perfect coverages, it’s just not going to happen and it doesn’t happen for anybody.”

The Bradford offense came out with some fire and drove down to Kane’s 40-yard line on the opening drive of the second half, but turned it over on downs.

On Kane’s next offensive possession, Smith rushed for a 45-yard touchdown, but it was called back.

After punts from both teams, the Bradford defense forced another turnover on downs which would later turn into a 15-yard touchdown rush from Davis to cut the Kane lead down to 21-14 with 10:41 left to play.

But another touchdown on a 3rd-and-long for Kane on its next offensive drive would settle the score as Smith threw a short pass to Buhl, who dashed his way up the sideline for a 67-yard touchdown, putting the Wolves ahead, 27-14.

“There’s no quit in these kids and that’s what makes us so proud of them,” Hillman said. “Playing teams like Ridgway, St. Marys in our losses, these guys never quit fighting and they continue to fight.”

Bradford ended up punting on its next offensive possession and even after Elijah Fitton intercepted Smith in the end zone, the Owls weren’t able to rally for a comeback win.

While the District 9 playoffs get under way next week, Bradford prepares to face Port Allegany on the road, while Kane hosts Otto-Eldred.

“We’ll get into practice Monday and fix the things we need to from tonight,” Puglio said. “But all eyes (are) on Port Allegany.”