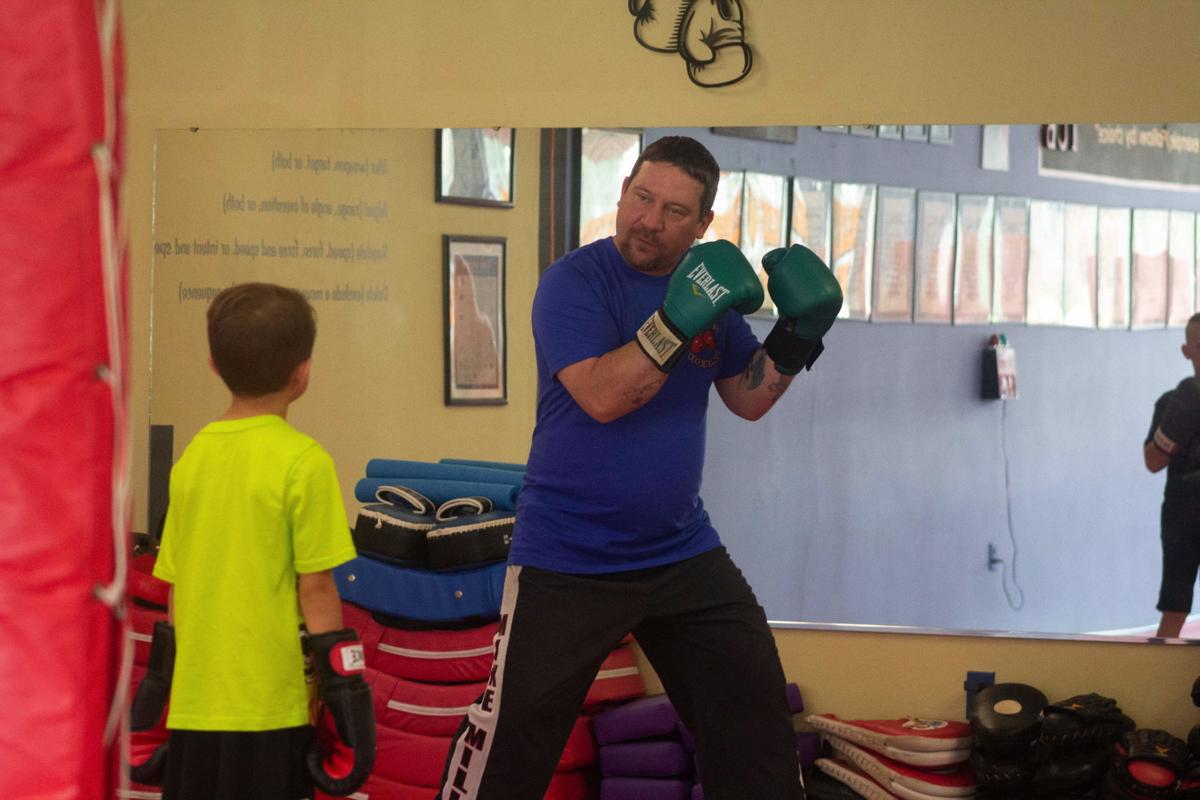 Michael Miller, a former amateur boxer and fifth degree black belt in American Kenpo karate, instructs students in a youth boxing class at Miller’s Dojo on East Main Street. Miller, a Bradford native, has been teaching boxing, Kenpo, kickboxing and more at the location since 2005. 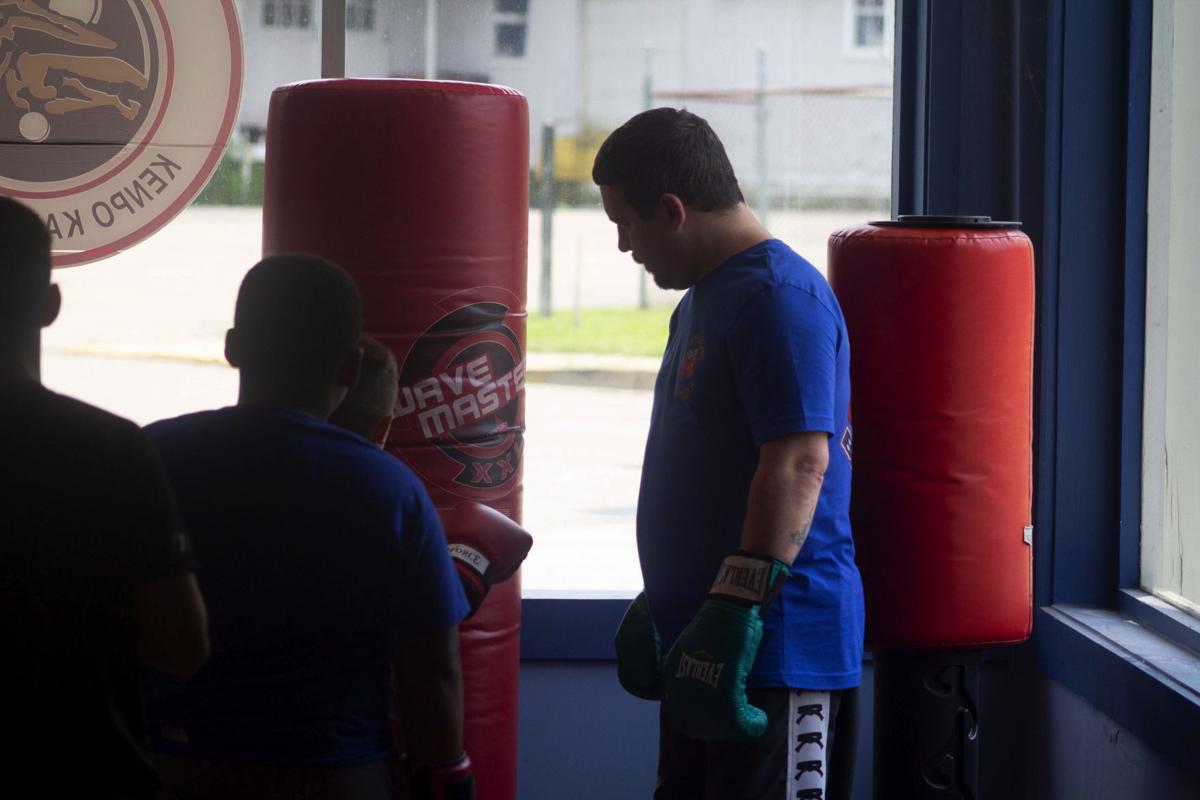 Michael Miller, a former amateur boxer and fifth degree black belt in American Kenpo karate, instructs students in a youth boxing class at Miller’s Dojo on East Main Street. Miller, a Bradford native, has been teaching boxing, Kenpo, kickboxing and more at the location since 2005.

The former amateur boxer has hosted an array of classes since opening Miller’s Dojo on East Main Street in 2005. This summer, however, Miller has expanded his teaching arsenal even further.

“What you saw today was the very first time I’ve thrown a boxing camp for kids,” Miller said after Thursday’s session of his seven-week, bi-weekly youth boxing program. “Any other time a child wants to learn boxing, we have to do it one-on-one.”

Nearly two-dozen children of varying ages followed Miller as he led them through boxing techniques, both offensive and defensive, before the kids took their aim at a set of punching bags.

While Miller now spends his time teaching boxing, kickboxing and American Kenpo karate to students of varying ages, his martial arts career dates back to before the turn of the millennium.

This discipline, which was developed by Ed Parker in the 1950s, can be thought of as a hybrid martial arts discipline, most closely associated with karate.

“It’s a mix between the soft and the hard,” Miller said. “Traditional karate is a hard system, which is linear. Kung fu systems are soft styles, which are very circular. (Parker) took both and put them together, along with judo, jiu jitsu, boxing, and he kind of put it together and formed his own system.”

By the time Miller started college at Pitt-Bradford in the fall of 1997, he was already a third degree black belt in Kenpo. Upon ceasing training with his instructor once he went to college, however, Miller decided that teaching would be a good way to help him stay active.

“I drew up a flyer asking if anyone wanted to learn karate,” Miller said.

He got about eight participants with whom he trained at the college wherever he could find room.

After the Kenpo school that Miller had formerly trained at closed, however, he began to connect with some of the world’s best in the discipline. He recalled flying to Florida several times each year to train with a partner, who would return the trips to train in Bradford, as well.

While Miller began to immerse himself further into the world of Kenpo, another opportunity presented itself.

“There was a local boxing club that got started back then,” Miller said. “It was kind of a ‘right place, right time’ kind of thing. I would have never boxed had it not been here.”

Doug Barhight, a former professional boxer who hailed from the Poconos, started the club in Bradford. When Miller decided to pursue an amateur career, Barhight became his head coach.

“There were a couple people who were actively boxing here,” Miller said. “That’s when I came on board and started training with them.”

Miller’s first organized fight took place in February of 1998 at Aiello’s Cafe in Ridgway. The ninth fight on a 12-fight card, Miller won by unanimous decision in front of a crowd, about 600 strong, that had crammed into the building.

Unfortunately, after a string of cancelations, the victory in Ridgway would be Miller’s final amateur fight.

“They would put me on a card, then it would get canceled,” Miller said. “When you’re boxing, you’re training your butt off if you’re fighting. I was jogging 3-5 miles a day, sprinting, weightlifting, bag work, and doing a lot of sparring.”

Miller’s second fight was called off after his opponent backed out the week of the fight. Another, set to take place at the Bradford High gymnasium, fell through.

Miller had then planned to fight in a Golden Gloves competition until his manager canceled at the last minute to assist his sick mother.

“I got kind of frustrated,” Miller said. “I’m working my butt off, on a strict diet, and I’m not fighting.”

Miller received his passbook from the United States Amateur Boxing Federation, a tool the governing body uses to keep track of organized fights.

“Nothing happens unless it’s in that passbook,” Miller said. “I’ve got my book, but it’s got one fight in it.”

After graduating from Pitt-Bradford in 2002 and seeing his in-ring career come to an end, Miller turned back to teaching.

He continued to train in Kenpo under Dave Hebler, his current instructor, who was the fifth martial artist to receive a black belt in Kenpo from Parker. Hebler, regarded as an elder statesman in the Kenpo world, once served as a personal bodyguard for Elvis Presley in the musician’s “Memphis Mafia.”

“(Hebler) is 82 years old and he’s in better shape than me,” Miller said. “He protected Elvis for four years, and was actually Elvis’ karate instructor when he was with him. Elvis loved karate.”

Now, Miller is a fifth degree black belt in Kenpo.

After a few years of teaching martial arts wherever he could find space around Bradford, Miller moved into his current building in April 2005 and has been teaching there full time since May 2006.

“The only way to succeed is sticking with what works while manipulating some things and changing things up,” Miller said. “I’ve had kickboxing programs at times, I’ve had jiu jitsu programs, but everything was for adults.”

Miller recently started to market toward kids, a response to an increase in general interest he’s received over the past year.

“I’ve had so many people contacting me wanting to know if I teach boxing,” Miller said. “And yeah, I do, but only privately. I had so many people that I thought to myself, I’m going to do a summer boxing camp this year, thinking I would get several (kids). And I got 22.”

Miller spends the majority of his days teaching private boxing and kickboxing sessions, mostly with adults, before his evenings give way to Kenpo lessons.

““I’ve started marketing to kids because that’s what’s keeping the doors open,” Miller said. “Boxing is something that people are really interested in, and the fact that I’m qualified to do it.”

The youth summer camp, which will run for five more weeks, is the first of its kind for Miller. It likely won’t be the last, however, as he plans to start an ongoing boxing program for kids that could start as soon as September.

“Kids need stuff to do,” Miller said. “And this is great for them.”