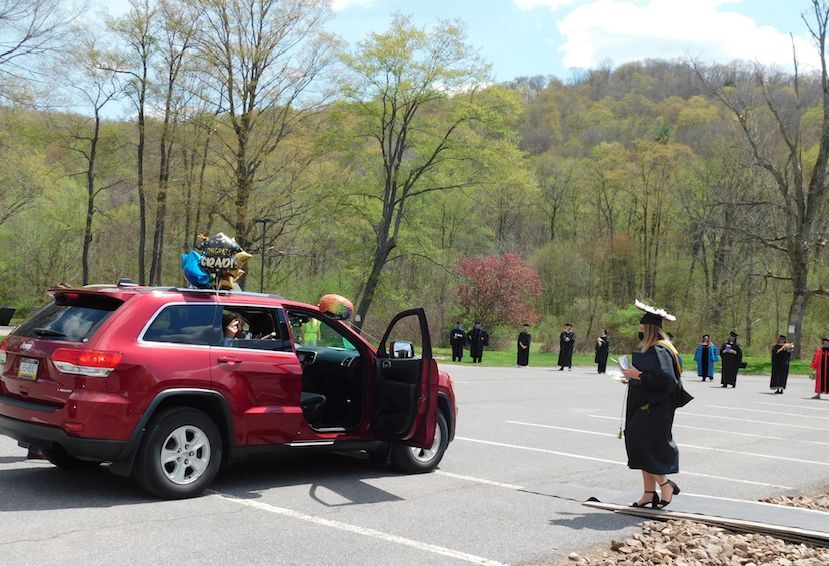 Cheyenne Sorochman walks to her family’s vehicle after receiving her diploma during Sunday’s commencement ceremony at the University of Pittsburgh at Bradford. 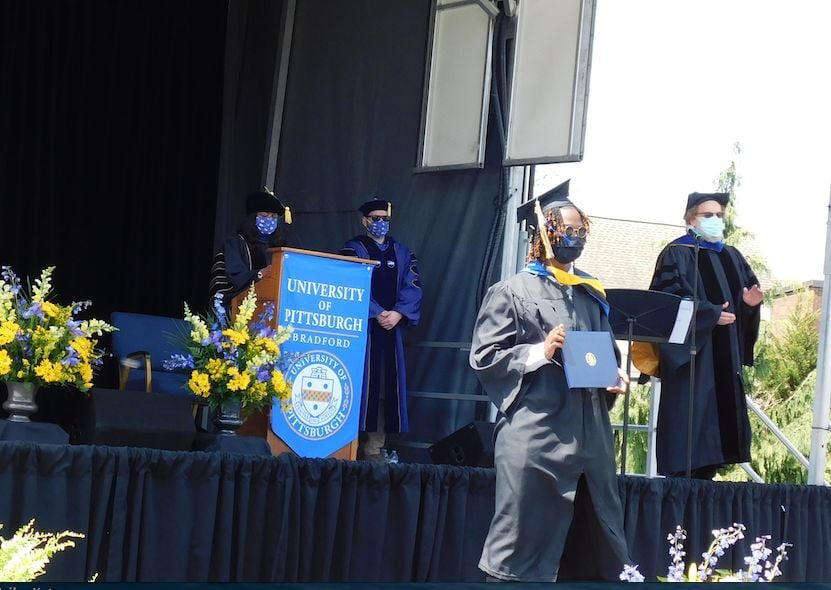 University of Pittsburgh at Bradford graduate Kamal Jamison poses with his diploma onstage while others took his picture during Sunday’s outdoor commencement. 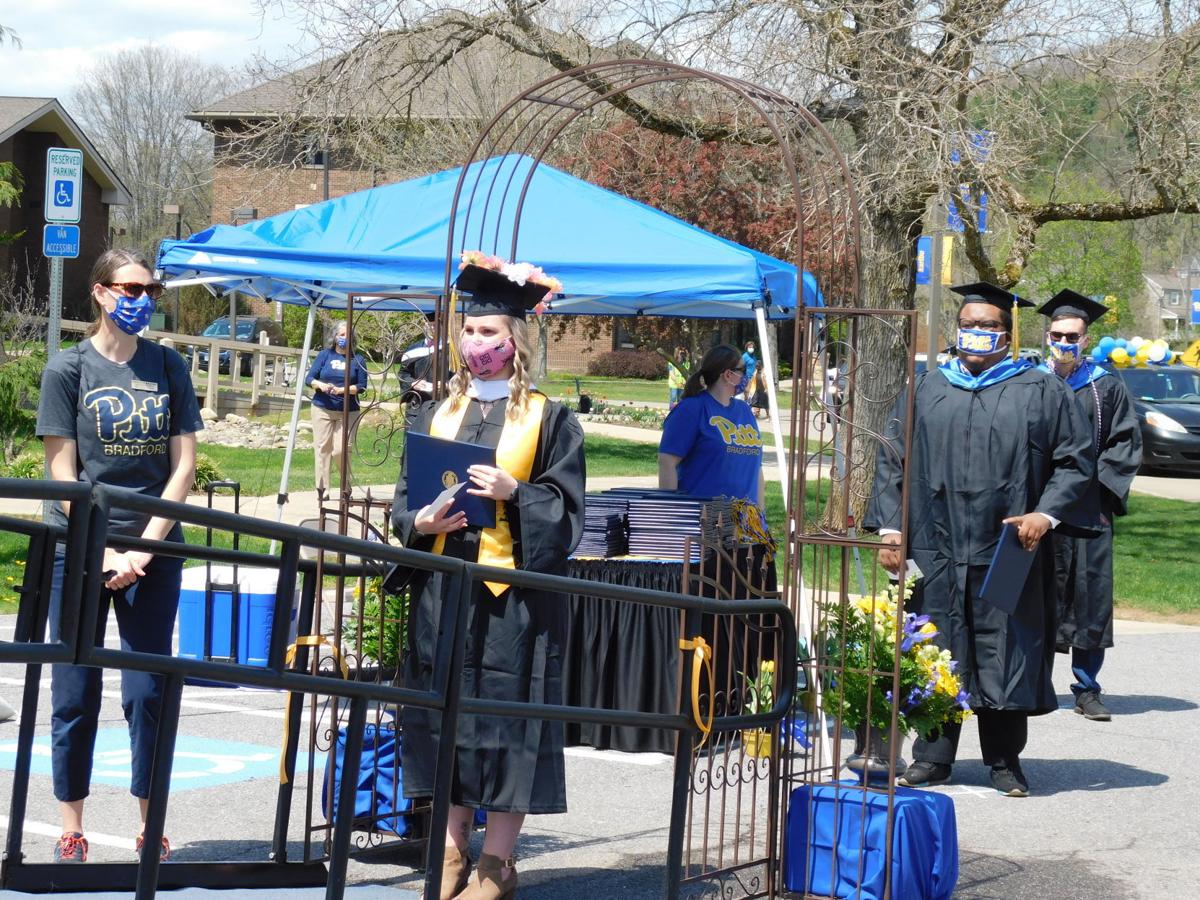 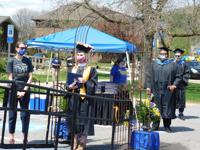 University of Pittsburgh at Bradford graduates wait in line to walk up to the outdoor stage Sunday to receive their diplomas during Sunday’s outside drive-through commencement.

Cheyenne Sorochman walks to her family’s vehicle after receiving her diploma during Sunday’s commencement ceremony at the University of Pittsburgh at Bradford.

University of Pittsburgh at Bradford graduate Kamal Jamison poses with his diploma onstage while others took his picture during Sunday’s outdoor commencement.

University of Pittsburgh at Bradford graduates wait in line to walk up to the outdoor stage Sunday to receive their diplomas during Sunday’s outside drive-through commencement.

Blue skies, sunshine and warm temperatures greeted the class of 2021 graduates Sunday during the outside, drive-through commencement at the University of Pittsburgh at Bradford.

The event, which provided 263 diplomas to graduates, held the same jovial spirit found at past indoor ceremonies. This was seen with families shouting praise from their vehicles to graduates onstage. One young man sprawled out of a van window and taking pictures was heard yelling, “That’s my sister!”

Pitt-Bradford President Dr. Catherine Koverola addressed graduates at the event, who included December 2019 and 2020 graduates who wanted to receive recognition for their achievement, but weren’t able to previously because of the pandemic. During the ceremony, graduates rode with their families up to the stage area, got out of the vehicle and walked across the stage to receive their diploma and have their pictures taken by family. Afterwards they received gifts from Pitt-Bradford before rejoining their families in their vehicles.

She said each graduate would pass through the “Gates of Knowledge” which are symbolic of the graduates acquiring the knowledge to master their chosen academic disciplines.

Koverola told the graduates that what has made achieving the goal of earning their degrees remarkable is that they did it “in a once-in-a-lifetime pandemic.”

“This required so much more of you,” she continued, noting the students had to adjust and learn how to accomplish their tasks through online work and classes, as needed, over the past year.

“You used more digital tools to stay connected with family and friends,” she added.

“All of these pandemic-related skills will serve you well in your life’s work” and a new environment, Koverola stated.

Students and families who commented on their gratitude for the in-person ceremony included Matt O’Brien of Bradford, an environmental studies major, and his parents, Mark and Sue O’Brien.

“At least they’re doing something,” Mark O’Brien said of the ceremony. “The kids in this pandemic have missed the prom (and other notable events.) I feel bad for the kids, and they only get to do this once.”

At another family gathering, Michael Penfield, 11, of St. Marys was found taking a picture of his mother, Tiffany Minor, and her fellow criminal justice graduates. Michael said he wished the ceremony could have been traditional, but was glad his mother could participate in an in-person ceremony.

Tiffany’s mother, Tina, said her daughter actually graduated in December, but wanted to return for the formal ceremony.

“She’s a non-traditional student, so this is a big deal,” Tina Minor said of her daughter. “She graduated with her bachelor’s and she’s already started on her master’s. She’s also working in her career field.”

Another graduate, Dominick Giannini of Warren, was at the event with his parents Rick and Carin Giannini. Dominick Giannini, who has a double major in history and political science and international affairs, said he was able to study online, but stayed at the campus this year. Rick and Carin Giannini said they didn’t mind the drive-through ceremony, and were happy the university could orchestrate the event.

“This is nice,” Rick Giannini said from the comfort of his vehicle.”It’s a nice graduation — jump out, run up and get the diploma.”