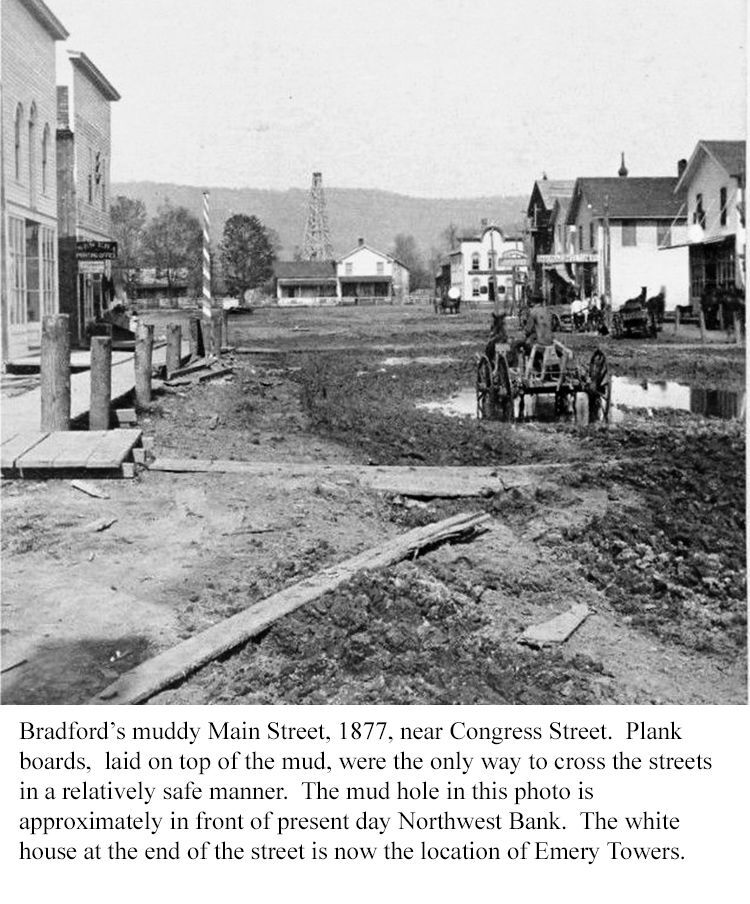 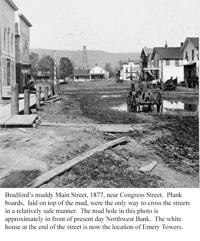 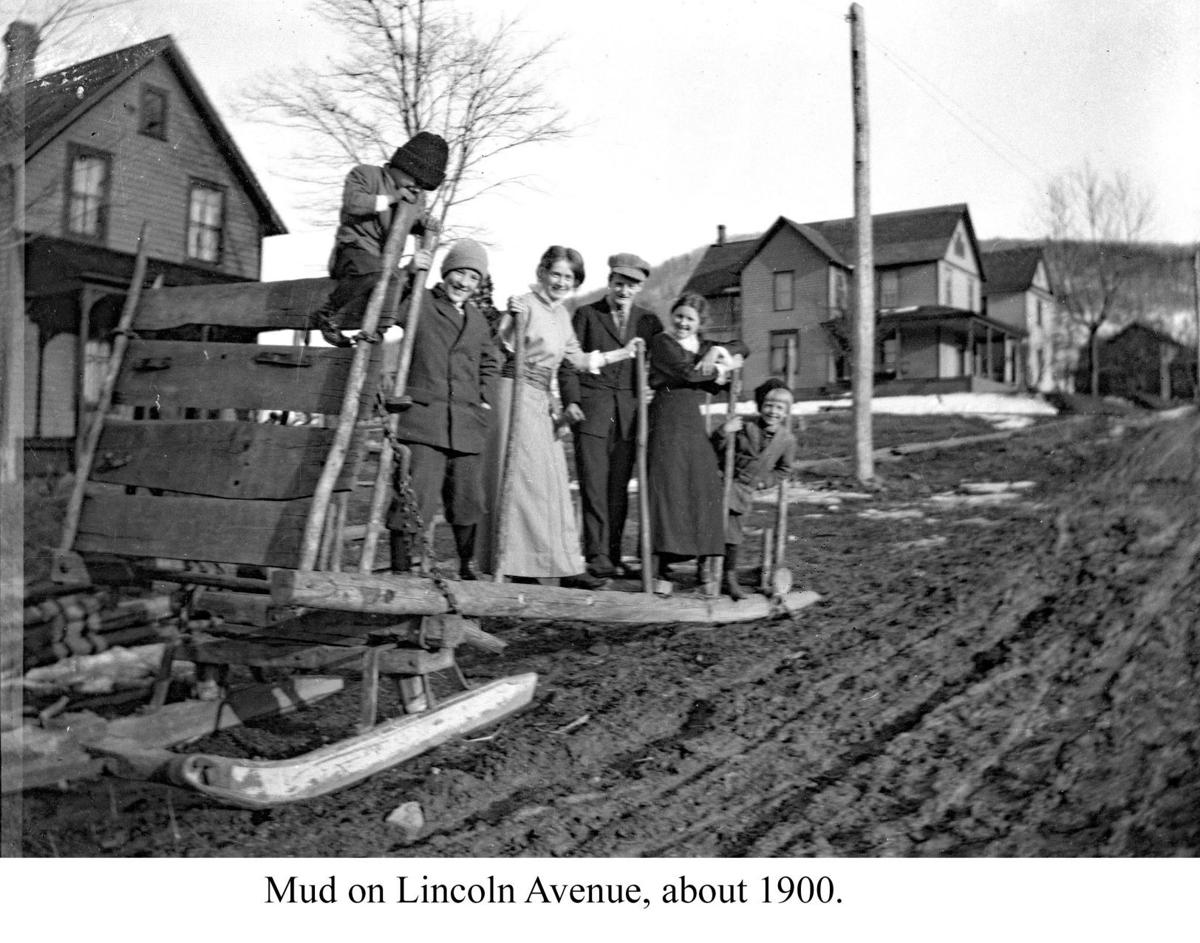 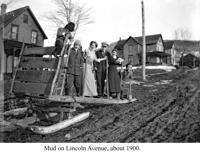 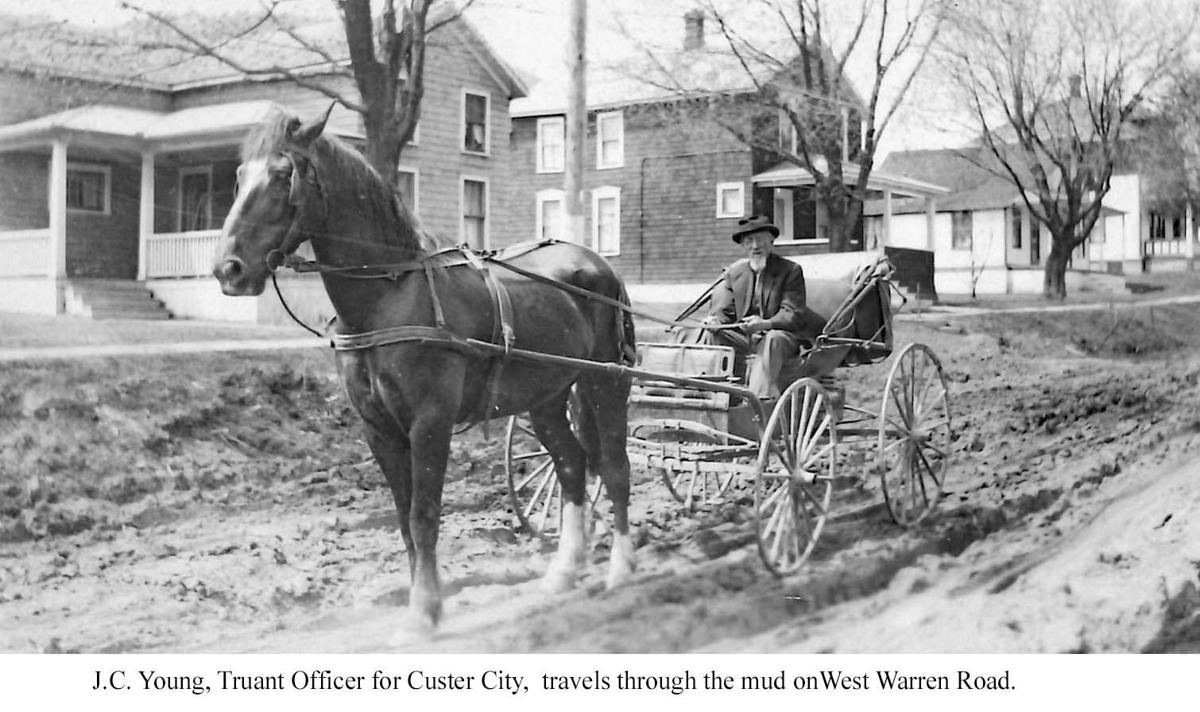 An old joke goes this way: A traveler comes upon a man, buried in mud up to his neck. He hollers to the man “Are you alright? How can I help?” “Forget about me” shouts the man, “it’s my horse underneath me that needs saving.”

He might have been talking about Bradford in the 1870s and 1880s, when the unpaved streets of Bradford were notorious for mud holes. And we are talking deep, deep mud holes.

The soil in this region is formed from shale and sandstone. Add a wet spring, a booming oil industry, and an increasing number of teamsters with horse drawn wagons hauling equipment to the drill sites, people on horseback, buggies, carriages, and even stagecoaches (electric trolleys don’t appear until 1897) and conditions for mud are ideal.

Back in the day, Bradford had quite a reputation, not only as the oil mecca of northwest Pennsylvania, but as the metropolis of mud. The Elmira Advisor snidely commented that “the mud is so deep in Bradford that it is expected every day that the horses’ legs will strike the third sand.” The Titusville Herald wrote “Bradford swims in mud and abounds in pestilential filth.” The McKean County Miner said that “it would take the boots off your feet if they were not padlocked on at the knees.” The Warren Mail said “In Bradford, the mud is so deep that they navigate the streets with boats, instead of wagons. To be sure, the town needs draining – or bailing out.”

A visitor from Buffalo observed “mud in the oil country attains a depth that is unknown in any other country. If the depth of mud could be measured by the curses of the people that wallow in it, I don’t know but what it would be about a hundred feet deep in places. Mud and oil are Bradford’s glory.”

And in 1881 American Humorist and Journalist Eli Perkins visited the city and declared “Mud is mud, and they say you can’t make it any muddier. But go to Bradford, and you’ll change your mind!”

Reports of people falling in mud were common but were often viewed with mirth. One woman, walking on High Street, sank down two feet in a mud hole and had to be rescued. The Era wrote “she almost died a mud-erous death.” A tall man, allegedly full of drink, fell face first into a mud hole at the lower end of Main Street, and “emerged from the semi-liquid mass like a Hindu idol to the unspeakable delight of the crowd.” A theatrical troupe failed to appear at the Wagner Opera house as expected; rumor spread that the entire troupe and baggage had fallen into a Main Street mud hole on their way through town and were never seen again.

It was said “to say that Main Street is in terrible condition and impassable would almost tell the truth.”

The worst mud hole in the city was at the intersection of Main Street and Webster Street and the Bradford Era abounds with stories of those unfortunate enough to encounter this quagmire.

One such incident happened in March of 1878, a particularly soggy spring that caused the mud hole to become even deeper. The Era facetiously reported “Our first circus came yesterday afternoon, as a great crowd assembled at the lower end of Main Street to witness the frantic exertions of the United States Express Company’s driver in trying to urge his horses to pull a wagon loaded with goods out of a mud hole. The hole was three feet deep and all the hard names that could be launched upon the poor horses had no effect. Even when a relay of fresh horses was put in the traces, the wagon could not be stirred.

Right in the middle of this excitement, a horse and rider came down the street and started through the mud at what seemed to be a safe walk, but the mud won out, and down went the horse, burying the man beneath it. He managed to free himself, covered in mud. Next, came a wagon load of lumber, drawn by two horses, and when it reached the mud hole, one of the horses also fell into the pit. This horse seemed to be completely used up, and some men carefully waded out through the mud and unharnessed the horse. They tried to get him to his feet, but the horse refused their help. Finally, a chain was attached to his collar, and he was dragged out of the mud by another horse on dry land, where bystanders boosted the horse up to its feet.

Meanwhile, a patronizing crowd of men which numbered in the hundreds, stood on the nearby wooden plank sidewalk, throwing out useful suggestions as the scene unfolded but all laughter stopped when the plank walk collapsed under the weight of this human mass, throwing them into the mud hole as well.

It would take all the ministers in Christendom to negotiate for the reparations of the swear words that were uttered in this short, exciting hour.”

Plank sidewalks were usually pretty sturdy, though, and didn’t normally collapse. A notice dated July 8, 1878, advised that each plank walk must be no less than five feet in width, 2 inches in thickness, with stringers four inches square. Such sidewalks were found in every town and village in the area and provided a somewhat stable walkway for pedestrians to avoid the dreaded mud holes.

That same year, a man named Charles Larabee, riding through Derrick City, spied an enormous mud hole and taking quick action to avoid the mud urged his horse onto one of these plank sidewalks in front of a local store. Seeing this, the store owner became outraged at this audacity and, running out of his building, swore loudly at Larabee and his horse. In his hand he carried an iron rod and promised to use it unless both horse and rider immediately got off his sidewalk.

Larabee, however, was determined to circumnavigate that mud hole. He pulled a pistol out, and declared “I’ll shoot any man that stops me.”

The newspaper later reported “After calling each other all the names that wicked man ever invented, the men cooled off, and Larabee departed.”

And mud wasn’t just in Bradford. In the spring of 1878, all the roads leading to Duke Center, for example, were abandoned due to the depth of mud. Mail delivery — on horseback, of course — to that part of the county was cancelled. And teamsters swore that they had never seen such mud in the vicinity of Knapps Creek.

Sunshine finally came and dried up the mud. One local sage quipped “the mud in Bradford is drying up and there has not been a horse, nor a man drowned this season.”

Eventually, Main Street was paved, first with cobblestone, then with brick, and finally with macadam. Mud hole horrors became a thing of the past. Now we only contend with potholes!