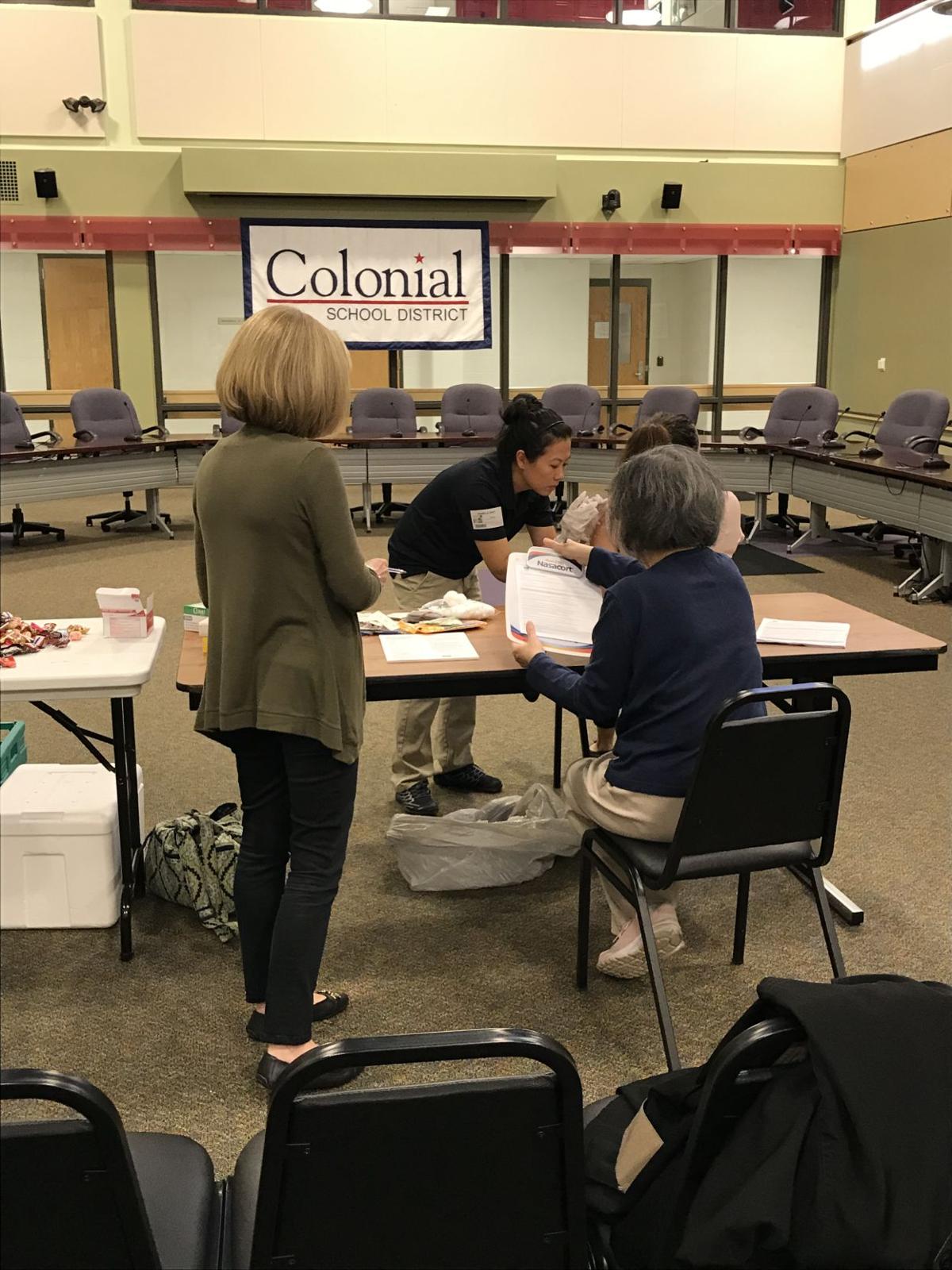 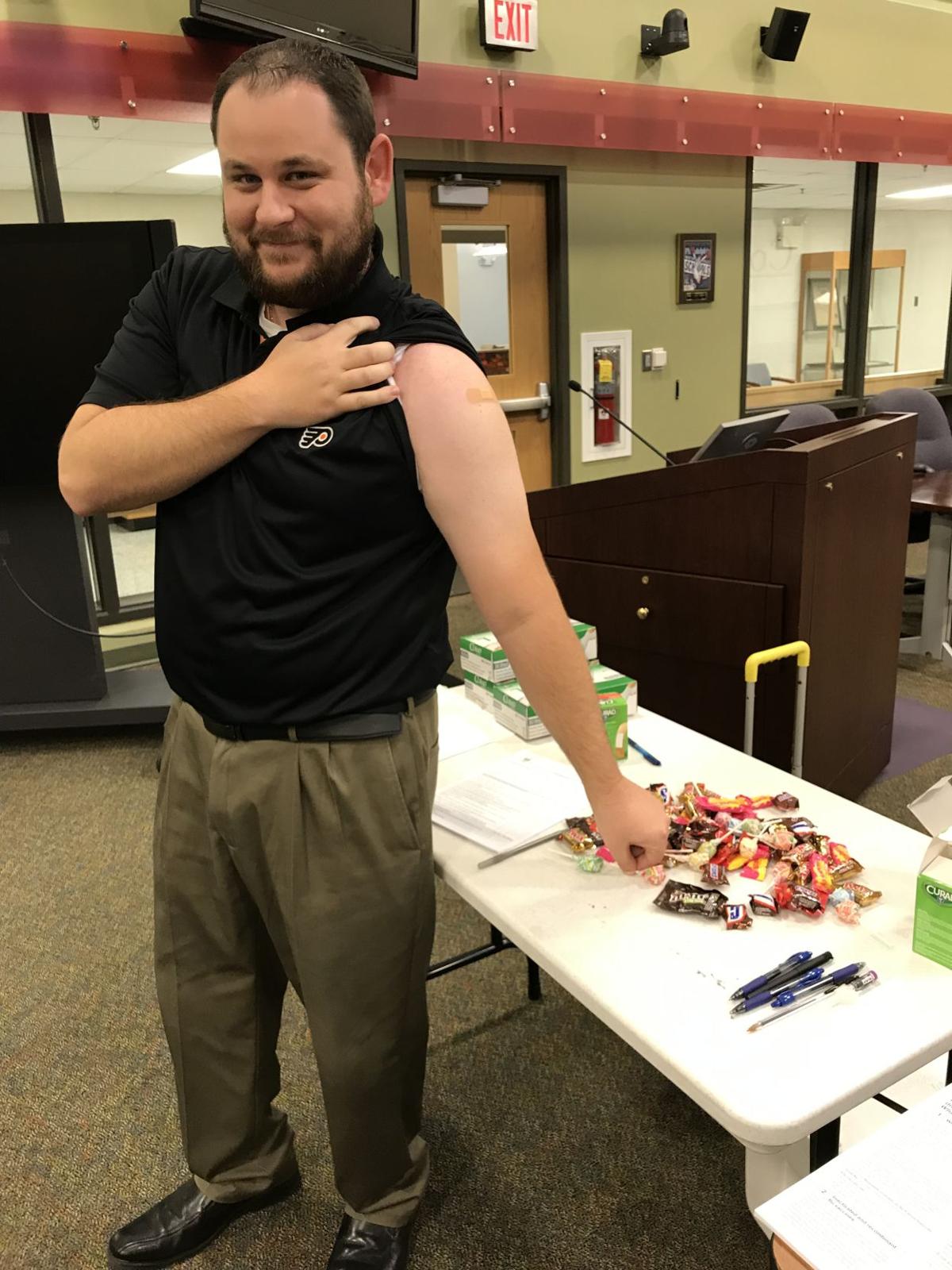 Scott Fancik, Database Coordinator in Colonial School District, shows off his vaccination arm with a smile. 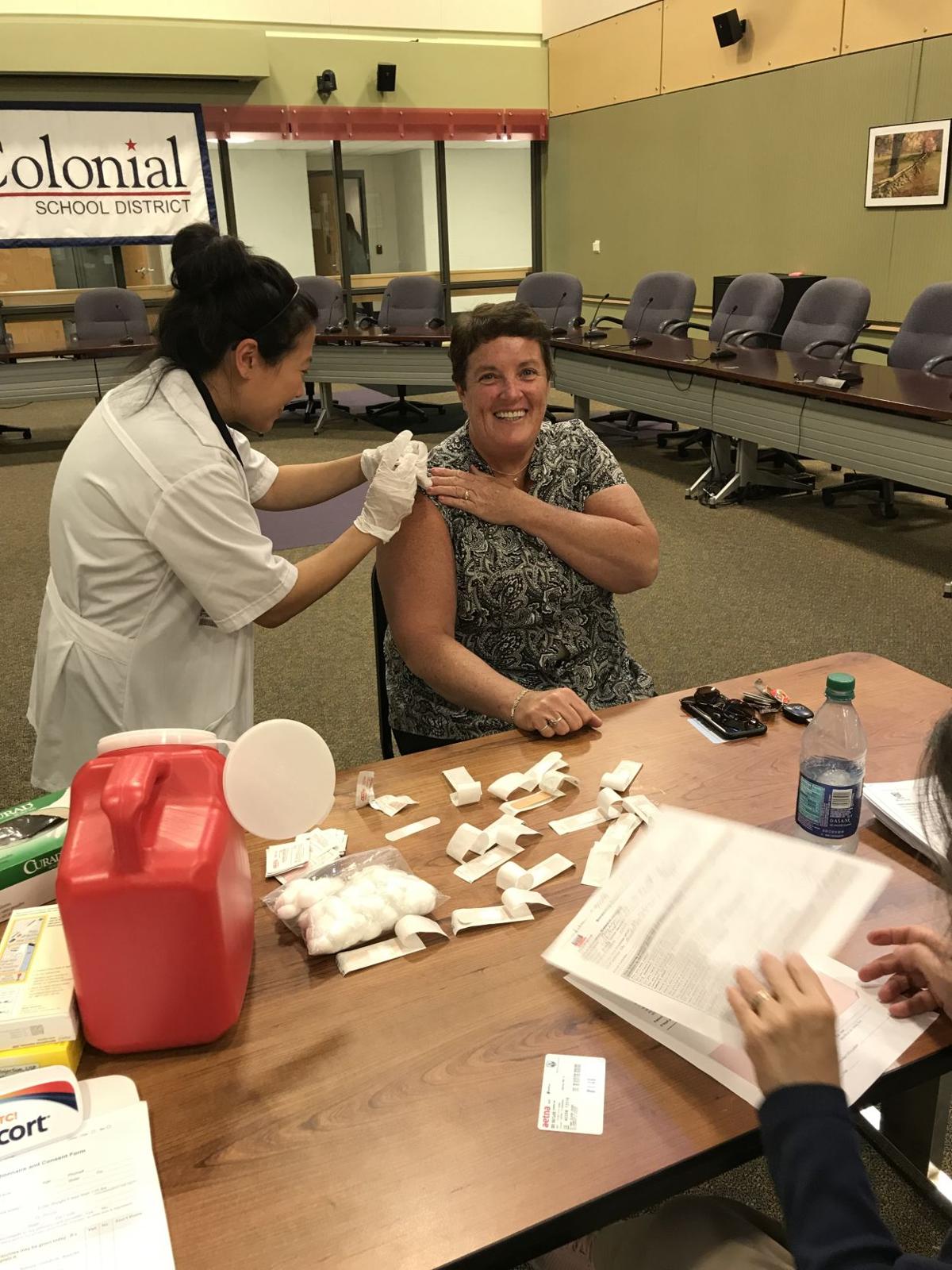 Mary Thiess, Executive Secretary at Colonial School District, is happy to get her flu shot at a clinic held at the district office.

Scott Fancik, Database Coordinator in Colonial School District, shows off his vaccination arm with a smile.

Mary Thiess, Executive Secretary at Colonial School District, is happy to get her flu shot at a clinic held at the district office.

Your life is busy. Work, appointments, grocery shopping, cooking, driving your kids around – there are all sorts of excuses to put off getting an annual influenza (flu) vaccine. To make it easier for its employees to get their flu shot, Colonial School District holds an annual flu shot clinic at its Central District Office. This is the fifth year the district has held its clinic on Oct. 21.

Taking time to get a flu shot every year may feel like a hassle but getting sick is even worse. According to the Centers for Disease Control (CDC), getting the flu can be a serious concern, particularly among young children, older adults, and people with certain chronic health conditions. Moreover, the flu infection puts even normally healthy children and adults at risk of serious complications, hospitalization, and even death.

Children are particularly vulnerable, which is why, if you work in a school district, it is especially important that you get your annual vaccine.

“The flu vaccination is already covered under our health plan,” says Colleen Techtmann, benefits and support staff manager for Colonial School District. “People can get it at a doctor’s office, pharmacies, or here. We offer it for convenience,” she adds.

Got a Few Minutes?

The clinic was held from 2 to 5 p.m., a window chosen specifically to accommodate the greatest number of staff members. High school staff tends to finish a little earlier and elementary ends a bit later within this window. The custodial staff has a shift change during this time so employees can come at the end or beginning of their shift. Bus drivers have time before leaving for their routes. The staggered nature of employee’s work obligations resulted in a consistent trickle.

“There was never a huge line. It took about two minutes,” says Techtmann.

Two pharmacists from Rite Aid administered the shots. Employees had to fill out a form, which was emailed ahead of time.

There were about 70 staff members who took advantage of the clinic’s ease and accessibility.

“I had emailed out information about the clinic and words spread. Seventy doesn’t sound large, but many people said they had already received it,” reports Techtmann.

Techtmann has noticed that the percentage of staff members getting the flu shot has increased over the years. She attributes it to a combination of the flu becoming both more common and worse. A person will see a colleague with the flu, which motivates both to get the shot next year.

A larger number of vaccinated employees translates to a healthier workforce. Absenteeism is reduced, which is beneficial to employees and less disruptive to students. It also reduces health care spending on flu-related claims, which may help keep premiums down.

Techtmann, along with many other administrators, gets her flu shot at the clinic.

“I hear people talking about getting their flu shot. Years ago, I didn’t hear people having these discussions. You get the flu shot to protect not only yourself but those around you,” says Techtmann.

If you missed the flu shot at your school, don’t worry. You can still get your shot in a timely manner at a convenient location with zero out-of-pocket costs. Just go to nearly any pharmacy, including pharmacies in grocery stores, Target and Walmart stores and bring your health ID card with you.