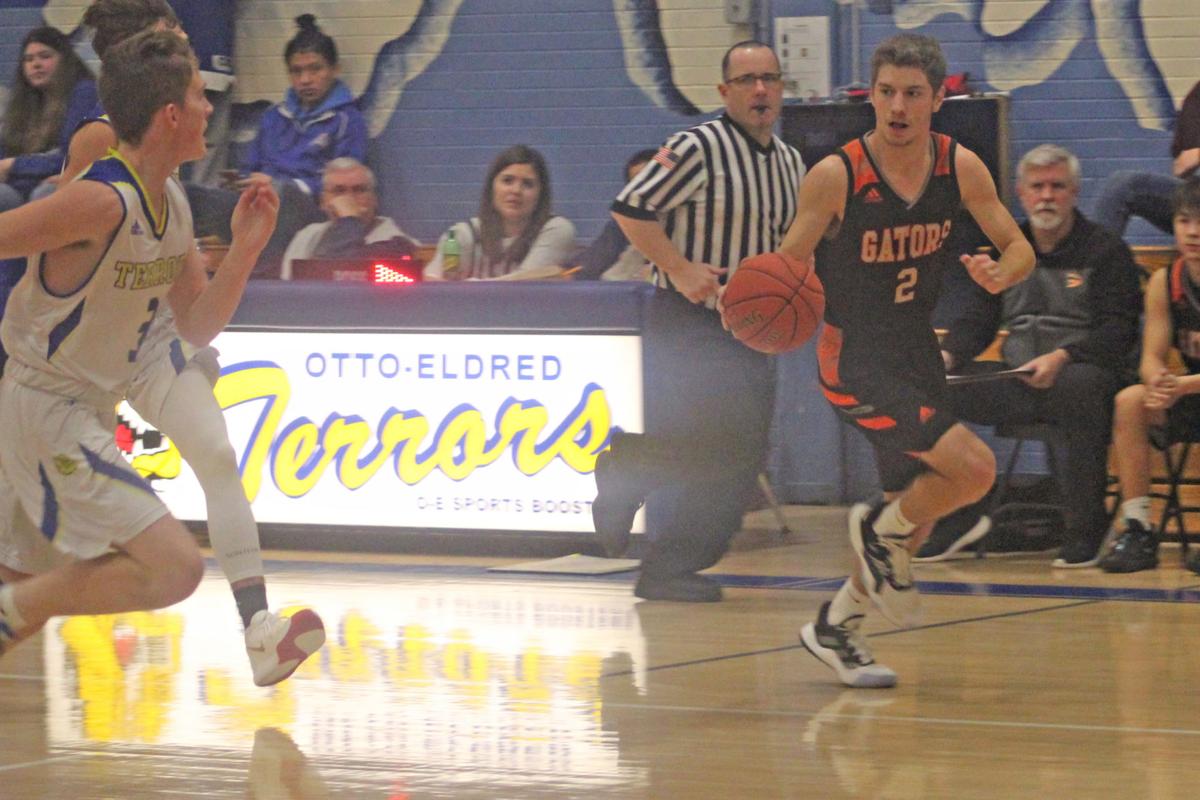 Port Allegany’s Howie Stuckey drives to the basket to convert two of his game-high 34 points in the Gators’ 54-53 win over Otto-Eldred Friday. Stuckey’s 3-pointer with 20 seconds to play gave Port the victory. 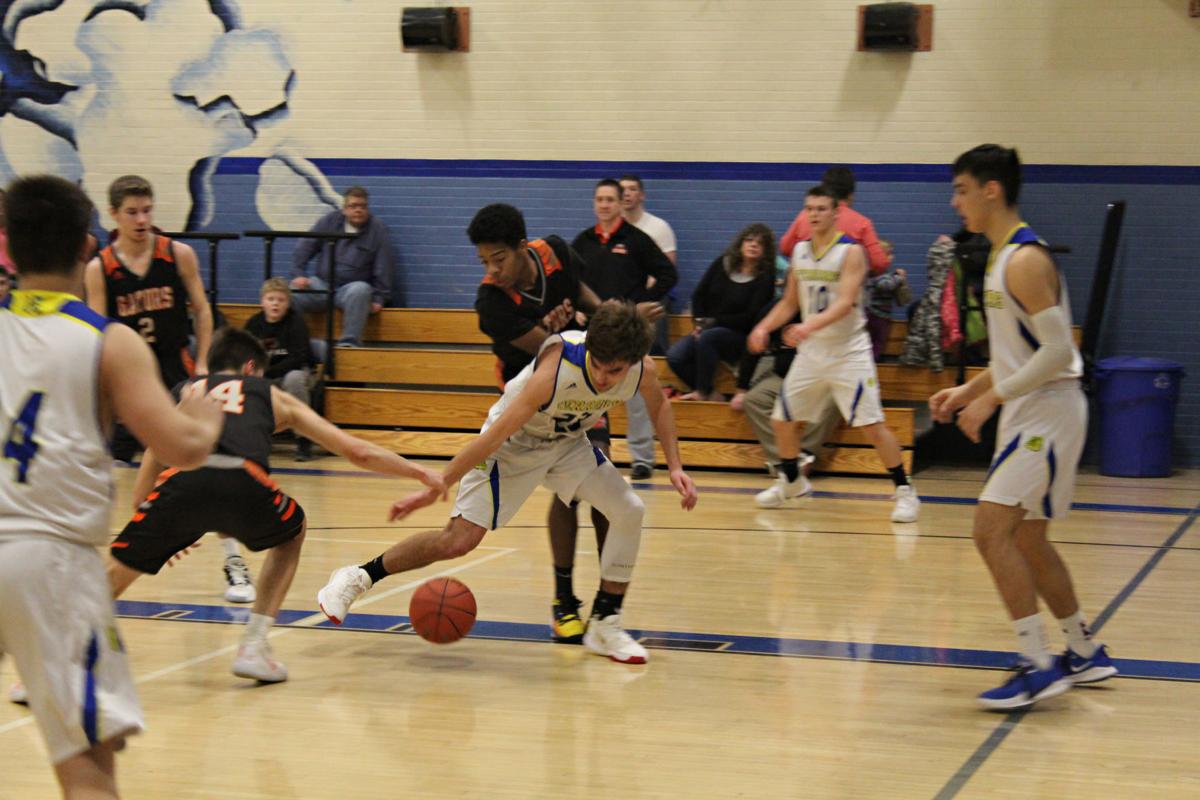 Otto-Eldred’s Cole Sebastian and Port Allegany’s Carter Moses (14) battle for a loose ball under the basket during the second half of Friday’s game. Port Allegany won, 54-53.

Port Allegany’s Howie Stuckey drives to the basket to convert two of his game-high 34 points in the Gators’ 54-53 win over Otto-Eldred Friday. Stuckey’s 3-pointer with 20 seconds to play gave Port the victory.

Otto-Eldred’s Cole Sebastian and Port Allegany’s Carter Moses (14) battle for a loose ball under the basket during the second half of Friday’s game. Port Allegany won, 54-53.

DUKE CENTER — Everyone in the building knew where the ball was going.

And with how he’d been playing for the first 31 and a half minutes, almost just as many figured what the result would be.

After Otto-Eldred’s Jake Merry hit a 3-pointer to put his team up by one with less than 40 seconds remaining, Port Allegany got the ball back into Howie Stuckey’s hands.

The Gators senior sensation — who already had 31 points to that point — had plenty of time to work with the ball to try for a game-winner.

He didn’t need it.

Stuckey, closely guarded by two Otto-Eldred defenders, heaved up an off-balance, 40-foot shot that went perfectly through the bottom of the net to give Port Allegany a 54-53 lead that would ultimately be the difference in a crucial North Tier League game on Friday.

For Stuckey, who had already hit six 3-pointers to that point, there was little doubt in his mind what the outcome would be when he was racing past halfcourt with 30 seconds to play.

“I was just thinking that I had to hit the next shot because it was basically hit-or-miss,” Stuckey said. “(My teammate) Noah Archer was like ‘I just saw it in your eyes that you were going to shoot that ball.’ And yeah, I knew I was going to shoot it. I’m just glad it went in.”

Otto-Eldred (9-6, 7-4) had a couple more good looks at the basket on the following possession — including a tip-in on a rebound that nearly rolled in — but couldn’t get one last shot to fall.

It was emblematic of a rough stretch for the Terrors, which were leading 40-30 with five minutes to play in the third quarter, but struggled on both sides of the ball over the final quarter and a half.

“We hit a lot of shots in that first half and I thought we played really well but I knew it wouldn’t last forever,” Otto-Eldred head coach Dan Dalton said. “We just had a tough time getting the ball inside and they did a good job against us. They made us beat them from the outside.”

He wasn’t kidding. The Terrors attempted 27 3-pointers in the game, including a 9-for-14 performance in the first half, but made just three treys in the final 16 minutes.

Jake Merry had another big night for O-E with six 3-pointers and 20 points, and teammate Cole Sebastian added 17.

Trailing 28-26 with under two minutes to play before halftime, Otto-Eldred hit 3-pointers on back-to-back-to-back possessions and built upon that momentum early in the second half.

But once those deep shots stopped falling from its opponent, Port Allegany was confident it could get back into the game.

How about some Bona trivia to help pass the time?

“When we went down 10 I was a little worried, but we just kind of hung in there,” Babcock said. “Everybody that got in the game I thought did a great job rebounding, but overall it was a great team effort.”

With the Otto-Eldred defense understandably focusing most of its attention on Stuckey in the fourth quarter, several of his teammates also provided timely buckets.

A.J. Edgell hit back-to-back shots in the paint to give Port Allegany a three-point lead at one point in the fourth, and Carter Moses added a critical bucket with a minute to go on a cross-court pass from Stuckey.

And those secondary contributors were all the more vital late because Port Allegany was again without starting point guard Jordan Card. The senior, who also missed Wednesday’s 56-35 win over Austin, is averaging nearly 14 points per game this season.

“Without him, I was really worried,” Babcock admitted. “At one point, I had three freshmen in the game but we were able to hang in there.”

Stuckey added, “It’s unfortunate that he’s not here, but we just all knew that we had to step up and play even harder.”

The win brings Port’s magical number to reach the postseason to four wins over its next six games, according to Babcock. Looking at the schedule, which features matchups against Coudersport and Ridgway, it’s all the more reason that the incredible final shot and possession from Stuckey were so critical.

“If we didn’t win this game we wouldn’t have gone to playoffs so this is a huge win," Stuckey said. "This is going to give us a lot of momentum for the next couple of games."

Light rain early...then remaining cloudy with showers in the afternoon. High near 45F. Winds W at 10 to 15 mph. Chance of rain 70%.

Rain and snow showers in the evening. Then remaining overcast late. Low 34F. Winds WNW at 5 to 10 mph. Chance of precip 60%.