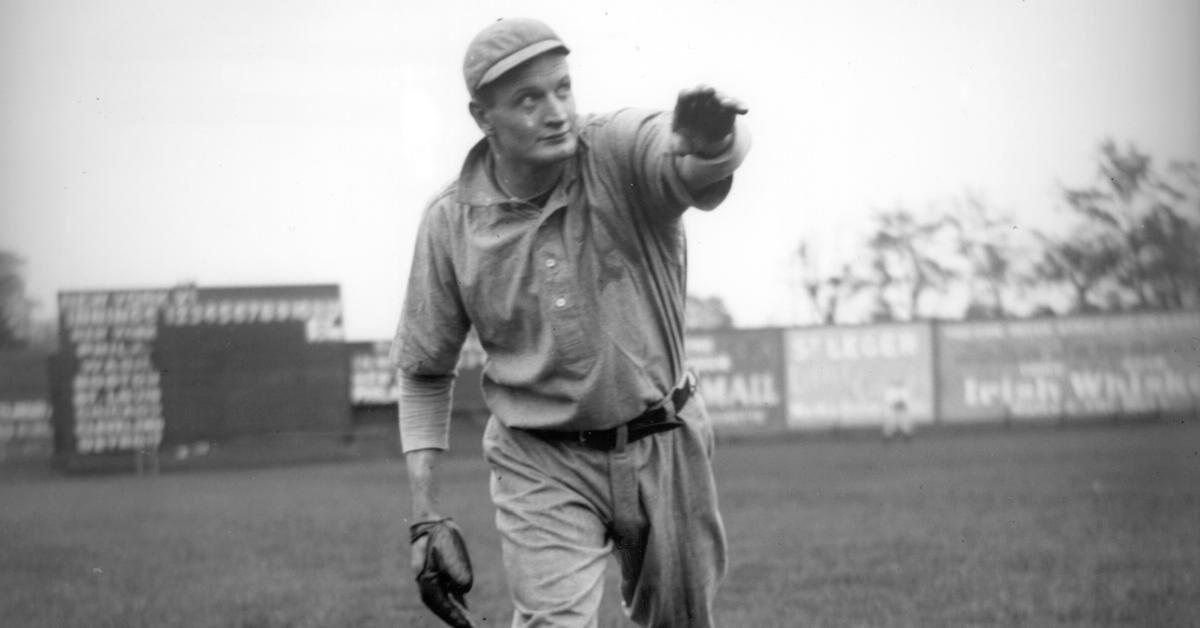 Bradford native and baseball hall of famer Rube Waddell warms up before a game. 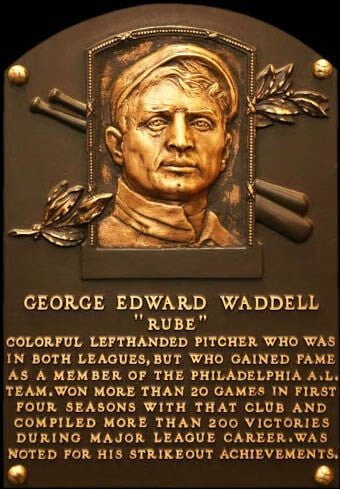 Pictured is Rube Waddell’s plaque at the Baseball Hall of Fame, located in Cooperstown, N.Y.

Bradford native and baseball hall of famer Rube Waddell warms up before a game.

Pictured is Rube Waddell’s plaque at the Baseball Hall of Fame, located in Cooperstown, N.Y.

He was born just outside of Bradford on October 13, 1876 as George Edward Waddell. But by the time he got to Major League Baseball in 1897, he was known simply as ‘Rube.’

Waddell played 13 years in the majors and posted an earned run average of 2.16 and struck out a blistering 2,316 batters in a career that stretched across five organizations — including two years with the Pittsburgh Pirates.

His best seasons were with the Philadelphia Athletics from 1902-1905, where Waddell won 97 games, won baseball’s pitching triple crown and led the league in strikeouts.

He last played in the majors in 1910, and died just a few years later from tuberculosis.

He was posthumously inducted into the Baseball Hall of Fame in 1946.

But not only was Waddell one of the best pitchers of his era, he was also one of the most colorful and unique athletes to ever play the game. Here are some Rube tidbits I discovered through way too much internet research:

Rube was a free spirit — even during games: An excerpt from John Thorn, one of Major League Baseball’s official historians and an author:

The stories go on and on about this wild and crazy guy and, remarkably, most of them are true. Playing marbles under the stands at game time while his teammates searched for their starting pitcher; being paid his year’s salary of $2,200 in one-dollar bills because he was so impulsive a spender; calling his outfielders to the sidelines, then striking out the batter.

Waddell’s teammates recalled that their ace would often ask his manager if he could pitch both ends of a doubleheader. Why? So that he could leave for a couple of days and go on fishing trips. He wouldn’t normally resurface until it was his turn to pitch again or the team had to travel for a road game.

Waddell was a big fan of playing marbles with “street urchins” and would wrestle alligators at spring training in Jacksonville, Florida, according to Thorn. He was also irresistibly attracted to fire engines, and on the day that he was pitching a teammate or more was always assigned to make sure he got to the ballpark all right, and didn't go off chasing any.

Rube didn’t get along with everybody: As you can imagine, some of Waddell’s antics didn’t sit so well with his teammates. He was alleged to have gotten in many spats — most of them verbal with his position players and managers — and rubbed quite a few guys the wrong way with his off-the-field activities. Waddell’s most famous fight, however, was supposed to have happened in 1905 and was the subject of a great deal of debate.

According to The Society for Baseball Research, Waddell and Philadelphia Athletics teammate Andy Coakley got into a fight at a train station over...Coakley’s straw hat. Waddell supposedly got the worst of the fight and injured his shoulder, causing him to miss most of the last month of the regular season and the entire World Series versus the New York Giants.

Robertson: Memories with Jane on our anniversary

Even back in 1905 that story sounded fishy and reporters and fans began to wonder if it wasn’t an injury at all, and if Waddell had actually been bribed to fake an injury to miss the rest of the season. The entire investigation into the incident can be seen here (https://sabr.org/research/strangest-month-strange-career-rube-waddell) and it’s an interesting tale, for sure. The researcher’s conclusion: that Waddell’s fight with Coakley was almost certainly a ruse. Whether that meant that our Bradford boy was throwing games — a prevalent and enticing opportunity for major leaguers to earn almost as much as their yearly salary back then — is still up for much debate.

Waddell loved to drink: At the source of Rube’s antics, fights and disappearances was perhaps one thing: alcohol. Waddell’s drinking problems were apparently well known, with several of his teammates openly trying to get the pitcher some help. The Sporting News dubbed him the “sousepaw,” a reference to his drinking habits and being left-handed.

Waddell also couldn’t remember how many women he had married, according to baseball historian Ken Burns, and although he was a “happy drunk” it also got him in a good deal of trouble.

Those marital problems caught up to him eventually, as he was actually arrested for bigamy as he had forgotten to divorce his previous wives before marrying again. Oops.

Waddell was also arrested during a game in 1903 for assaulting a fan who had criticized his pitching. Legendary manager Connie Mack had to bail him out of jail.

His career ended with the St. Louis Browns in 1910 shortly after he passed out in the middle of a game against New York following a night of heavy drinking.

Local connection: Waddell’s primary catcher with the A’s from 1903-1907 was none other than New Bethlehem’s Ossee Schrecongost. Schrecongost was a serviceable player in his own right, posting 45 RBI with Philadelphia in 1905, and also became one of Waddell’s closest friends. Schreckengost regularly went fishing and drinking with Rube, but towards the end of their careers the two had an alleged falling out over Waddell’s immaturity. Both players finished their careers elsewhere, and the two men did not make up. Regardless, two talented athletes from District 9 playing pitch-and-catch in the majors will certainly go down as one of this area’s neatest anecdotes.

Legacy: “He had more stuff than any pitcher I ever saw,” is how Mack once described Waddell. And for all of his personal demons, Waddell's brilliance on the mound was unquestioned.

But perhaps nothing better summarized the life of Waddell more than the epitaph on his tombstone in San Antonio — paid for by Mack and his former teammates — that reads, “Rube Waddell had only one priority, to have a good time.”

Suffice it to say, there will never be another athlete like Rube Waddell — in any sport.

Showers this morning then scattered thunderstorms developing during the afternoon hours. High 78F. Winds WNW at 5 to 10 mph. Chance of rain 50%.