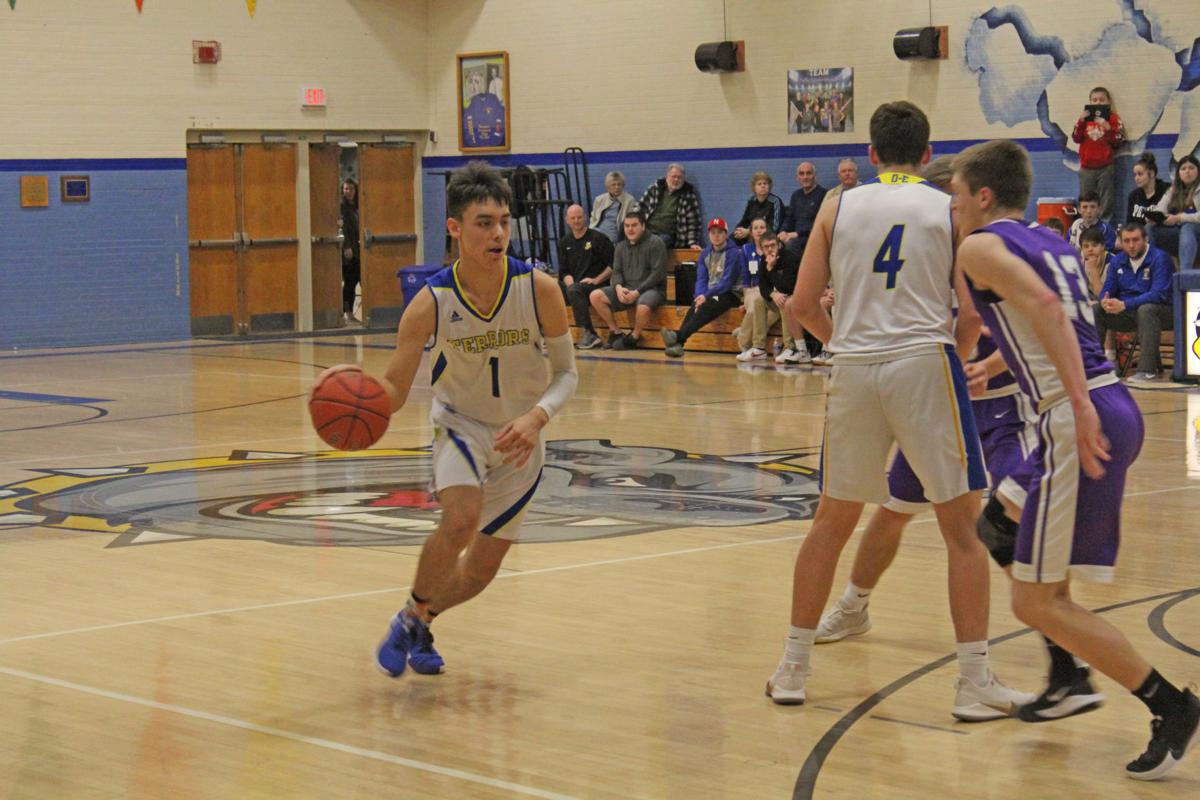 Otto-Eldred’s Gavin Jimerson works to get around a screen during the first half of Tuesday’s North Tier League game against Coudersport. The Terrors lost, 57-41. 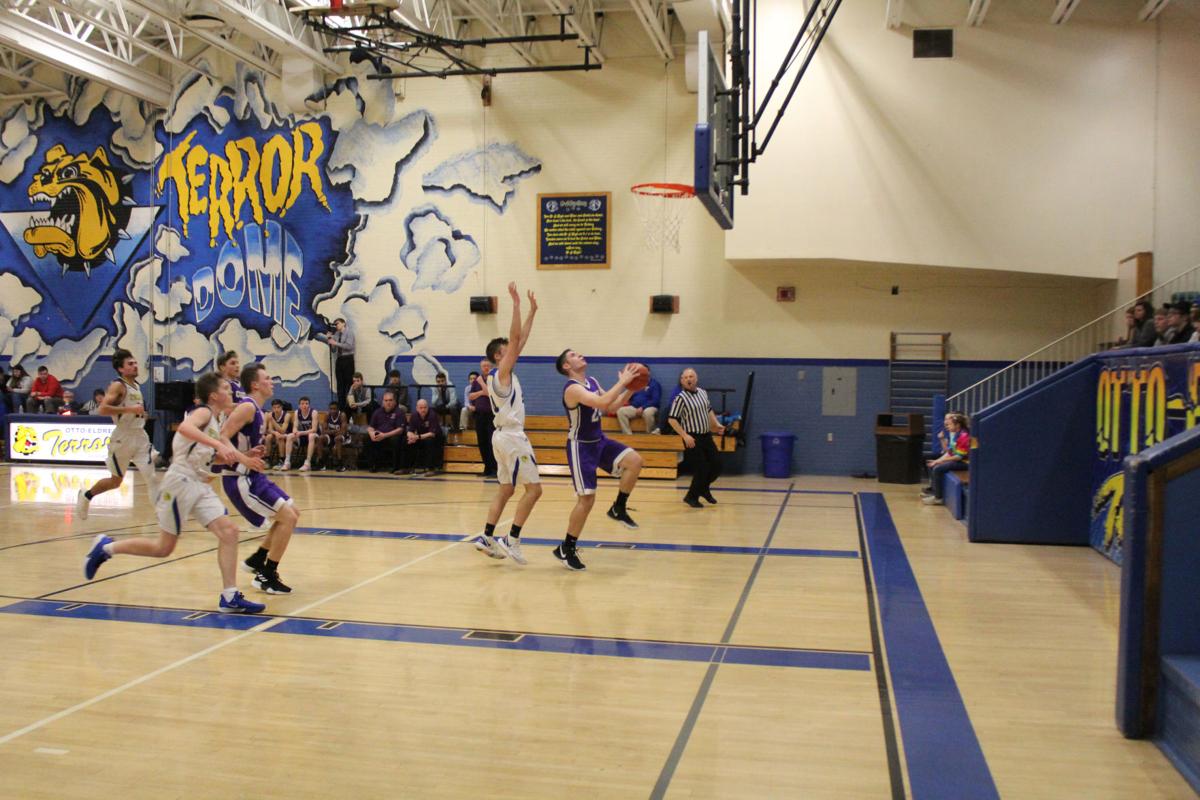 Coudersport’s Kolby VanWhy finishes off a layup during the second half of the Falcons’ 57-41 win Tuesday. VanWhy had 12 points.

Otto-Eldred’s Gavin Jimerson works to get around a screen during the first half of Tuesday’s North Tier League game against Coudersport. The Terrors lost, 57-41.

Coudersport’s Kolby VanWhy finishes off a layup during the second half of the Falcons’ 57-41 win Tuesday. VanWhy had 12 points.

DUKE CENTER — Coming into Tuesday night’s game, the Coudersport Falcons had won all seven of their North Tier League contests by at least 16 points.

And while the final score shows that the Falcons were again able to reach that mark against NTL foe Otto-Eldred, they were given everything they could handle from the host Terrors over the first three quarters in a competitive, back-and-forth beginning.

Trailing by as many as nine points late in the first half, Coudersport went on a 37-12 run over the final two and a half quarters to top Otto-Eldred 57-41 and stay perfect in league play.

Otto-Eldred (7-5, 5-3) was the better team for the game’s opening 12 minutes. After the two teams traded buckets for much of the opening quarter, the Terrors’ Jake Merry hit a 3-pointer at the first quarter buzzer to put O-E up 16-11.

The Terrors continued that momentum into the second quarter where they had four different scorers register at least two points to push they lead to 29-20.

“Otto-Eldred is a tough place to play and anybody that plays here knows that,” Coudersport coach Scott Easton said.

Despite the slow start, Coudersport didn’t so much as flinch. The Falcons hit two consecutive 3-pointers after the Terrors went up by nine and outscored O-E 8-2 to make it a one possession game at halftime. More importantly, they had seized the momentum back into their favor.

“I think the big thing is that we talk to our kids about confidence,” Easton said. “When we get down, it’s easy to lose that confidence. And then you knock down a couple shots and then all of a sudden the basket gets bigger and the kids start playing a little bit harder.”

And once point guard Hayden Keck got some of that confidence, the Falcons couldn’t be stopped. Keck scored the first eight points of the third quarter to catapult Coudersport back into the lead. The junior finished with a game-high 21, but none were as big as the shots he hit coming out of the intermission.

“Hayden absolutely has the ability to take over a game. At times he tries to do too much...tonight we needed him to do too much,” Easton said. “It was one of those things where at times he was able to create against their zone and get some penetration and get to the rim.”

Keck had four 3-pointers as part of his team’s 6-for-25 night from deep. And while that isn’t the typically potent numbers the Falcons have put up overall the past several seasons, they more than made up for it with another balanced offensive game.

“Yeah, it’s hard to guard that team,” Otto-Eldred head coach Dan Dalton said. “You do the best you can. I thought we did a decent job of closing out on shooters, but the Keck kid is for real. You try to contain him but once he starts feeling good and he starts knocking down shots he is hard to contain.”

And for as important as Keck’s strong shooting was in the Coudersport win, its defense over the final 16 minutes was just as critical. After allowing the Terrors to make four 3-pointers and score 31 points in the first half, the Falcons went to a physical man-to-man front in the second half and limited the Terrors to just 10 points the rest of the game.

In the third quarter, as part of a 14-3 Coudy run, the Terrors hit just one field goal. They also turned the ball over far too many times in the game as Dalton estimated that the Falcons made somewhere around 20 points in transition.

“They got a lot of points off transition and steals and stuff,” he said. “I thought if we would have taken care of the ball (better) we would have been in a little bit better of a situation later in the game.”

Steven M. Sipple: Would Frost ever give up play-calling? It's a question worth pondering

Who is Matt Lubick? Get to know the Huskers' new offensive coordinator

Despite the loss, Otto-Eldred’s fourth in its last six contests, Dalton was pleased with how his team played after after a couple of lethargic performances.

“It was a lot better effort tonight than we’ve had the last couple games,” he said. “If we can build on that effort that we had tonight...it was nice to see.”

Cloudy with snow showers mainly during the evening. Low 11F. Winds NNW at 5 to 10 mph. Chance of snow 50%. 1 to 3 inches of snow expected. Heavier amounts in favored snowbelt locales.

Cloudy with snow showers mainly during the evening. Low 11F. Winds NNW at 5 to 10 mph. Chance of snow 50%. 1 to 3 inches of snow expected. Heavier amounts in favored snowbelt locales.