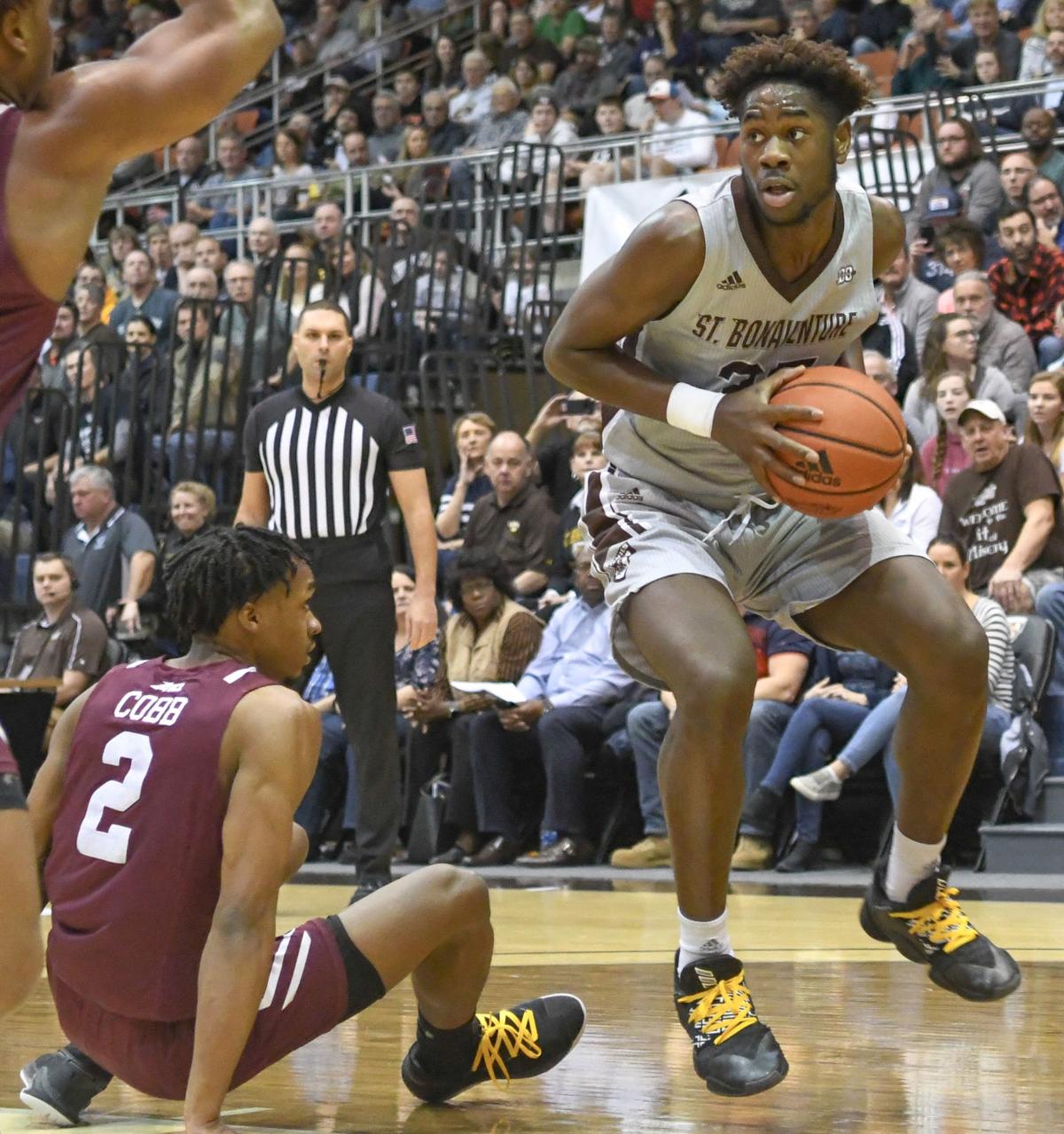 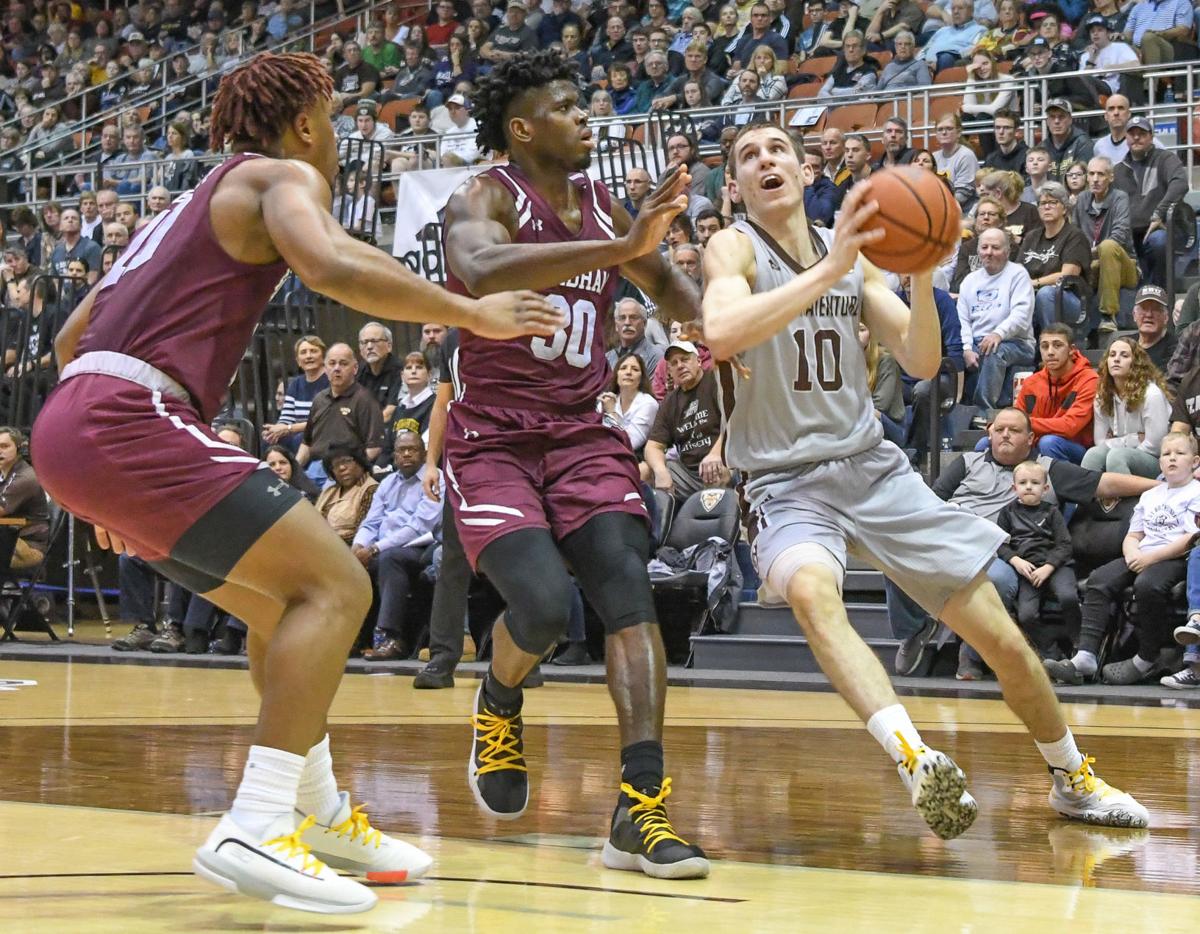 St. Bonaventure’s Bobby Planutis attempts to drive to the basket past two Fordham defenders during the Bonnies’ 64-44 win Saturday.

St. Bonaventure’s Bobby Planutis attempts to drive to the basket past two Fordham defenders during the Bonnies’ 64-44 win Saturday.

ST. BONAVENTURE, N.Y. — It wasn’t exactly where the St. Bonaventure men’s basketball team expected to be.

Not after having led comfortably for most of the way.

Midway through the second half, Kyle Lofton, in a rare bout with foul trouble, was forced to the bench with his fourth personal. Two minutes later, Fordham officially made things too close for comfort, trimming a 16-point Bona lead to five.

That’s when the Bonnies’ point guard, who’d quietly been putting together another splendid performance, intervened.

“The whole time, he’s talking to me and Matt (Johnson), looking us in our eyes and telling us, ‘let’s go, we need to pick it up,’” recalled Jaren English of the message that Lofton delivered. “So me and Matt, we just tried to pick it up, keep the same intensity, and he’s helping (us along the way) …

Lofton (7 assists) still finished with a team-high 17 points on 6-for-7 shooting and Bona, as a double-digit favorite, closed out on a 19-4 run to dispatch struggling and undermanned Fordham, 64-44, before a studentless, but solid crowd of 3,848 inside the Reilly Center on Saturday afternoon.

English and Johnson both helped to ensure that Bona pulled away in this “take care of business” affair.

The latter, back in the starting lineup after missing two games due to a concussion, totaled 16 points, six assists and three rebounds, including seven points in the Bonnies’ big run to seal it. Johnson, in the backup point guard role, hit a short jumper to push the lead back to 13 (57-44) with 4:34 remaining.

For Bona, “it was a struggle,” coach Mark Schmidt acknowledged.

“Give Fordham credit, they junked it up. Defensively, we did a really good job, but it was a struggle. The game was so slow, every possession counted. We got stagnant at times.”

“With our team, you can’t always rely on Kyle,” said Schmidt, when asked about the Bonnies’ play in his seven-minute absence. “There’s going to be times when your quarterback gets knocked out, so someone else has to step up, and it was good to see that we were able to go on a run with him on the bench.

“We don’t like to have Kyle sitting on the bench, but when that happens, someone else has to step up, and that’s the sign of a good team. I think we have a team that’s getting better, and we’re going to need everybody.”

Added Lofton, who sat for the first time since a two-minute break at Buffalo and whose 31 minutes were easily his fewest of the season: “I believe in (my teammates). I knew they could do it. I practice against these guys, they’re tough players. I was as confident in them as I am in myself.”

Bears 2020 vision: More must be done to maximize Mack

Former Arizona Wildcats DC Marcel Yates gets a new job, and it's in the Pac-12

Facing a Fordham team that ranked 340th (of 350) nationally in scoring and was without three of its top four scorers due to injury, Bona did what it needed to defensively — it held the Rams (6-9, 0-3) to 44 points on a miniscule 24 percent shooting and forced them into only 14 two-point shots as they finished 9-for-40 from 3-point range.

It marked the first time that Bona has held back-to-back opponents to fewer than 50 points (along with Wednesday’s 61-49 victory over George Mason) since wins over South Dakota State and Abilene Christian to start the 2013-14 campaign.

Aside from that second-half lull, they’d also mostly had control, taking a double-digit lead late in the first half, bringing a 38-24 advantage into the break and still leading by 10 when Lofton went to the bench at the 10:55 mark.

On this day, against a Rams group that leads the league in scoring defense, a low-scoring, slower-paced affair is simply the kind of game in which Bona found itself in.

“It’s the game; that’s just how it goes,” Schmidt said. “Some games, it’s more up-and-down, and today it was more like a rock fight. We did what we needed to do defensively … we won. It wasn’t pretty, we need to get better, but everybody needs to get better.”

Osun Osunniyi, despite being limited by a gameplan intent on stopping him, still contributed 14 rebounds and three blocks. The Bonnies shot 51 percent despite, again, barely scraping 60 points.

By the final horn, though, numbers didn’t matter. Neither did the fact that the Rams had successfully lulled the Bonnies into their kind of game. What mattered was pulling out a win, its 10th in the last 11 games.

“Overall, we wanted to get the win,” English said. “That was the biggest thing, we got the win. It wasn’t how we wanted it. We should have cleaned some things up and did some things better, but a win is a win.

“Right now, we’re 3-0 in the A-10, we’re super excited. We need home games, we’ve got to protect the Reilly Center. It was a little difficult, them slowing it down, but I think we adjusted to it and overall we played a good game and got the win.”

Cloudy with snow showers developing for the afternoon. Temps nearly steady in the low to mid 30s. Winds WSW at 5 to 10 mph. Chance of snow 50%.