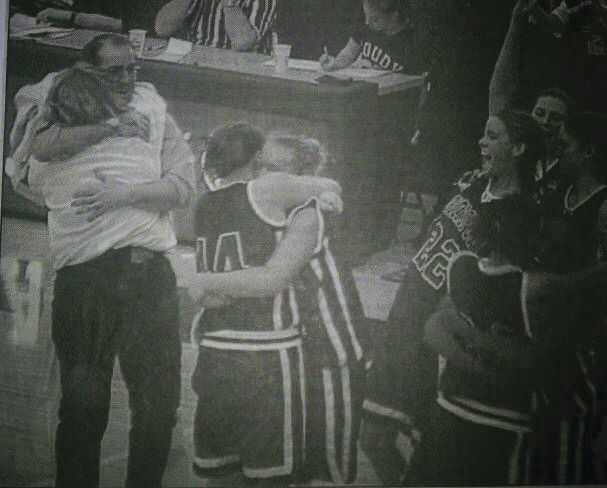 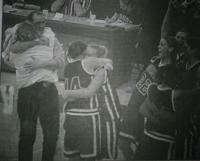 Teammates and coaches from the 2002-2003 Coudersport girls basketball team celebrate together after toppling Serra Catholic 54-42 to reach the PIAA Class A Final Four. 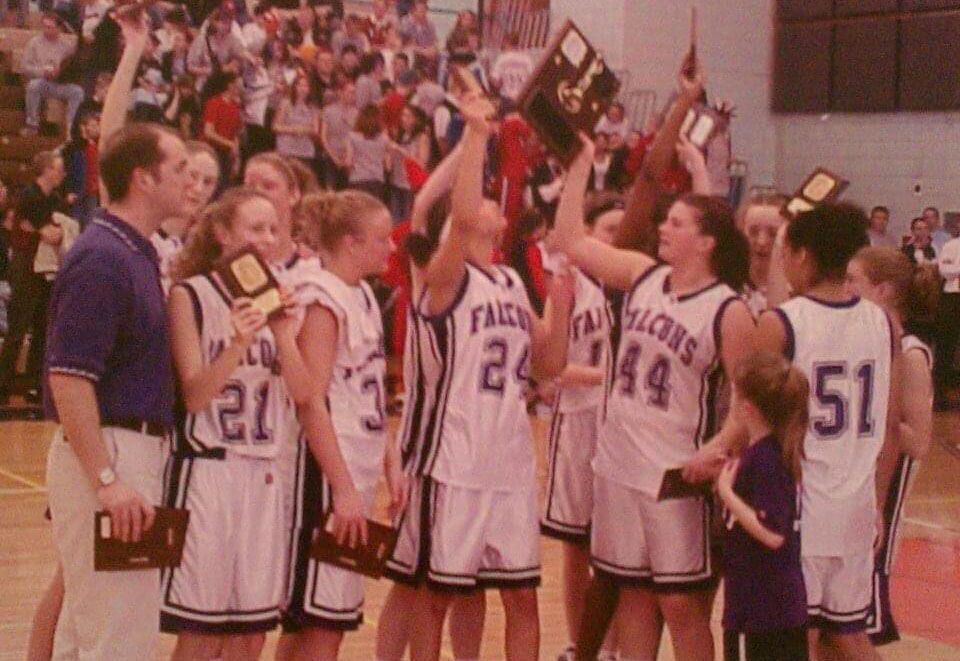 The 2002-2003 Coudersport Lady Falcons hoist up their District 9 championship plaque after defeating Cameron County 40-37 in D9 finale. The team eventually made the state semifinals.

Teammates and coaches from the 2002-2003 Coudersport girls basketball team celebrate together after toppling Serra Catholic 54-42 to reach the PIAA Class A Final Four.

The 2002-2003 Coudersport Lady Falcons hoist up their District 9 championship plaque after defeating Cameron County 40-37 in D9 finale. The team eventually made the state semifinals.

(Editor’s note: This is the latest installment in a series of articles revisiting the best local sports teams from each Big 30 school. Teams chosen range from undefeated regular seasons, to district titles, to success at the state level. Today: the 2002-2003 Coudersport girls basketball team.)

Only twice since the PIAA began hosting girls basketball championships in 1973 has a Big 30 school made the Pennsylvania Final Four.

The Bradford Lady Owls did it first during the 1976 postseason, finishing as runners-up in Class AAA, while the Coudersport Lady Falcons were the most recent team to do so, reaching the Class A semifinals in 2003.

For those Lady Falcons, which went 28-2 and dropped only one game within District 9, that run to the Final Four was predicated on two things: chemistry and an attitude of quiet confidence.

“The girls got along. They were focused on winning and not on stats,” then-head coach Matt Splain said. “They wanted to win as a team, and they just played for each other… And they played with confidence and the rest just came together.”

THOUGH THE individual players weren’t focused on their own accolades, there was plenty of talent to go around the roster that season. That began with senior forward Danyelle Whitman, who Splain described as the team’s “quiet leader” and frequently led the Lady Falcons in points and rebounds during the year.

“She was so tough,” said Kellie Tingley, a guard on the team and junior that season. “She was that person you wanted underneath on both offense and defense, because she’d battle with anybody and everybody. It didn’t matter who it was, and she did it in a silent, Tim Duncan-type way.”

Whitman had plenty of help, too, and it was that balance that generated much of Coudy’s success. Sharing duties with Whitman in the post was 6-foot forward Andrea Glassmire, whose presence down low was especially helpful on defense and on the boards.

“It was key,” Tingley said of the team’s balance. “That came into play when we needed it most. There were moments when one of us was off, but someone was there to pick up the slack and then you also had nights where everybody was on, and it was like magic almost.”

IT CERTAINLY showed early on, as the Lady Falcons began their season 9-0 with a trio of early-season tournament championships, two at Sheffield and one at DuBois Central Catholic.

That start laid the foundation for a dominant run through the North Tier League, though things weren’t always a breeze. The Lady Falcons survived a pair of tough tests against Cameron County, who they’d meet again in the District 9 playoffs, as well as a home contest against Otto-Eldred.

“Getting through those big games was evidence (the girls) were onto something,” Splain said. “They stayed even keeled and just had that killer instinct.”

For all the success and momentum they had, though, the Lady Falcons suffered their first and only loss of the regular season on its last day, a 45-31 defeat at Otto-Eldred.

“I can remember one of their fans greeting me off the bus and saying ‘you’re not leaving undefeated,’” Splain said. “That was one of Randy Stebbins’ high-quality teams, and he had his girls ready to go.

“He came up with some sort of crazy defense that I’m still trying to figure out even today. We couldn’t put the ball in the bucket, and they handed us that first loss.”

It may not have seemed like it at the time, but Splain says looking back, it was likely a blessing in disguise.

“It kind of refocused us for the playoffs,” said Splain, who now serves as the superintendent of the Otto-Eldred School District. “(Stebbins) told me if they didn’t beat us, we wouldn’t have gotten as far as we did, and I think he was right, because we did a great job through February and March.”

Then, in the D9 Class A championship, the Lady Falcons overcame a 33-27 deficit entering the fourth quarter to top Cameron County for a third time, 40-37, to secure Coudersport’s 10th District 9 championship in 14 years.

The comeback came even as Brown and Tingley were held scoreless and only one Lady Falcon, Whitman, scored in double figures.

From there, the success only grew, as Coudy took down Juniata Valley, 66-54, and Sewickley Academy, 59-38, in the first two rounds of the state playoffs to set up a pivotal quarterfinal match with Serra Catholic.

In the romp over Sewickley, three different Lady Falcons were in double figures, with Whitman and Tingley leading with 24 and 17 points, respectively.

“Everybody was on that night, and we just lifted each other up,” Tingley recalled. “There was no limit, and that’s how we ended up beating the teams we ‘shouldn’t’ have beaten.”

A ROUND later in the Elite 8, Tingley was at the forefront again, as her team-high 15 points helped lead Coudy past Serra Catholic 54-42 despite 20 turnovers.

It was a bit of vindication for the team, according to Tingley and Splain, as the Lady Falcons felt overlooked that night.

“That was the first year the PIAA implemented that you couldn’t come out for warmups and dribble around the opposing team as you came out. They did that and were assessed a technical foul for it,” Splain recalled. “Kellie started us off 2-0 (with free throws) and that set the tone that we could do this.

“It was ours for the taking and we weren’t going to be deterred that night... and it was the most satisfying win I ever had.”

Added Tingley, “They saw a small-town school that did well in their little league, and maybe had one good run. So nobody ever expected us to go that far, and we took full advantage of it.”

A game later, though, Coudersport’s magical run came to an end, as the Lady Falcons were beaten by eventual state champion Bishop Carroll, 53-33.

Splain feels had the team been able to get past BC, it would have been well-positioned to win the title.

“We would’ve been right there (with the competition) if we had gotten past Bishop Carroll,” he said.

The loss to Bishop Carroll aside, the success of that Coudersport season remains unmatched by any Big 30 Pennsylvania team since.

Tingley says the bond that team shared is why it was so successful, and it made an impression on her she still carries to this day.

“It wasn’t any one special moment; it was a lot of special moments,” she said of the year. “When you look back, you think, ‘Wow, we did that.’ It was a collaborative effort to make that happen, and that was something special.

“It’s something I’ve never experienced on any team in my life except that one. I’ve never felt that connection as a teammate, and I think that’s what was important.”