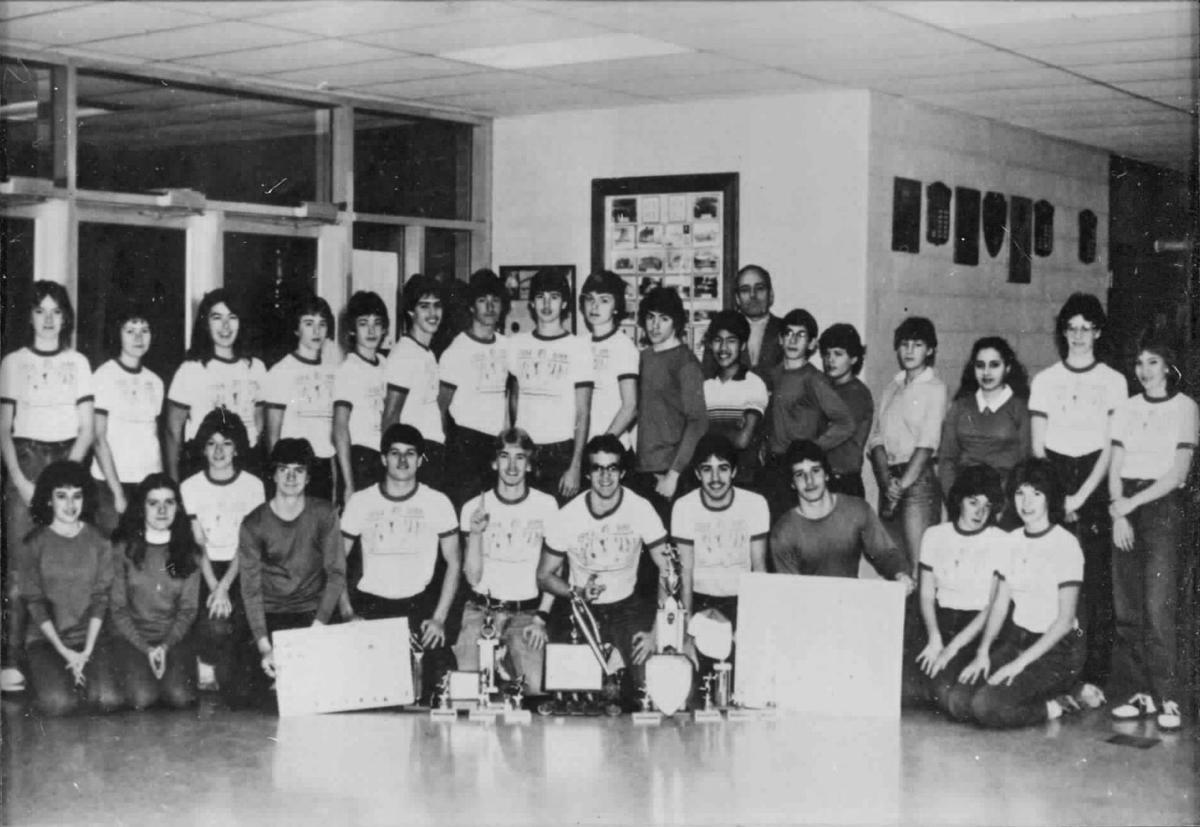 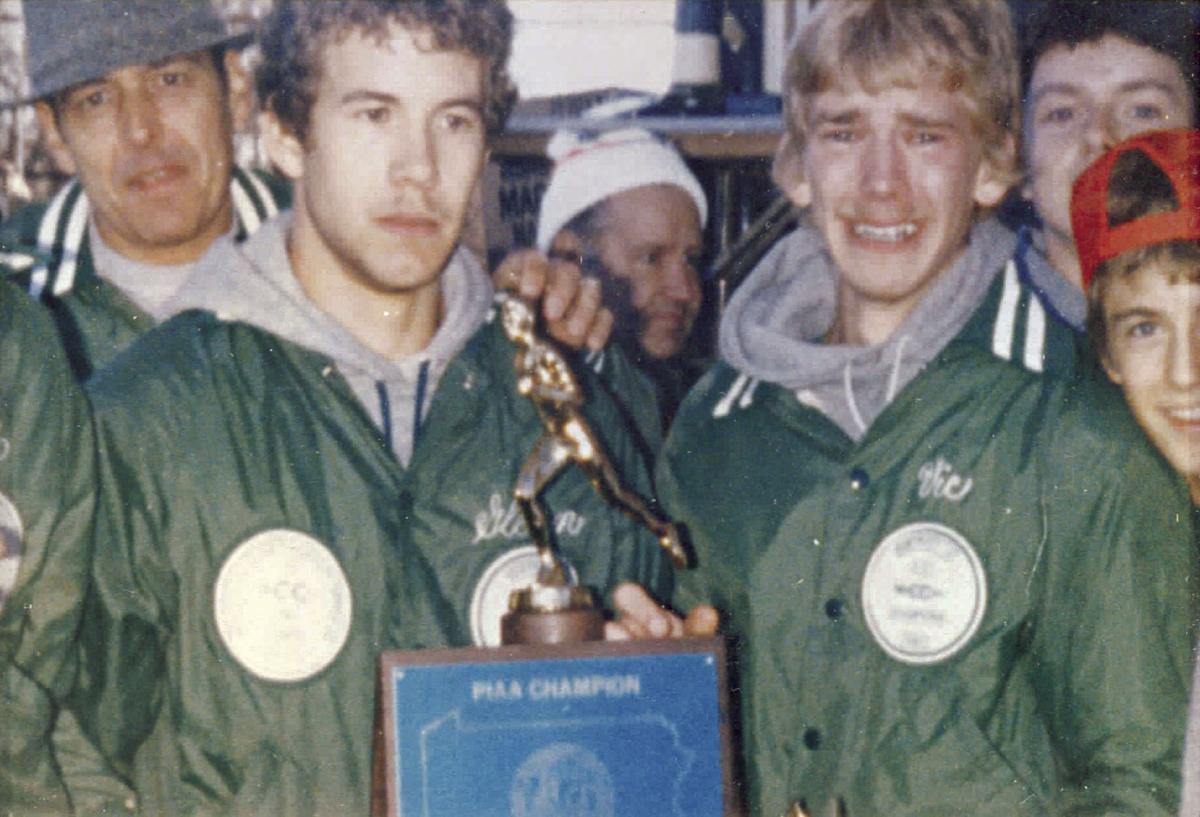 (Editor’s note: This is the latest in a series of articles revisiting the best local sports teams from each Big 30 school. Teams chosen range from undefeated regular seasons, to district titles, to success at the state level. Today: the 1984 Oswayo Valley boys cross country team)

The Pennsylvania Interscholastic Athletic Association’s website recalls the morning of November 3, 1984, at Saucon Valley Fields at Lehigh University as “sunny, clear and a perfect day to run.”

For a team of talented teenagers from Shinglehouse, they remember it simply as the day that their lives forever changed.

The Oswayo Valley boys cross country team had checked all of the boxes to that point.

They had enjoyed an undefeated 1984 regular season, they had taken first-place at two invitationals and had nearly set a District 9 record for the lowest score possible at the D9 meet the week prior — winning their third straight championship in the process.

But the Green Wave, led by a quintet of runners (Scott Reynolds, Vic Taylor, Glenn Drake, Todd Vicent and Jay Buchanan) and their beloved coaching staff (Hank Wojociechowski and Kevin Hanley) had one goal left as it made the 244-mile trek to Lehigh that weekend: a state championship after finishing as the Class AA runner-up in 1983.

“The thing that made our team so special is that we all had a role and we knew our role,” Reynolds said. “And we knew that if all just got a little bit better in our role from the year before, we were going to be good. It was a lot of work and training, and it paid off.”

MONTHS before the start gun went off at the PIAA Championships in Bethlehem, the Green Wave was busy fine-tuning its craft along trails in Shinglehouse.

That 1984 team called itself, ‘The Family,’ a relationship illustrated by what they used to call “fun runs,” a team-building exercise and a way to loosen things up in what is usually a grueling cross country season that puts a lot of stress on the body, both mentally and physically.

“We would do 14- to 16-mile fun runs on Saturday and we would get out there and be excited for them because the seniors and Coach Hanley organized it,” Reynolds said. “We would just stop and run off into the woods and were able to create our own entertainment.

“The leadership from that group, at such a young age, you can’t match it.”

That leadership carried into results almost immediately in 1984 as Oswayo Valley won its first two big tournaments (Camptown Races and Mansfield Invitational) and rolled through all of its North Tier League opponents.

But it was an event it didn’t win — the McQuaid Invitational in Rochester, N.Y. — that perhaps did more for the team’s push toward a state title than any regular season trophy could have.

“We got beat by two teams there (Blue Mountain, Wilson) that we knew we were going to face at states,” Reynolds recalled. “We were lethargic and I remember it like it was yesterday. But it really motivated us to dial back in, train effectively and kind of set us back into reality that this wasn’t going to be so easy.”

OV took care of the remainder of its dual meets on the schedule and then put together a remarkable performance at the D9 Class AA meet in Kane.

The best score a team could get at the meet was a 15. Oswayo Valley scored a 16.

“We always got together and psyched each other up,” Drake recalled. “Coach Wojo was an extreme motivator and when he would give you a speech, at that very second, if you could, you would just take off running and go ungodly fast … it was amazing how much that man could motivate you.”

WOJOCIECHOWSKI motivated his team even more in the days leading up to the PIAA meet. Staying at a local hotel, the head coach, who had a 45-3 record through four years at OV, came across a newspaper article that had predicted Blue Mountain to win the meet.

That same article said that Oswayo Valley “should be strong, but that the Wilson and Blue Mountain teams defeated (OV) comfortably earlier this year in the McQuaid Invitational.”

Not that a group of seniors who had finished second the year before at states and had just breezed through the D9 meet needed even more of a push toward that finish line, but they got it.

“The kids were very, very motivated and began to understand that you don’t have to come from a big school in order to be successful,” Hanley said.

“I remember one meet we went to (that year) with 16 other teams and OV was on the board and all of these other coaches were asking, ‘Who the heck is OV?’ We won the meet and everyone knew who we were (after that) and that was one of the first times that the kids understood that the team working together could win.”

And working together on that November 3 morning, it turns out the Green Waves had nothing to worry about with Blue Mountain or Wilson. At all.

“The best way to describe it is when that start gun goes off, it sounds like a herd of buffalo in a stampede,” Taylor said. “It’s quite a rush.”

Running in a pack that fit its family mentality, OV had four runners finish in the top 40.

Like most things the Green Wave did that year, it had a strategy for the 3.1-mile championship course at Lehigh — one developed by the coaching staff and one executed perfectly by the athletes.

“Hank was the head coach and he did great in always being optimistic and encouraging the kids,” Hanley explained. “My bailiwick was training and learning how to take the course and I broke (the state championship) down into 10 sections. Kids would get to certain sections and we’d yell, ‘Three!’ and they knew exactly what that meant.

“We ran that race in stages and they knew what to do in each stage in order to be successful.”

After some quick math and a double check with race officials, the realization soon began to set in for a bunch of 17- and 18-year-olds from one of the state’s smallest school districts: they were champions.

“It was cloud nine,” said Taylor, who still lives in Shinglehouse. “It was invigorating and emotional and all of our hard work had paid off. All the training and the running on the hills and the sprints and it all worked out. A great bunch of guys from a small town that grew up together had done it.”

When all was said and done, Oswayo Valley finished with a team score of 198 (cross country scores are tabulated by taking the top five individual scores and adding them together) and improved their score by 117 points from its second-place finish in 1983.

Second place, Danville, was a distant second with a score of 24. Blue Mountain finished ninth, Wilson seventh and York Catholic — which beat OV by 69 the year before — was a distant 14th.

Added Reynolds, “We had a belief system from our coaches that we really, really could do this. You can’t describe the feeling. We accomplished the goal and nobody had ever done that. Gosh, it was just amazing.”

THE reaction in Shinglehouse? To be expected, a whole lot of pride and euphoria.

“We came into town and there was a police escort and people were out on the streets and honking,” recalled Drake, who still lives in Shinglehouse and is currently serving his second term as Potter County Sheriff.

“We had gained a pretty good following throughout the entire year with us winning all those (events) and big races and people started paying attention to us. It was pretty amazing.”

The legacy of that team lives on to this day. That ‘84 squad remains the only state championship in Oswayo Valley or Potter County history and that three-year stretch of dominance in cross country is something that may never be repeated by a local team again.

“One of the things that I told the team was always this: there is no one of us more important than all of us and each of us is as important to the rest of us,” Hanley said.

“We knew we had the horses that year and the teams further south had been tough for years but for a little school from Oswayo to do that … it’s just great memories. It’s all about those kids and the work they put in.”