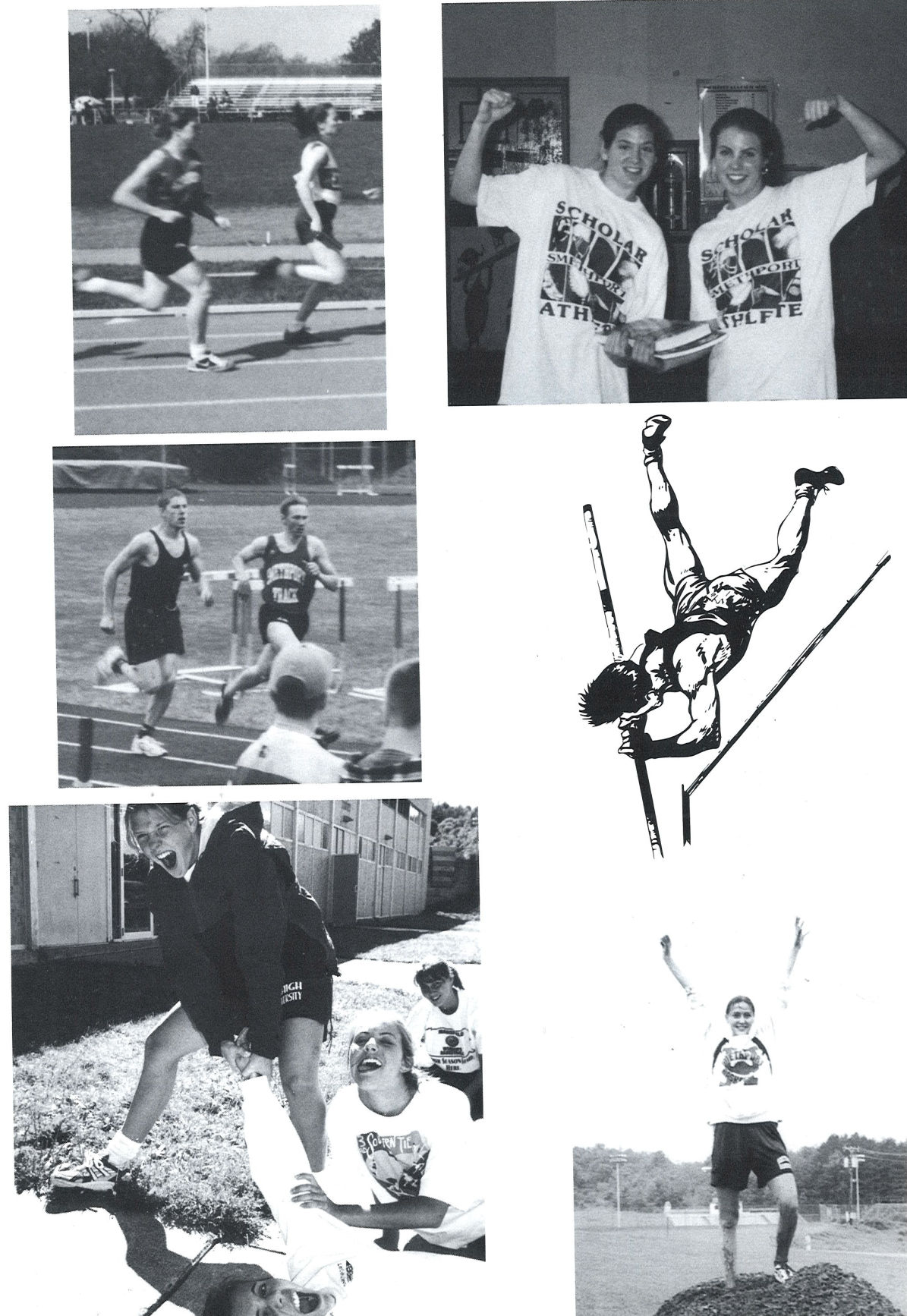 The track and field teams pages from the 1998 Smethport school yearbook featuring photos from the girls’ run to a state championship.

The track and field teams pages from the 1998 Smethport school yearbook featuring photos from the girls’ run to a state championship.

(Editor’s note: This is the first in a series of articles revisiting the best local sports teams from each school. Teams chosen range from undefeated regular seasons to district titles to success at the state level. Today: the 1997 Smethport girls track and field team)

By the time the 1997 track and field season rolled around, Smethport head coach Rick Woodring was no stranger to great teams and athletes.

Woodring had been an assistant coach on those great Hubber football teams of the 1980s and ‘90s, one of the top dynasties in Pennsylvania history that posted undefeated regular seasons, District 9 titles and state playoff wins.

So very few coaches knew what teams were cut out to win games at the highest levels quite like Woodring did. And he saw it in his Lady Hubbers before the 1997 season even began.

After all, Smethport was bringing back a two-time defending state champion Brandy Colley (3,200 run) as well as state medalist Stephanie Bango to the fold.

The girls went just 5-4 in the regular season and didn’t even win the North Tier League title, coming in second to rival Coudersport. But Woodring points out, “dual meets are much different than invitationals. We didn’t have a deep team, but we had a strong team.”

And those invitationals, where Colley, Bango and the Hubbers’ 3,200 relay team were able to shine the brightest, began to earn the Lady Hubbers respect from around the state and validate Woodring’s hope that his team could do something special when it mattered most — first at districts and then at the state meet in Shippensburg in late May.

“Everything we did during the season in the meets, the invites and practices was all pointed to that one weekend,” he said.

“We knew we had a good shot of doing well. Were we going to win the state championship? We were going down there with the intention to. I’m not being conceited, but we went down there to get gold medals in all of our events. That’s what we were planning on doing and if we got enough, we were going to win the state championship. That’s the way they all bought into it and they believed it. It might sound a little foolish, but they believed they had a shot down there to win it all.”

TWENTY THREE years to the date of that Class AA state championship and Woodring, Bango and Colley fondly recall their own unique memories from those two days in Shippensburg — May 23 and 24, 1997 — a journey that brought the first team PIAA championship to any McKean County school in over 40 years.

Colley, a senior who had swept her events a week prior in the District 9 championships, and Bango, one of the top mid-distance runners in D9, were first up in the 3,200 relay event with teammates Nicole Windsor and Shannon Murphy.

After the preliminaries for the individual events were run Friday, that relay was the first event on Saturday’s schedule. With district and state medals already under her belt, Colley was calm heading into the race, using her years of experience as a guide and setting the tone for her teammates.

“For me, I had been doing it for a long time so I just went into my own mindset and my own little world and tuned everybody out. Concentrate on each race and take it one at a time.”

The first two legs of the relay were run by Windsor and Murphy, and interestingly enough, Woodring had planned for the Lady Hubbers to be near last place at the halfway point. Sure enough, despite the two juniors running their personal best times, Smethport found itself well behind the leaders heading into Colley’s leg of the race.

“We always had our relay team running basically slowest to fastest,” Woodring explained.

“And each of them ran spectacular times — and then we went to Brandy and she ran a personal-best 2:23 and that brought us up to second place where we knew that’s where we were going to be.

“We handed it to Steph and she ran 2:18 easily. In fact, she went behind the girl for a lap and a half and then took off. She knew what she was running against and what their times were.

We were confident; we knew that once we handed it off to her that we had won before we had even seen her run two laps.”

The Lady Hubbers successfully worked their way up from the back of the pack, running a school record 9:44.1 and edging out fellow District 9 foe Brookville by three seconds.

Woodring also credited the team’s alternate on that relay team, Jenni Lyon, whom he called the “ultimate teammate” that had to go through all of the same workouts and preparation despite watching from the sidelines on race day.

The victory in the relay put the other schools on notice and began what would be a day-long trip to the podium for Smethport.

“It was amazing,” Colley said of that relay win. “It still brings chills to me now. We actually had a video of it … my mom was on one side and Steph’s was on the other and we put the video together side-by-side and you could see everyone crying. We were all just balling, it was an incredible moment.”

COLLEY then had about a 45-minute break after the relay to receive her medals and rest up before she competed in the 3,200 run. She showed no signs of fatigue and repeated as the state champ in a school-record time of 10:58.59, setting a blistering pace and beating the second-place finisher by nearly 12 seconds. Then, an hour later, she returned to the track and picked up some critical points by finishing second in the 1,600-run with a personal best time of 5:09.36.

“Those times in between races are OK for a dual meet, but for a state championship that’s not a lot when you’re going against that caliber of runner,” Woodring noted.

Soon after Colley was done earning her medals, Bango stepped to the track to compete in her runs. First up, she took silver in the 400 with a personal-best time of :57.67. She got about a two-hour rest and came back out and ran her 800 and won her gold medal in 2:13.58.

“When you’re warming up and running the races, it really is all a blur,” Bango said. “We had four girls (competing) and schools like Hershey had their entire team there. But we never let intimidation take hold of us … for whatever reason we just dominated and hung onto that. We are all fighters.”

After Bango’s strong finishes, the Lady Hubbers had certainly put themselves in a fantastic position to bring some team hardware back to McKean County. But the reality of being on the verge of a state title was almost too surreal for Woodring to believe.

“Later after the 200 race was done and they were about to start some of the other relays, Jack Hedlund from District 9 came over to me and said ‘You guys are going to win the state championship and Hershey can only get so many points.’ I said ‘Jack, thank you so much but I don’t want to jinx anything and I can’t possibly think of that until I know that every point is in the book.’”

But there would be no jinx. The Lady Hubbers secured the first, and so far, only, state championship in school history with a 46-38 win over second place Milton Hershey.

“It was kind of like a Cinderella story,” Bango said. “We’re able to go down and bring a state title back to our small town of Smethport. It’s an unreal sense of accomplishment mixed with excitement.”

“It was a huge thing .. .there were a lot of tears,” Colley added. “I try to tell my daughter about it, and she says, ‘Yeah, whatever mom.’ But it was big, we just had a great all-around team. We all were great together and worked well together.”

THE TEAM returned to Smethport later that day and rode in the town’s Memorial Day parade to mark the start of their celebrations.

Both Colley and Bango continued their running careers in college. Colley went to Penn State and Bango starred at Bucknell, where she holds several school records and earned an induction into the Bucknell Hall of Fame a few years after their graduation.

Both women now have careers and families, but they’ll always be connected by that team, and those two days in Shippensburg.

“We’re bonded over this forever and we have this really amazing experience for the rest of our lives,” Bango said. “And props to Woody and the other coaches. (Woodring) knew us so well individually and he knew what our strengths were. He would pull us to the side and give us pep talks and if he didn’t have confidence in us, he certainly wouldn’t show it.”

Woodring now serves as Smethport’s athletic director, and is also the head coach of the boys track and field team and still serves as an assistant to the girls.

He credits assistant coaches Bill Stephen, Tony Valenti and Keith Menendez as having just as much influence on the team as he did and a real team bond amongst the girls that ultimately pushed them to PIAA gold.

“All five of them have gone on to college, have good jobs and families and so forth. They’ve all done well for themselves in life.”