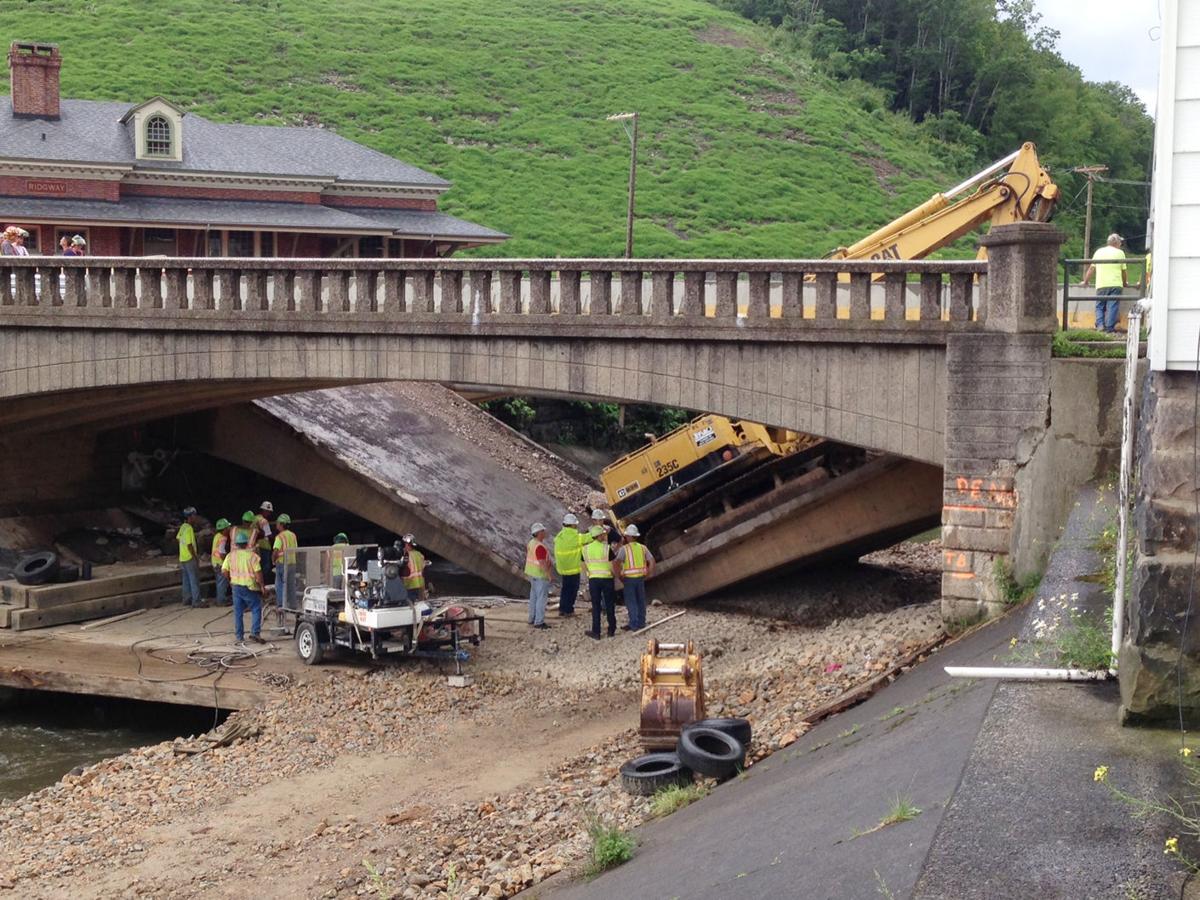 Construction workers, along with emergency crews and Pennsylvania Department of Transportation officials, survey the damage caused when the Pennsy Bridge buckled and collapsed just after 2 p.m. Thursday. 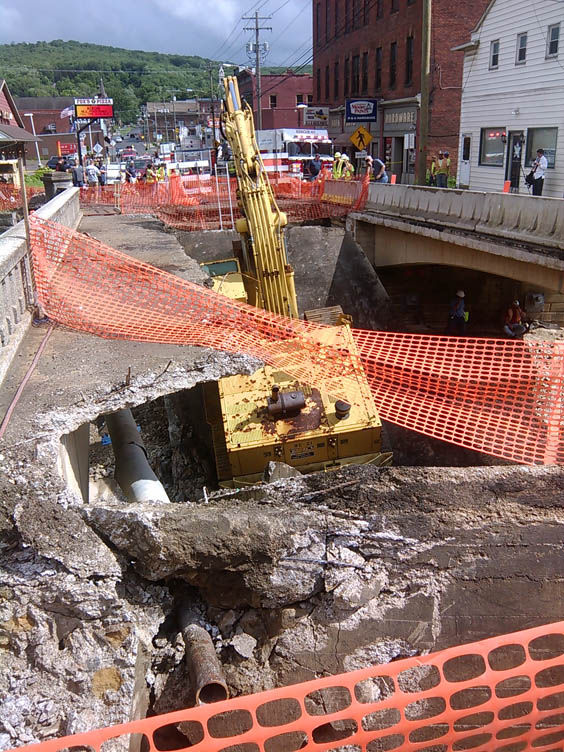 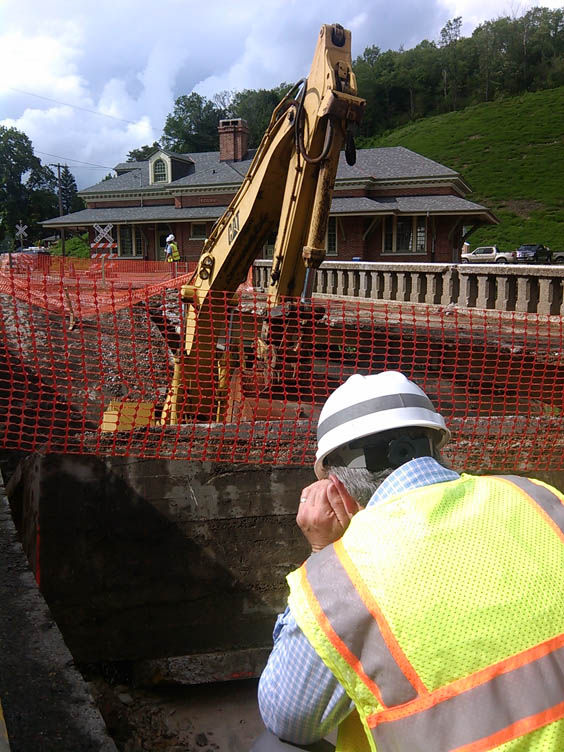 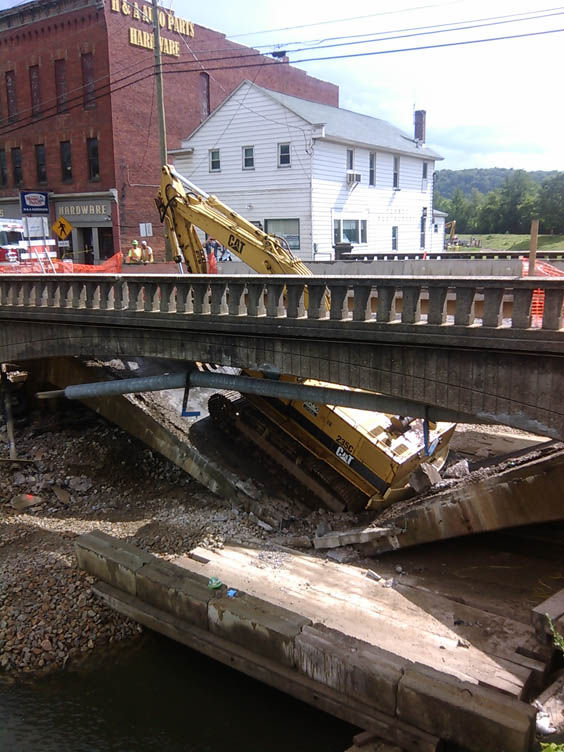 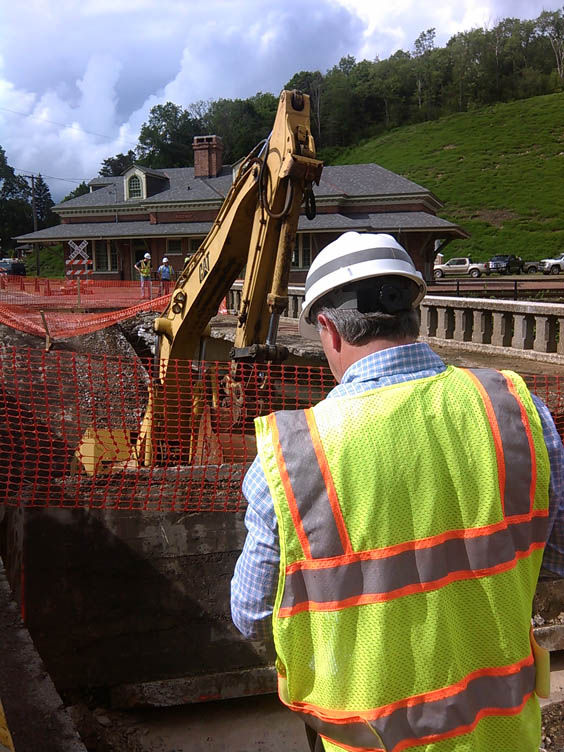 Construction workers, along with emergency crews and Pennsylvania Department of Transportation officials, survey the damage caused when the Pennsy Bridge buckled and collapsed just after 2 p.m. Thursday.

The collapse of part of the “Pennsy Bridge” on U.S. Route 219 (North Broad Street) in the borough was first reported around 2 p.m., along with traumatic injuries to several workers on or around it at the time.

A widely circulated surveillance video from a nearby hardware store shows two workers walking near a large piece of excavating equipment on the bridge’s northbound lane when the road suddenly gives way, swallowing all three. Reports about the placement of the third worker injured in the collapse are conflicting.

The identities of those involved were not immediately clear. Officials with the contractor, Francis J. Palo Inc. of Clarion, confirmed one as a company employee and the other two as subcontractors. No other information was immediately available.

In the hours after the collapse, Paul Roman, a Francis J. Palo Inc. spokesperson, told The Era there remained more questions than answers regarding the cause.

“We really don’t know what happened,” he admitted.

According to Roman, crews were demolishing half of the bridge, as planned, on Thursday when “it just buckled.”

The work, which began in March, was part of a $2.2 million replacement of the bridge’s superstructure expected to finish-up in October. And while at least half of the bridge remained open to traffic throughout, there were no pedestrian vehicles on it at the time of Thursday’s collapse, and no other injuries reported.

The bridge, built in 1912, carries an average of almost 5,600 vehicles daily across the Elk Creek in downtown Ridgway, a Pennsylvania Department of Transportation release states.

Replacing the aging span would have allowed the state to remove it from Elk County’s structurally deficient list.

Now, inspectors are rushing to determine whether the portion left standing can safely reopen to traffic and, if so, how soon.

Traffic in the borough was being rerouted away from the bridge via a nearby bypass on Thursday. Elsewhere, a detour on Route 219 in Johnsonburg, directing drivers toward St. Marys, remained in effect overnight, and possibly longer, according to PennDOT’s maintenance manager in Elk and McKean counties, Dave Matheson.

This as PennDOT awaits the arrival of state inspectors tapped to review the Pennsy Bridge scene and what’s left of the bridge itself.

The results of their inspections and their recommendations will be made public through media outlets like The Era in the coming days, officials said.

In the short term, Matheson said county maintenance crews would be stationed at the bridge overnight Thursday to ensure it remained off limits to vehicle traffic. Some foot traffic was being allowed through, however, on the western half of the bridge, containing the southbound lane, which remains standing.

The scene was swarmed with bystanders, emergency responders and PennDOT officials Thursday afternoon, many looking on in disbelief at the fallen roadway, split in two sections that dropped in a “V” shape toward the creek some 30 or 40 feet below. Laying atop the resulting heap of concrete was a roughly 20-ton hydraulic excavator. The machine’s weight is suspected by some to have caused the bridge to fold, while officials say it’s too early to tell.

Despite the physics involved in the collapse, owners and employees at the H&A Hardware store a few doors away said the sound barely registered.

“All you felt was a little bump,” said one who declined to identify himself for this article. “It was nothing cataclysmic.”

Nearly two blocks away at Kunes Auto Sales & Service, also on North Broad Street, owner Steve Kunes said, “We were right here, I didn’t hear anything. We didn’t hear no big bangs or big explosion, no nothing.”

Kunes added, “But we heard the sirens.”

A massive emergency response ensued, with Ridgway fire chief Scott Pontious listing crews from St. Marys, Wilcox and Johnsonburg among those who flocked to the scene.

Upon their arrival, Pontious said crews encountered three injured construction workers at the site, saying one was taken by medical helicopter and the other two taken by ambulance to area hospitals.

“The deck collapsed and they all fell,” the chief said. “There’s decking underneath so they didn’t end up in the creek. They (the contractors) had decking across the creek to work on the bridge from underneath and they (the workers) landed on it.”

Pontious estimated the fall at a distance of 20 feet, and clarified none were trapped under the fallen portion of the bridge as initially reported.

Unofficial reports indicate one worker suffered a head injury, a second a sprained ankle, and a third shock.

A Ridgway Ambulance Service employee, who declined to give his name saying he was not authorized to discuss the incident publicly, said the most seriously injured man was taken by ambulance to a waiting medical helicopter. A second man was reportedly taken by ambulance to an area hospital, while a third victim, capable of walking on his own, was also hospitalized, but only as a precaution.

Boy charged after his younger sister was stabbed

Amid the flurry of activity, local paramedics also responded to a heart attack at the Ridgway firehall, the employee said, located just feet from the downed bridge.

It was not clear if the heart attack was related at all to the bridge collapse or a house fire in the borough hours earlier, the ambulance service employee stated.

In the hours after the collapse, though, questions began to surface about what impact near record level flooding in May of last year might have had on the already structurally deficient bridge, and whether the introduction of heavy equipment, like the excavator, left it an accident waiting to happen.

They included resident Raymond Tegano who, in a phone interview with The Era, said, “They knew the bridge was damaged in the flood … It’s common sense, why take big heavy equipment with tons of weight across a damaged bridge?”

PennDOT officials who signed off on the project weren’t as quick to assign blame.

Assistant district executive of construction with PennDOT, Ben LaParne, said the contractor overseeing the project was compliant with a construction plan approved by the department and its consultants.

Whether the hydraulic excavator’s placement on the bridge had any bearing on its collapse remains to be seen, he added.

LaParne said state inspectors will begin work today to determine those answers, as well as the extent of the damage and potentially the need for further travel restrictions locally.

The inspections are expected to last a few hours.

“At this time (the bridge) will remain closed until (today) when we can have our experts come in to do a structural analysis and a very thorough, comprehensive review,” he said.

LaParne said it didn’t appear the collapse had damaged the bridge’s western half, or southbound lane, explaining both sides and lanes had been previously separated in a seam cut up the middle as part of the ongoing construction work.

As a result, LaParne said damage done to the southbound lane by the northbound collapse appears unlikely or, at least, minimal.

Back at Francis J. Palo Inc., Roman said the search for what caused that damage is likely to take more time, adding, “it will probably be a while before we know everything.”